Why The U.S.A. Should Not Have Banned Alcohol | Teen Ink

Why The U.S.A. Should Not Have Banned Alcohol

From 1920 to 1933, alcohol was banned in the United States of America. This period of time, also called Prohibition, should not have happened because alcohol was not a very huge problem; it did not help the economy, and it was not complied with anyway.

Alcohol abuse had always been an issue; as long as there is drinking, there will be drunkards. The amount of work, time, and money poured into keeping liquor out of the U.S. could have been put to use aiding the homeless, rebuilding roads, or helping charity programs. Gangs and violence were a larger problem at the time as well as economic issues in 1929.

Banning alcohol, while it may have put some wives’ minds at rest, did nothing to aid the economy. In fact, gangsters profited largely by selling illegal alcohol. When alcohol was banned, those who worked in factories lost their jobs. When the money normally made selling liquor (then, about $500 million annually) vanished from the market, the government was impacted by the loss.

However many dollars the government put into it, alcohol never truly disappeared. Bootleggers ran the coastlines and sold imported liquors. Gangs smuggled it, as well, raking in a tidy sum. People created homemade wines; moonshiners drove drinks to customers in other areas in cars that they enhanced so they would have a greater chance of getting away from the authorities. Some will always go to great lengths to break the law. Prohibition was no different.

If alcohol hadn’t been banned, think about how much better Budweiser or Sam Adams would be if there had been another 10 years to work on the formulas. 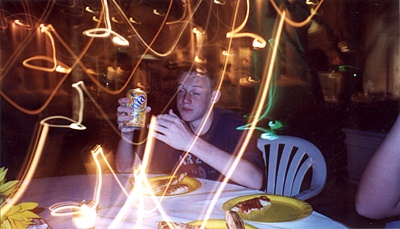 The author's comments:
Ha. this was an entertaining piece to write.
Post a comment
Submit your own

View profile
?? I know. I wrote this about why they shouldn't have done it back then. And the can seriously looked like beer when I chose the picture. I already explained all this!!
Youdontknowme said...
on Mar. 10 2010 at 7:49 pm
America already tried banning alcohol! It failed in epic porportions. We ended up sneaking it behind the government's back and it caused WAY more problems than it fixed. And seriously, the guy in the photo is drinking Fanta, not beer. Its just him blinking as the picture was snapped.
hyperactivemayfly PLATINUM said...
on Mar. 9 2010 at 7:54 pm
hyperactivemayfly PLATINUM, Arlington Heights, Illinois
29 articles 0 photos 36 comments

View profile
hey, sorry if the picture doesn't make sense. I thought it was a can of beer he's holding, but now that I can see the picture more closely, it's Fanta. Whoopsies.