In the 19th century, if you asked a thirteen year-old boy what they did in their spare time, they'd probably talk about helping their parents on the farm. You ask the same question to a teen in the 20th century, and you'll get an earful about baseball, double-dutch, and pick-up sticks.

But now we are living in a new millennium, a millennium where 97% of children ages 12-17 would reply 'videogames' to that question. To me, this massive percentage is horrifying (99% of boys and 94% of girls), yet some will sense nothing wrong with it. These people frequently argue, 'But videogames aren't that bad,' 'they're not actually harmful to the body,' or 'some games improve hand-eye coordination and analytical thinking skills.' Granted, video games often appear harmless, but they can be very damaging to children and teens who are lacking in self-control.

The dangers of video gaming can be summarized into one word: addiction. Guilty pleasures like video games, television, and candy are tolerable when done in moderation. The problem with video gaming is that unless controlled or limited by a third party, it's both chemically and mentally addictive. Studies have scientifically shown that excitement from playing video games causes the human brain to release an addictive chemical. Psychologically, video game addiction is explained through what is called 'the God effect.' This simply means that players receive the ability to control and manipulate everything in the game, something very attractive for teens without substantial influence in the real world.

Unlike other addictions such as tobacco, marijuana, or alcohol, video game addiction has yet to attain major publicity. The reason is probably due to the how smoking and drinking accumulates direct physical injury, while video games conjure minimal damage to physical health. However, I believe video game addiction endangers victims equally as much as substance addiction.

Compared to tobacco and heroin, video games require much more time to actually perform the addictive act. Smokers often engage in other activities with a cigarette between their lips, but video gamers do not have the same privilege when gaming. Studies show that the average male gamer plays for around six to eleven hours a day on weekends and about an hour on weekdays. This excessive time consumed on video games is time that could have been spent doing homework, playing sports, or even being with friends.

Furthermore, wasting hours a week playing video games endangers an individual's chances of achieving their full potential. A teen who possesses the intelligence and talent to become a future Nobel Prize recipient may have to settle as an ordinary science teacher because he wasted too much time gaming as a youth. This waste of talent hurts not only the individual, but also society as a whole.

Video game addiction, similar to substance addiction, contains enough hazards to critically corrupt one's life. An example is found in Elyria, Ohio, where a seventeen year-old boy named Daniel Petric shot his parents in the head after they confiscated his copy of 'Halo 3.' His mother was killed and his father wounded due to the gunshots, and the troubled teen fled the murder scene with solely one item in his possession: the 'Halo 3' game. Petric may exemplify one extremely severe and uncommon case, but there are countless adolescents in our nation suffering from video game addiction. These kids often find themselves without friends or interest in any other hobby, and their lives without meaning other than gaming.

Besides its pervasiveness, I believe the most dangerous aspect of video game addiction is the lack of awareness. Currently, many parents in the United States see nothing wrong with video games; some may even believe that gaming benefits their children. Little do they realize that major game manufacturers hire expert psychologists to study their games and ensure that each game contains addictive components (similar to what tobacco companies did with their cigarettes).

Video game addiction is a relatively new discovery, and the amount of publicity focusing on it will gradually increase. But as consumers, we should not wait until video games are publicly acknowledged as harmful and addictive. Parents need to start limiting their children's time spent on gaming. Wellness classes in schools should include a section about non-substance addiction (like video games) in their curriculums. We must raise awareness about the harmful effects of prolonged gaming before it becomes game over for our youths. 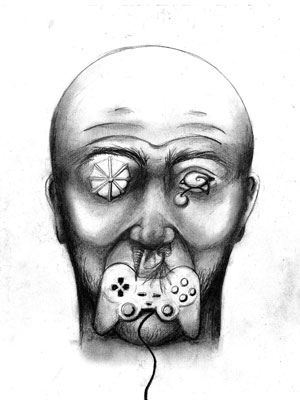 Favorite Quote:
"when the power of love overcomes the love of power the world will know peace."

Favorite Quote:
"During the 1960s, I think, people forgot what emotions were supposed to be. And I don't think they've ever remembered."
-Andy Warhol

This article has 24 comments.

Favorite Quote:
Success doesn't come naturally;you must work for it.

View profile
I suppose I became one of the lucky ones. I used to play those all the time. Now I prefer watching TV. Does that make me an old man yet? Hey, gotta be better than what my cousin does, which is sit around on his laptop playing Minecraft all day(a very stupid game too, might I add). A better hobby is reading books.
lad7845 said...
on Apr. 9 2014 at 12:54 pm
i think that kids having video games as an addiction is okay because there is less of a chance for them to become addicted to drugs and alchole just things like over using them can be a problem so mabey make game that are fun not addicting and the same style and funness like every one wants anf for all ages like Mature games make some thing fun like gta 5 some thing to enjoy and to have fun i am gamer and play these games but i learn when enough is enough but some people need to learn when to quit its like an harmful addictive
Riverr said...
on Apr. 8 2014 at 11:14 am
i play alot of games and i know about 15 people on my xbox that are girls and most guy so in my eye its 50 50 on this
bigappleheaert said...
on Feb. 12 2013 at 2:17 pm
Where did you find that statistic from? I only know one other girl who plays video games and many guys I know do not. So the one percent of guys who dont and the six percent of girls who don't seems a little off.
deon14000 said...
on Dec. 17 2012 at 11:53 am
hey im writting an essay on this kinda thing what are your sources?
Dj_FRANZUA said...
on Oct. 11 2012 at 2:21 pm
I really like playing video
games but I dont think that
everyone is addicted to games
Left4Dylan2 said...
on Feb. 13 2012 at 9:38 am
Okay from aside from my screen name, No I am not addicted to video games in anyway, I get about an hour of game time on the weekends. however, I wanted to state, that in the section of the article where it said that the child killed his mother over Halo 3, I remember seeing this on T.V. 1. His father forgave him because he is a priest or something 2. It wasn't because of the game, or his game addiction, it was the fact that he had anger management and he found it unreasonable to have it be taken away. Its a invalid statement.
nishi321 said...
on Jan. 22 2012 at 11:22 am
i think itz really correct coz once we get addicted 2 dis, itz so difficult 2 trash it from da mind..
rockyraccoon said...
on Jun. 17 2011 at 9:24 pm
rockyraccoon, Fort Wayne, Indiana
0 articles 0 photos 54 comments

View profile
the sun gives skin cancer you can crash a bike or other horrible injuries. video games are not evil and not bad some clearly marked games shoulfdn't be played by little kids but still. Also their are people who ruin their lives with outdoor games people who become obsessed with sports.
Shikidara said...
on May. 27 2011 at 10:46 am
Personally, I agree with this opinion. Video games do hurt our youth. The only thing that I think isn't that bad is playing an hour or less a day on weekdays, after you've done what you need to do. But 6 to 11 hours of gameplay is utterly outrageous and baffling. Parents really need to start paying attention to their children, because a child shooting their parents over something an unimportant is "Halo 3" is unacceptable. We need to wake up here, because if we don't, we could be ruining the lives of the new generation, and they may come to cure cancer!
Leusky said...
on May. 2 2011 at 11:17 am
Leusky, Atglen, Pennsylvania
0 articles 0 photos 1 comment

Favorite Quote:
If your not first your last.

The number on average needs to lowered. Now kids in K5 are addicted to video games.

2. another thing you should include is the fact that some kids become addicted because they have a crappy life style and instead of turning to books to escape their reality they're now turning to video games.

Great article! I usually don't read article this long on the computer but this was great!! Keep up the good work! :)

View profile
True, videogaming can have an effect of death on the mind. People are disconnected from reality and plug themselves into a world mistakes an be rewritten. So much potential and focus is lost from the lack of productivity.