On a March afternoon in 1980, a young woman calling herself Joan Jett sat in the office of a record producer, awaiting his response to her debut album. Dressed in tight black jeans and a T-shirt, with shaggy hair falling over her forehead, she was an unusual sight. This was probably the seventh major record label Jett had visited in the past month, and when the producer's reply came – “I don't think people would be interested” – she was hardly surprised. This was what every record producer had told her. Apparently, they believed the public would never take a female punk-rocker seriously. They thought only men play punk rock! Jett gave up trying to be signed. Eventually, she released an album herself, without the help of uncooperative labels. The self-titled album was met with great success both critically and by the masses. It is now considered one of the greatest, most influential records in rock 'n' roll history, and its creator is one of rock music's best talents.

It is impossible to deny that we live in a male-dominated culture. This impacts rock music in the same way it affects most forms of art and science. The growing strides of women in rock music reflects the general trend. Examples that break the mold, like Joan Jett, are rare, but they prove that women can excel in areas traditionally dominated by men. Nevertheless, women have still not gained adequate ground in rock music because of these long-held sexist stereotypes about women not being able to rock.

How do we define rock? Darwin would be happy to hear that rock – like many things – is constantly evolving. What it was in Woodstock '69 certainly isn't what it is now; Janis Joplin isn't all that similar to Florence Welch. But rock music is still generally based around the blues, typically incorporating a guitarist or two, a vocalist, a bassist, a drummer, and sometimes a keyboardist. What sets it apart from pop music, though, is powerful lead singing and a focus on the instrumentalists as well as vocalists. Also, rock is quite a bit heavier than pop.

As a girl in a rock band, I obviously have a personal stake in this debate. My own experience comes from traveling to many venues to play gigs. Often we are one of several bands. At these shows, our band is an anomaly; the girls in our group outnumber the boys by a 3:2 ratio. Most of the bands we play with are all-male. However, I've found that the audience is always receptive to women in bands, and always encouraging. In fact, the audience tends to be overly supportive. After shows, people always come up to me, saying things like “You rock, girl!” It's impossible to ignore the surprise in their tone, the subconscious condescension. I'm reminded of something one of my good friends once told me: “Wow, you're such a great guitarist – and you're a girl!” Clearly, most people are not used to seeing female rock musicians. So when they see a woman who, for example, plays guitar and is talented, they blow it out of proportion. While it's nice to be appreciated, I think girls in rock bands are admired for all the wrong reasons. The value of their talent is diminished because the crowd sees them as a charming novelty.

This situation is caused by the fact that in the rock genre, females are grossly underrepresented. If I think back to my inspirations, the musicians who made me want to play in a band in the first place were Freddie Mercury, Slash, Jim Morrison, and Gerard Way – all men. It wasn't until I got more involved in the scene that I began to appreciate the insanely talented female rockers in bands like Heart, Joan Jett and the Blackhearts, and Fleetwood Mac. Despite these amazing examples, there really is a limited number of women in rock. If this number were to dramatically increase for whatever reason, the “trophy” status of rock chicks would disappear. Then perhaps they would start being appreciated for what truly matters – their musical ability.

I can't help but compare this situation to other professions and pastimes. In most careers, woman work under the shadow of men. We can blame this partially on sexism, but other factors are in play too. Both intrinsic and societal pressures may hold a woman back from developing an interest in certain fields, including rock music. The idea of intrinsic gender traits is speculative and controversial. Gender identities are established early in life, usually by about the age of three; most children pick either male or female and act accordingly. These socially reinforced gender identities have traditionally steered women away from rock.

For instance, rock stars are generally perceived as “bad.” Their lifestyle of sex, drugs, and rock 'n' roll is extremely self-destructive. Sleeping around and getting high aren't exactly respectable ways of life for an average person. But the debauchery associated with rock music – whether it's trashing expensive hotel rooms like Axl Rose, or snorting cocaine off strippers' bodies like Nikki Sixx – is considered glamorous. However, this sort of promiscuity and reckless self-indulgence contradicts society's vision of the ideal woman, who is supposed to be sweet but sensual, perfectly poised, and polite. Women are supposed to selflessly nurture their children and be supportive wives. If they engaged in stereotypical rock-related activities, they would be seen as negligent mothers or crack wh---s. This is obviously not a flattering perception, so it's no surprise that few women have pursued this image.

In a more positive light, though, rock chicks are depicted as cool and sexy – confident girls you do not want to mess with. However, it seems that most women are not drawn to this image either. It blurs gender roles, bordering that of men too closely. Women tend to gravitate toward musical genres like jazz and pop, which portray them as more feminine. Exceptions to this rule may stand out as unique, but recognition comes with consequences.

In the late 1960s, when Janis Joplin was an up-and-coming music star, her raw, powerful voice caught the attention of many. Her gravelly vocals set her apart from the gentle, sweet voices of female singers like Joni Mitchell. She was not looked down upon by her male peers; rather, she was seen as one of the men. This had horribly detrimental effects on Joplin, who was already plagued by body-image issues. She felt unattractive, since people didn't seem to acknowledge her femininity. By the end of her life, Joplin was a depressed, bulimic heroin addict, dying at 27. Her talent gives her fame today – but at what price? Is a female rock musician no longer a woman? The sacrifices women must make to succeed in a man's realm is huge; they risk both their reputation and gender identity. This certainly contributes to the dearth of women who rock.

With the advance of the progressive twenty-first century, one would think that more women would be willing to defy stereotypes. After all, as the number of women in the work force continues to grow, gender stereotypes are being tested and broken every day. And to an extent, the future is looking bright. The number of female rock stars has increased in the past few years. Bands such as Paramore, Grace Potter & the Nocturnals, and Florence + the Machine are gaining strong followings – not because their lead singers are women, but because they are great. However, the rock scene is still run by men, and unfortunately, it seems to be dying away. The music is becoming lighter, drifting closer to pop rather than returning to its roots. Most popular modern rock songs are either extremely poppy or written by old rock bands.

It's time for a new wave of musicians to step up. Men have had their turn dominating the genre. Now it's time for the women. An influx of women into the genre could cause a rock 'n' roll revolution. These days, do-it-yourself producing and releasing possibilities are endless; online music selling and sharing makes this even easier. Women have a lot of options now – it's time to act. The image of the female rocker should be of a strong, competent woman, but most importantly, a true musician. Women rockers shouldn't be compared to the old stereotypes. It's more than clear by now that women, too, can rock. 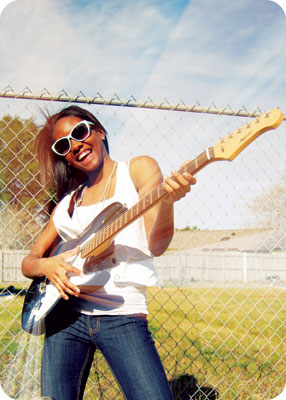 Favorite Quote:
"when the power of love overcomes the love of power the world will know peace."

cami_cook314 BRONZE said...
on Oct. 1 2014 at 9:51 am
cami_cook314 BRONZE, Bremen, Indiana
1 article 0 photos 8 comments
View profile
I think that this article is really relatable for girls looking to get into the rock music or the music business in general Because Men Playing Punk Rock or Rock Is So sterotypical, but thanks to Joan Jett she has inspired many of the women in the music industry today. And most of my music role models are men. (Jim Morrison)