Some say that "a short video sometimes can completely alter your mindset." It was not that video but a philosophy that it led me to. While looking for inspiring stories of women, I came across your story, Simone, and the masterpiece "The Second Sex" that you have authored has completely changed my personality by shattering the myths and assumptions that could take me back to the primordial state of women. It may be true that society has transformed since your time; most countries have conferred women voting rights and many other rights and opportunities that have liberated them from the burdens and institutions that were undermining the efforts of women and not letting them fulfill their potential. Nevertheless, what is saddening is that the position of women in present-day society still remains deprecated. Another interesting fact is that they willingly continue to be subjugated. Your attempt to compare the relationship of women and men to that of master and slave as both the pairs have a functional relationship, which is they are mutually dependent on each other, is not genuinely relevant today as the opportunities granted to women have expanded. The minds of many fathers, husbands, and brothers have been enlightened though there are a sizeable group of men who still want to subjugate women and confine them to household work. But the fact that most of them have changed can be proved by the increasing number of women enrolling in educational institutes within the last fifty years. Yet, the problem lies in the minds of women who are struggling to liberate themselves from the model that society has inculcated in their minds. They are on their own prolonging the concept of eternal Feminine. In essence, they aim to re-create the archetype that no longer exists in many cases. (Despite this, I want to remind you again that dominant men still exist.)For instance, a friend of my mother used to call her and incessantly complain that her husband is not giving her enough time and importance, while the husband is a doctor and works almost twelve hours a day. It was not so that the woman wanted her husband to stop work, but more importantly, she does not have a world of her own. Simone, you have proposed that women were previously deprived of education and employment, which created the need to pursue the man's interest and quarrel for his attention.

Nonetheless, it is not a lack of education in the case of my mother's friend as her father is very supportive and made her graduate with a professional degree that many men are willing to give lives for. But she failed to create her own world in which she could be busy like her husband and have an equal relationship with him in which both would be living to spend time with each other but within limits that their work imposes on each other. This type of relationship, I believe, would create a healthy functioning human being, be it a man or a woman, as they would be having love and work in the proper proportions.

Previously there were advantages to being the other. For example, women could easily be married, not employed, and depend on their husbands for economic reasons, protection, security, etc. But now, at least in the urban society, there is pressure on women to study, find work and be independent even though there might be many exceptions. There is a decrease in the chance to consider themselves as the other. Nevertheless, the rural society of my country and some urban families continue to view women from the perspective of eternal Feminine and limit their movement towards independence.

A psychological study claims that as the prejudice against a victim group continues, it starts to accept the myths that the dominant group attributes to them. In some cases, men continue subjugation, and women actively try to fit in those roles to please men, and they start believing it is not their cup of tea to study, find work and be independent. And in this case, too, women begin to take the myths men have created. For instance, the myths like women are controlled by hormones; they tend to be emotional; hence they are fit for nurturant jobs like nursing. But even a baby can understand that nursing is more physically demanding than creating blueprints for dams. Hence, the position of women has still not changed in many aspects. To change and liberate themselves completely, it is not enough if just a few women protest. As you claimed, they should be in a state of solidarity with all other women, from all classes and groups. Revolution should arise in each, and every mind and women should break the shackles that society imposes on them and go beyond being prudent, for it only leads to mediocrity, as you have said so. For this to happen, fathers and mothers should teach their girls that a prince would not come on a horse, marry her and provide for her, but she has the capacity of taking herself to the moon, and she no more has the burden to please others, but of herself. And parents again have the responsibility to teach boys that women's personal choices should be respected. This reminds me of an Indian actress divorced by her actor husband just because she revealed too much of her skin. And that actor is a hypocrite, who later in a movie danced with women, objectifying them vulgarly. Marriage is an institution that depends on a person's choice, and they should enter it only if they are willing, which will lead to happiness for both the sexes.

Lastly, Simone, thank you for making me realize that I am a being, complete, and need no man to define or complete my existence 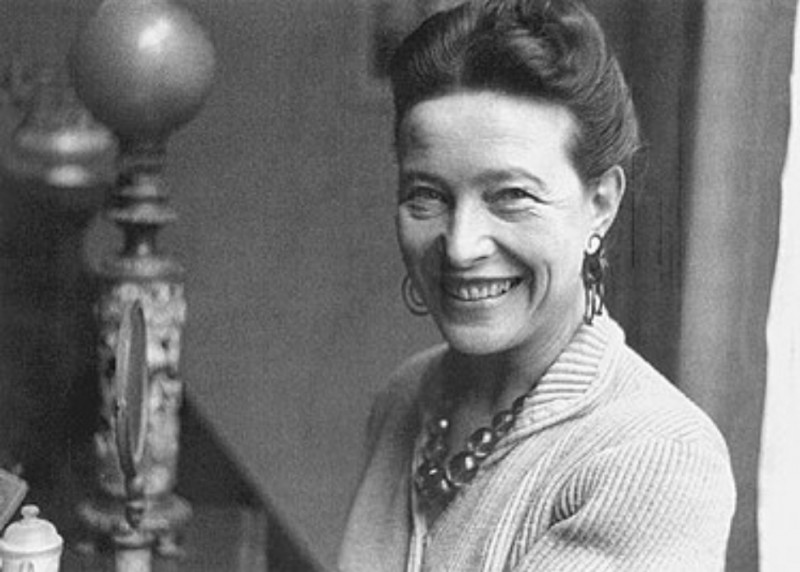 My letter to Simone De Beauvoir on the occasion of women's day.