11/11/11
It’s always better to be small. Even if you’re already small, you must become smaller. If you’re as small as you can possibly be, work harder, because you have to get to the smallest size possible. Then, maybe just maybe, you will achieve the ultimate goal: skinniness. It’s not natural, and it’s not comfortable, and its really not all that attractive, but it’s a trophy and you’ve earned it and you are the best. The skinniest and the strongest. Right?

This is what society tells us, at least. Why be a size 8 when you can be a 5? Why be a 5 when you can be a 3? And so on and so on. Take, for example, Carrie Underwood. A beautiful and talented young lady with a bright and youthful smile, a normal size 6. A small size, actually. But, she loses 20 pounds and they plaster her on every magazine in the country with headlines declaring her to be fit and healthy; after all, she’s smaller and skinnier, so she must be healthier, she must be better off. A size six is heavy compared to the beautiful size 2.

In our society collar bones jutting out and the faint outlines of chest bones and arms without an inch of fat on them and legs with a gap between them are the ultimate goal. This is what the media declares as beautiful. Even in simple catalogs like Kohl’s and TJ Maxx twelve-year-old girls with legs like toothpicks and collar bones jutting out are put on display. Their clothing lays flat on their fat free bodies, and that is perfect. That’s what everyone wants. At least, that’s what they tell us we should want.

Even though magazines supposedly condemn lethal diseases like anorexia by plastering women one their magazines saying “she can’t eat!” and “down to 93 pounds!” They’re also putting them in the spotlight, giving these sick women attention and media power. In a strange, indirect way, they are saying, “look how powerful these women are. They are the skinniest, almost no one else can diet down to their size.” And this sends the message to some girls and boys and men and women that skinniness is power. And, the sad thing is, its true. When do you see someone in a commercial, a magazine, a movie that isn’t extremely thin?
Occasionally one sees a woman with an incredibly voluptuous figure. That is, they have large chests and flat stomachs and sexy hips. A figure that is probably one of the most rare body types in the world. But, the media claims they love curvy girls. Sure, as long as they have flat curves, no extra fat anywhere except their breasts. What about the women with figures that the media doesn’t deem perfect?
They plaster celebrities like Gwyneth Paltrow on magazines and say they have the hottest beach bodies; women who are so skinny they’ve lost their hips and their chest and are androgynous. But the ones who need to lose weight are ostracized and photographed at awkward moments like when they’re bending over to grab their towels. They’re not skinny enough, and therefore not good enough.
Society teaches us to be ashamed of our bodies. We admire the women who have lost twenty pounds of non existent fat; when Jennifer Hudson, a talented, beautiful women lost a lot of weight, we all glorified and praised her and put her up on a pedestal as if to say, “if she can do it, so can I.”
The point is, no matter what size we are, we should love our bodies. It’s hard enough to do this on our own, let alone when the media puts up these emaciated women as sex symbols and goddesses and say we should look like them. What if we don’t want to? What if we want to eat what we want, eat intuitively and have fun and hang out with friends and go to school and work and see a movie and go to the mall and eat a cheeseburger and be the size we are meant to be, without having to worry about our thighs being too big or our arms too pudgy or our stomachs not flat and concaved.
What if we could just be ourselves? What if women in film and TV shows and hosts were all different shapes: pears, apples, bananas, hourglasses, light bulbs? Occasionally you would see a very thin girl, but you would see the other bodies also, maybe you would even see one similar to your own.
I repeat: what if we could simply be ourselves, be us?
After all, isn’t that the most beautiful way to be? 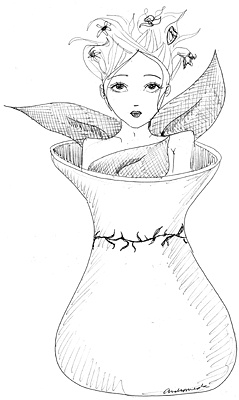 The author's comments:
I have always felt very strongly about this issue. Yesterday, I was watching TV and saw an extremely skinny, too thin girl as a hostess on an entertainment segment about celebrities. It riled me up, so I wrote this.
Post a comment
Submit your own

Favorite Quote:
"I think we should put some mountains here, otherwise what are the charecters going to fall off of."
-Laurie Anderson

View profile
This is excellent!  What a well-written article about a very important topic.  I wish more people could agree with your strong words and love themselves for how they are.