Favorite Quote:
"Welcome to the internet where having an opinion is like a declaration of war"

Horse racing is called the sport of kings, we have enjoyed it for a millennia. Horse racing in the United States and on the North American continent dates back to 1665 on a Newmarket course in New York. Race tracks haven't always been the fancy well organized places they are today. Used to be just an open field and a couple of people just having fun and betting.
I love when racing season starts, the excitement of it all. Who will win that year's Triple Crown? or go home with the title of Horse Of The Year? Everything from the small jockey's in their colorful racing silks carrying their whip while the strap to their helmet is loose around their chin to the lean thoroughbreds prancing out to the tracks. The welcoming sound of the bugle and the big hats worn by the rich ladies to shade the sun from their eyes. The fast adrenaline rush of the bell ringing and the announcer "They're off!". You watch on the edge of your seat as they bound the backstretch racing towards the second turn speeding down the homestretch fighting for the wire. Their hooves like thunder against the hard dirt.How can you not fall in love with that? The most excitement is in May and June. Ahh it starts with the Kentucky Derby, than the Preakness Stakes right along after it, than the Belmont Stakes. The Belmont being the hardest jewel for the crown with the track being 1 1/2 miles long. So many horses have won both the Derby and the Preakness than come to finish dead last in the Belmont.
Take a look at this year's movie, Secretariat, god now that's some excitement. He was bred by the Meadow right here in VA by Bold Ruler and SomethingRoyal, two wonderful horses. Altho Bold Ruler was a fast sprinter, not much of a long distance kinda horse. His other offspring had great speed but lacked the stamina to make it.
March 30, 1970 that firy red colt was born. Who knew he would surprise everyone in three years. 1973 he is entered in the Kentucky Derby he wasn't the only crowd favorite as he had a tough battle against Sham. The Preakness Stakes him and Sham fought for the wire. But the Belmont, that was his shining moment. June 9, 1973 a day NO ONE will ever forget. The day Secretariat beat all odds and stamped his hoof print in racing history. Secretariat was sent off as a 1–10 favorite. Only four other horses competed against him that day, Sham being one of them. Usually Secretariat laid back in every race. But that day he jumped to the lead, everyone thinking "he's going to fast, what's he doing?" knowing ALL of Bold Ruler's offspring never lasted in such a long distance.Secretariat and Sham set a fast early pace, opening ten lengths on the rest of the field. After the 6-furlong mark, Sham began to tire, ultimately finishing last when no one crossed the wire. Secretariat kept getting faster and faster and in the end with jaws dropped won by an outstanding 31 lengths and ran the fastest 1½ miles on dirt in history, 2:24 flat, which broke the stakes record by more than 2 seconds. That was a king, a king of the 20th century, one of the greatest horses ever known.
Horse racing, no one loses the excitement. Each year brings new horses, maybe new champions. And every year, people search the auctions looking for the one, spending millions on a 2 yr old not knowing if they're going to even be worth the time, if they make money or show themselves to be great dams or sires to the future generation. Yes great champions have come into this world, made their imprint and have shown the qualities of pure royalty. It's wonderful. And I hope others will see how really spectacular this sport truly is.As Horses will constantly be racing down the field, their manes flowing along with the wind, jockey and equine being one whole, they will bound down tracks breathing hard, pounding the ground. Forever will this be the sport of kings as it always has been. 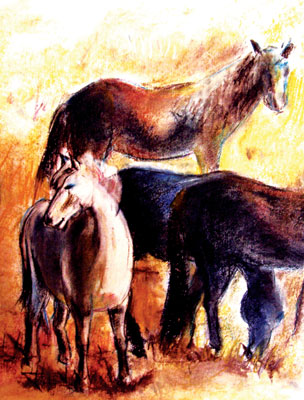 The author's comments:
I haven't seen where anyone wrote an article on horse racing, it's such an exciting sport to watch. And jockey's are considered one of the best athletes, because they need so much balance, strength and skill. I love it. :) im not good at articles but i hope people will like it. hopefully
Post a comment
Submit your own

Favorite Quote:
"Welcome to the internet where having an opinion is like a declaration of war"

View profile
thanks. :D yea I'm a HUGE horse racing nut, I've never been to one, but  iwatch it occcasionally on T.v when they actually decide to show it, but it's exciting. :) and for something only being usually 2 minutes long ALOT of things can happen.
Jacebass GOLD said...
on Feb. 18 2011 at 9:42 am
Jacebass GOLD, Chelsea, Michigan
10 articles 0 photos 3 comments

View profile
this is really amazing. im not a horse fan, but i have to say this made me want to watch a horse race