I opened my eyes and watched the snowturn red. I felt a sharp pain in my jaw. When I put my glove to my mouthit, too, turned red. I sat there, wondering how I got myself intothis.

This competition was not like the others; it was my bigchance to be sponsored by one of the two biggest snowboard companies inthe sport.

As I went with my dad to sign up for the competition,I took a long look at the jump. It was huge, 10 feet high with a 20-footgap to clear. When my dad asked, "Are you sure you want to dothis?" I stuttered, "Yeah." It might be my only chancethis year to be sponsored.

When I finished with the paperwork,they handed me bib number 37. There were only three people in mydivision.

Soon it was time to start practice jumps. Everyone hadthe choice to take at least one, but I chose not to. That was amistake.

At noon the competition officially began. My divisionwas first; the two girls I was up against were both 21 years old. Thisdefinitely increased the standards. The first girl approach-ed thestarting gate showing no sign of fear. She pulled out of the gate andheaded toward the jump. She launched, pulled a 360-tail grab and landedperfectly.

The second competitor rode up to the gate, her handsclenched into a fist. Her teeth started chattering and she yelled out,"I can't do this." Her friends reassured her she could. Afterfive minutes she was back up to the gate. She roared out of it. When sheflew into the air she pulled a backside 180-nose grab and stuck thelanding. At this point I knew I didn't stand achance.

"Monica Gemmiti, number 37, the youngest femaleparticipant," the announcer called. I approached the gate, my kneestrembling, my mouth dry and my palms sweating. The spotter asked if Iwas ready. I shook my head, and he counted down, "Three, two, one,go." I busted out of the gate and hit the jump with so much speedit threw me over the 15-foot pole. I pulled a huge Japan air; all I hadto do was land it and everything would be perfect. I started gettingcloser to the snow, bending my knees to absorb the impact. When Ifinally hit the snow the force made my snowboard slip out from under me;my head snapped forward, hitting the edge of my board. The crowd wassilent. The snow was red. I brought my hand up to my mouth; my gloveturned from blue to red. After a few minutes, I got up and the crowdsighed with relief.

The only damage done was that I couldn't eathard foods for two weeks. (I hit my mouth so hard.) The worst thing wasthat I blew my big chance at being sponsored. I really regret not takingmy practice jump. 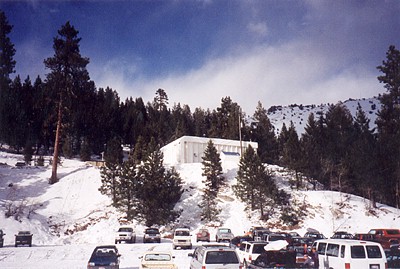