Becoming a professional athlete is something mostpeople only dream about. Working at a baseball academy, I recently hadthe opportunity to discuss the challenges of reaching that dream with afew major league players.

New York Yankee outfielder JasonRobertson knows what it takes to turn a sport into a career. "To bea professional athlete takes a lot of dedication and hard work. If youlook at any professional athlete, in any sport, the majority put in alot of hours to learn their craft and be the best they canbe."

Being a professional athlete has many rewards.Minnesota Twins first baseman Dan Leatherman said, "The mostrewarding part is knowing you're striving to reach a goal you set foryourself. You also have such an impact on communities you play in;there's so much opportunity to give back to them."

Alongwith rewards, though, come hardships, according to recently retiredFlorida Marlins outfielder and now Colorado Rockies coach JohnCangelosi. "Being in the public eye and away from your family ishard," he said. "To be successful, you have to sacrificecertain things, and I was willing." Former Toronto Blue Jayspitcher Dave Sinnes added, "If there is a hard part, I think thechange in the season, going to college or going pro takes a lot of time.You're talking about 160 games a year and one day off a month. Thetravel's extensive and you're always away from home."

While trying to reach the highest level in sports there are many thingsto remember. Robertson says knowing your roots is important.

"Always remember where you came from, what it has taken to get youwhere you are and who was there to help you," he told me."Once we are successful, people look at us differently. We tend toaccept what society hands out and kind of forget what it took to thetop."

So what do teenagers have to do to reach their dreams?"You have to make a 110% commitment. You have to work as hard asyou can and, in most cases, in spite of what other people say. Along theway, people are going to tell you that you aren't good enough to make itprofessionally. You have to take that advice and prove those peoplewrong," said Leatherman. Robertson added, "Don't limityourself to what you can do. A lot of kids now just play one sport andtrain all year round. I played three sports, and I wasn't the best atall three, but I played them for the competition and to learn. I pushedmyself academically and athletically and didn't limit myself by saying Icouldn't do some things. I accepted challenges and took them headon."

High school athletes are already going through a lot ofthe same tough situations as professional athletes. "The toughestthing for me was the time commitment. With all the things that go on inyour teenage years it takes a lot of energy to want to go out there andplay every day," commented Sinnes. 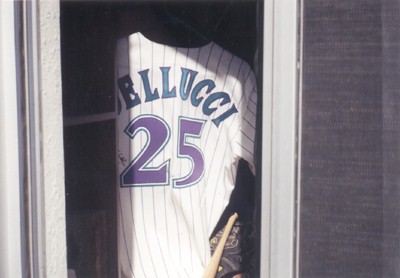 Favorite Quote:
"Somewhere people leave and don't look back...somewhere someone isn't compelled to make sense of it in a poem...somewhere the world is not like this." From T. Cole Rachel's "Surviving the Moment of Impact"