Can I just start by saying how much I dislike riding the speedline? Sure, it gets me where I need to go, but since I am both a claustrophobe and a germaphobe (and prone to motion sickness), you can see why sitting in a germy enclosed car that sways slightly as it passes over the Ben Franklin Bridge. The EDGE of the Ben Franklin Bridge, so close to falling into a freaking RIVER.

As a resident of a tiny suburban town just over the bridge from Philadelphia, I have been on the PATCO speedline many times in the past fourteen years, whether to get to the annual Macy’s Light Show, The Franklin Institute, The Betsy Ross House, or anywhere else in Philadelphia that my homeschool mother feels would make a great field trip.

The last time I took the speedline was about three weeks ago when my family and a friend’s family made a trip to the National Constitution Center for Homeschool day. That was a fun field trip, because we got mixed up with a large group of PA Cyber students, who for all I know could have actually have been holograms. My mother did not enjoy being mistaken for a hologram, so our whole little group was gleeful when my sister totally creamed a clueless cyber student in a mock presidential election.

But I am getting off track, because I am actually supposed to be ranting about how much I hate the speedline. We had to leave early to be at the Constitution Center on time, and were boarding the speedline at about nine-thirty in the morning, a morning I happened to be drowsy and irritable. There are no gentlemen during the morning commute, I discovered, because when my group boarded, so did many women, including some elderly women and a pregnant woman. Guess how many men stood up and offered their seat.

None! The whole ride, I clung to a dirty metal pole (with gloves on of course) sandwiched between my sister, a very petite woman who looked like she might faint or something. (a fellow claustrophobe I assumed.) and a large man in a feathered hat that had really bad body odor. I felt sorry for the pregnant lady, who stood a little ways off.

On the way home, my friend Kelly and I actually got to sit down by a grimy window. We talked idly as whizzed by Camden glad that we actually had air to breathe this time around. It wasn’t exactly fresh air, but beggars can’t be choosers. I was glad to reach Haddonfield Station, which was a generally nicer station than Ferry Avenue, which is the one we used to depart from when I was really young. None of the stations are nice, they all have grimy walls, sticky floors and suspicious puddles of who-knows-what-and-who-really-wants-to-know. Last December at Haddonfield station we encountered a very angry patron who was having a hard time with a finicky ticket machine. She pounded her small fists against the machine and profanities flew out of her mouth.

But leaving the subway station is like entering Narnia, you can finally breathe normal air, and dash to safety, which in my case is our family’s minivan. 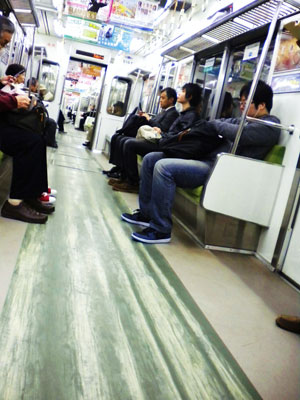