Groundhogs and Other Holiday Horrors

“Gotta get this in before the new year!” George says as he gorges himself on ice cream.

“I get it!” George snapped. “This year will be different though.”

How many of us have said that? “This year will be different.” I am guilty of saying it every January. But who sticks to their resolution? We all know George will be back to ice cream on January 3rd, even if he does want to be “The Biggest Loser.” (Not a good name, by the way.)
So, I am not big on New Year’s resolutions. But one thing I always realize on January 2nd is: Groundhog Day is in a month. You should resolve to make fun of it. I mean what’s not to make fun of about Groundhog Day? A bunch of guys in suits go out in Pennsylvania on a cold morning in February to ogle a furry little rodent named Phil. If Phil sees his shadow, it means that it is February 2nd. If Phil doesn’t see his shadow it means that in a year, it will be February 2nd.

Every Groundhog Day I wonder: What if Phil doesn’t show up? Maybe he is sick of his job. I mean having all these people staring at you first thing in the morning, not fun. Everyone, except the perky news reporters that probably have their makeup on when they wake up, can relate.
But of Phil doesn’t do his job, do they get one of the guys in formal wear to stick his hand down Phil’s burrow and pull him out? (You wascaly gwoundhog, you!) Do they revive Gus, the second-most-famous-groundhog in Pennsylvania? Gus used to be the Pennsylvania lottery’s mascot, after every commercial he would say: “Keep on Scratchin’!” and laugh a highly annoying Groundhog chuckle. (It was probably trademarked: Groundhog Chuckle™) I live right over the bridge from Philadelphia, and I have never seen a groundhog – in New Jersey or Pennsylvania – chuckle.

February also boasts a large amount of presidential birthdays. (Two.) So, because apparently having birthdays ten days apart was unacceptable, Lincoln and Washington’s birthday got rolled into President’s Day, so people could solemnly observe life, liberty, and the pursuit of having a three day weekend so they could hit up a few car dealerships and furniture stores for the BEST PRESIDENTIAL SALE EVER!!
So, many holidays, no matter how sentimental, have pointless traditions. Like Father’s Day. A great day to enjoy dads, but the selection of Father’s Day greeting cards is HORRENDOUS. Like the infamous golf cards. Some people are in to golf, and I respect that. But does every single father have to be? (“Congratulations, Jim, you are a father of twins. Here are directions to my favorite golf course.”) Not to mention the messages are lame.

Hey, Dad! A little BIRDIE told me to keep an EAGLE’s eye out for a special card just FORE you!

Thanks for being a great Mr. Fix-it!

What of your dad is more of a Mr. Break-it?

But they also have fishing cards, if your father doesn’t fix things or play golf.

You’re a REEL great dad, and that isn’t deBAITable. I’d even say you’re a KEEPER!

So, I make my own cards. But, if you don’t like these traditions you can resolve to: 1. Make fun of Groundhog Day. 2. Not buy ANYTHING on President’s day. 3. Get your dad a normal card. Even if he does like to fish. 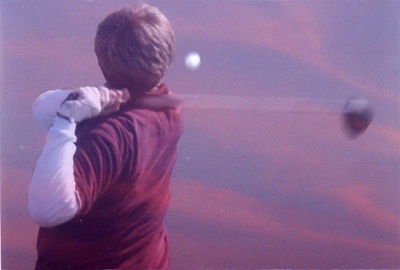 The author's comments:
Who sticks to resolutions, anyway? Even I sometimes forget to make fun of Groundhog Day.
Post a comment
Submit your own