The Season of the Swarm | Teen Ink

The Season of the Swarm

The thermometer timidly glanced at the voluptuous and radiant sun, and flushed a deep crimson. Beads of sweat awoke like prairie dogs from hibernation, popped from their pores, and darted merrily down four scarlet faces. Water sprang from the pool and danced in the air as eight hands slapped down and eight legs kicked out and four mouths laughed and spluttered and gasped. Johnny exploded from the diving board like a bottle cap and the pool erupted like shaken soda. Greg urged his tiny brother Robert into the cool green water like Columbus must have urged the Spanish to believe the world was round. Greg's friend pretended he was a dolphin and dived and surfaced and gasped in the middle of the pool. The lifeguard, at 16 years of age, poured over his summer reading, not expecting that in seconds the apple would be eaten and Elysium would fall.

Tears began to leak from Robert's eyes, then crying erupted from his mouth, then he was inconsolable. The life guard sat up. Robert's head bobbed just above the water. Robert breathed. Robert had his older brother. Robert would be fine. The life guard plunged his nose back in his book.

“The bee, the bee, Robert's afraid of the bee!” yelled out Greg pointing frantically. The lifegaurd sat up. A tiny dot marred the otherwise bleached concrete edge of the pool. The dot moved. Robert screamed.

“Don't you see the bee! The bee! Little Robert's afraid of the bee! Help him! Get rid of the bee!”, the lifeguard’s mother pressed her face against the window and cried out instructions like a sports coach in the fourth quarter. The iota that was the bee flexed its wings. Robert frantically thrashed away. Robert's mother arrived like an ambulance, threw open the gate to the pool, and snatched up Robert like the park service rescues desperate climbers precariously hanging thousands of feet in the air from the unforgiving sides of the Devil's Tower. The speck inched toward the pool. The mother stumbled back, and smiled like a nurse treating a terminally ill tuberculosis patient, calm to keep out chaos, but fully knowledgeable of the impending disaster. Since help had arrived, Greg abandoned his brother and dove for cover under the water like a U.S sub darting from the sonar of a Soviet battleship. Johnny bursting from the water for a breathe assessed the situation as quickly as J.F Kennedy absorbed the fact that the soviets armed Cuba with missiles. Unlike J.F Kennedy, he clucked in terror and doggy paddled to the far side of the pool crying out, “Get away from the Bee!”

The lifeguard - realizing just as many light house operators have when they neglect to light the beacon and cause the grounding of a galleon and the death of all aboard; that he had betrayed his post - he stood firmly from his seat and strode toward the black period on the sidewalk that was the bee. Valiantly he put forward his foot and desperately attempted to send the bee on its way. Robert's mother knew better and cautioned him with thinly veiled panic, “Won't it sting you!”

Johnny had quit the pool, and cried out to his comrades that, “It's no longer playing in the pool, it's now running away from bees.”

Robert claimed a swarm of bees had invaded the pool, and his mother grimly confirmed the terrible truth. From the window, the lifeguard's mother moaned out that the intense heat had probably herded the bees to the pool in search of water. “They're like us,” she pleaded, “they're just thirsty.

Robert's mother holding Gregory fumbled with the safety lock on the gate, flung it open, and hurried the boys out of the pool area. With a bang, the lifeguard found himself alone in the pool area.

The water lapped contentedly at the edges of the pool. The pool toys relaxed and tanned themselves in the sun. The stacked towels meditated on the reclining chair. The Lifeguard's summer reading breathed a sigh of relief and floated off the table on the wind and descended into the flowerbed. Even the usually flustered and short tempered water pistol stretched out on the concrete and dozed off. The lifeguard stared at the bee. The bee didn't bother staring back. He kicked it with a flip flop. The bee buzzed around a little and then landed lethargically but defiantly on the same smack of concrete. He left the pool area and when the gate gently clicked behind him, no one else dared tread beyond that fence. It was of course, the season of the swarm. 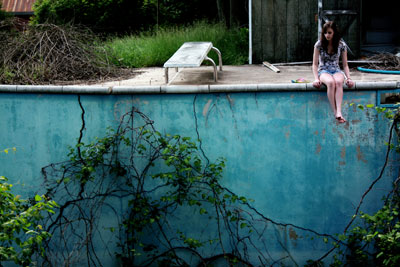 Favorite Quote:
"The only way to find true happiness is to risk being completely cut open. Sure, everybody wants to play God, but for me it's a full-time job. What you don't understand, you can make mean anything." Jeferree Star