All my life I have had a fascination with Greek mythology. When I was four, I named my cats Zeus and Apollo, and later when I was in the second grade my teacher, Mrs. Savedes, was from Greece and spending time with her fostered my interest in Greek mythology. As I have grown older my love of Greece and its culture has flourished. Greek mythology has continued to be the one subject that I know inside and out, and so it has been my dream to go to Athens, Greece and to visit the Parthenon, the home of Athena. This past July my dream came true, and we visited Greece while on a Mediterranean cruise, and I have to say that it was truly the highlight of my summer. What was my favorite memento from the trip? It wasn't my pendant of the goddess Athena, my painting of Athens, or even my Athenian owl figurine. My special memento is a picture of me sitting up high on the Acropolis perched on a rock, gazing upon the Parthenon. It may seem strange that a simple picture represents the highlight of my trip, but the Parthenon holds a special meaning for me. It is the temple of Athena, the goddess of wisdom, and the goddess that I hold the most knowledge and respect for, whether she actually exists or not.

The picture depicts me sitting on a slab of marble rock with my chin resting on top of my knees, gazing in awe at the Parthenon with all of Athens in the background. As I looked at the Parthenon, I remember feeling at peace, as if I had reached the climax of my Grecian spiritual journey. The air was crisp and clear, free of the pollution of American cities and I could almost smell the perpetual Greek flame burning. This photograph is special to me because it symbolizes my journey from childhood coming full circle into adolescence. Ever since I was little, I have loved Greek culture, and it was always my dream to visit Greece and to stand in the place where Athenians honored Athena and Poseidon.

To walk the hallowed grounds with its inspiring architecture and to immerse myself in the mystery and legend of Greek mythology was the experience of a lifetime. I could feel the power of Zeus, the wisdom of Athena and the anger of Poseidon! As I closed my eyes I could almost envision the Grecian fables being acted out in front of me and I was transported back to that magical time. That photograph meant that I had accomplished part of my bucket list. It meant that I had lived out one of my dreams. Some children dream to be an astronaut; I aspired to journey to Greece, and last summer I finally got the chance to travel there. I love Greece, and I cannot wait to travel there again someday, and to share my love of Greek mythology as well as its wonderful culture with my family and my children. 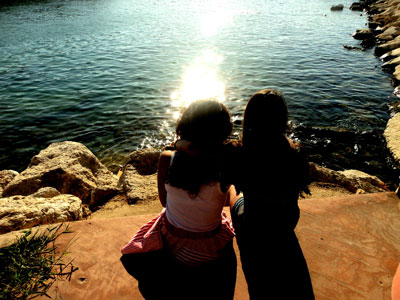