My brother and I were in a vast stone cavern. The stone was grey and rough, and the cavern stretched on as far as the eye could see and then kept going into eternal blackness. We were standing on a type of stone bridge, really just a thin thread of stone stretching from one end of the cavern to the other, with no support between it and the spiked floor several miles below. Jeremiah and I inched down the bridge slowly on dirty bare feet, our steps echoing deeply on the cold stone. I was scared; I could hear my heart beating in my ears. I didn’t know why I was scared, but I had an impending feeling of doom. My brother looked worried, like he was secretly scared but wasn’t letting it show. We crept along slowly, looking around nervously. Jeremiah stopped, almost as if he had heard something. He walked to the very edge of the bridge and strained as if listening for something, a sound to confirm what he feared he had heard. He suddenly yelled “RUN,” turned back to me and grabbed my hand. He took off running, dragging me along with him. As I stumbled along behind him, all I could think of was his face. He looked more terrified than I had ever seen him, and I hadn’t seen Jeremiah truly scared of anything before. I heard something, like a loud beating of a very large pair of wings. As it echoed through the cavern, the sound filled me with fear. I didn’t know why I was afraid, and I didn’t know why we were running. We ran along, and I could swear that we were being chased. When I looked back, though, I didn’t see anything. Jeremiah pulled harder when I looked behind us, because I couldn’t run as fast. It was hard to breathe, both because I wasn’t used to running that much, and because the cool cavern air had changed. Before it had been cool and smelled musky, like the air didn’t move much. Now, however, a dry heat filled the atmosphere.
The view then shifted. I suddenly saw my brother and me running, like I was running backwards in front of the two of us. The view spiraled out and up, almost as if I were climbing a large spiral staircase. The center of my view was always my brother and I. In two seconds, all I could see of Jeremiah and I was our black silhouettes. We moved as if we were running, but we didn’t appear to be getting anywhere. Somehow, light was where we were, almost as if we had a very powerful lantern with us; nowhere else in the cavern was lit up, though. With a flash, I was back in my body. The beating wings sounded closer and closer, and Jeremiah skidded to a halt at the side of the bridge, stopping me as well. We were practically on the very edge; one misstep and we’d fall all the way down. I wasn’t usually afraid of heights, but as I looked down into nothingness, my heart leapt into my throat. At the instant we stopped, a gigantic red dragon lunged up, right in front of us. She was a brilliant scarlet, with scales the size of softballs. Her underbelly was an orange-gold color, and heat radiated from her like light from the sun. All I could see of her was her head and occasionally her wings on the upbeat. She studied us for a few seconds; they were some of the most horrible seconds of my life. Her eyes were dark, like smoldering coals. With each flap of her wings, she rose higher, until she was staring at us from up high. It seemed as if she were still right in front of us, studying us, finding our flaws. If I had been able to take my eyes off her face, I would’ve seen that her hands – great, curved like a bats, and with massive claws – were about eye level with me. About five seconds after she had first appeared, she suddenly reared back and then lunged towards us. Her face was again right in front of my brother and me, but she had no hesitation this time. She opened her mouth, with malice and hatred in her eyes, and from her mouth a volcano of flame erupted. Reds and yellows swirled together with power and searing heat. They raced towards my brother, completely engulfing him. There was no time for him to react; he disappeared into the flames, and all I could do was scream.
This was my first nightmare. 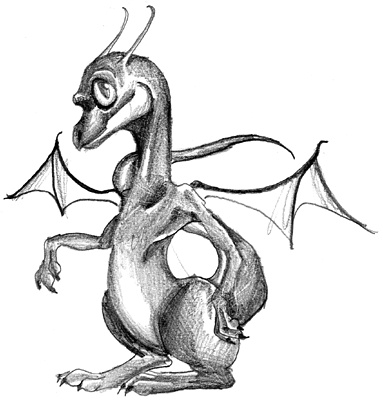 The author's comments:
This is a recap of my first nightmare. I wrote this for part of a paper in English and wanted more feedback on it. thanks :)
Post a comment
Submit your own