She had given up trying to write stories; her inability to even tell one had frightened away even her most far-fetched of hopes. Her own story consisted of monotony. He was her plot; he was her heart; he made her happy, and then that was the end. Outside of that shallow framework, she contented herself with solitude and sleep deprivation. She spent her life counting seconds, minutes, hours of wasted time. She had been born a dreamer with two left feet and too much caution to pursue her own dreams. She used to dare to believe herself to be a poet; filled notebook after filled notebook is tucked away in her drawer to prove it. She envied the prose of others, the poetry of life, every piece she could never be creative enough to write. She filled her shelves with half-read classics, pretentiousness at its finest. She admired Hemingway, Nabokov, Vonnegut, but read nothing or no one religiously. Ironically, her deepest fear was not that she was incapable of making a difference but that she would forever be too afraid to try. She was ambitious but without reason and she without reason once she had fallen in love. (However, she would have never changed the existence of that love for all the world.) He was her every waking and slumbering thought, her beginning and her end, her every muse and very writer's block. She had written in times of adversity; she had written in times of desperation; nevertheless, she found herself incapable of writing in times encompassed by the selflessness of love.

She perceived art to be a reflection of one's own self or perceptions of the world around them. However, he was her entire world, altogether far too familiar to invent and yet far too mysterious to define. He was the dim outline of a dream she couldn't recall, the scent of nostalgia she couldn't place, the familiar face she could have only known in another life. He was the everything of which she could say nothing. A speechless poet is of no value to their audience; she was a poet without even an audience to please. Her father had once called her a brick-layer. She could not move from one sentence to the next without first cementing each and every word unrelentingly into its place. She was not a river, as the best of writers were. She was not a writer, as the most unabashed of dreamers are. She was a failed poet, a feigned intellectual, the uncensored rush of air from a depleting balloon- pure energy- without direction and inevitably lacking endurance. Perhaps these realities were what kept her from writing her story. Perhaps it was her pursuit of appearing to be an artist that prevented her from actually becoming one. She looked to answer questions of inspiration amidst happiness, after all, shouldn't inspiration spill over in such times, overwhelmingly, uncontrollably, and without end? Additionally, where did inspiration come from anyway, within or without one's own mind? But, surprisingly, the one question she wanted most to ask herself was, if every second not spent moving forward was one more she counted as wasted, why she did not waste one more moment hopelessly trying again? 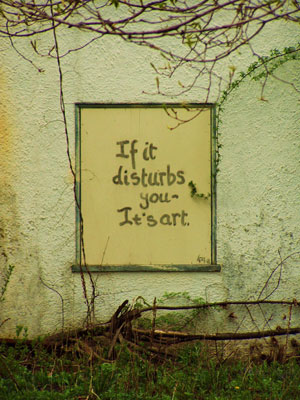 The author's comments:
I write my journals in third person sometimes.
Post a comment
Submit your own