As a child, I always heard the words “coyote,” “immigrant,”
“immigration,” and “ICE” get thrown around in family conversations. I never really knew what they meant, but as I got older, I started to pick up on the meaning of these words.
I first learned what “coyote” meant when my dad got deported and my brother started talking to me about a coyote who was going to bring my dad back. He explained to me that he wasn’t referring to the animal, but a person whose job it was to bring illegal immigrants into the country.


When I learned about the word “immigrants,” it was not in the context of Mexicans or Hispanics – but Jewish people, and how they were a group of people that went from one country to another in pursuit of a better life. The word immigration was thrown around a lot between my parents, but they tried to shelter me from that part of our lives and what that word meant. After awhile I was old enough to piece things together; also, the internet was now at my fingertips. I learned that the word immigration was my parents’ way of saying ICE. I eventually realized that my family are illegal immigrants, and I too lived a couple of years of my life believing that I was also an immigrant.


I saw my brother struggling to pay his college classes, but in school, I learned about something called financial aid. I asked him,  “Don’t you have financial aid?” His face turned into a volcano, steam blowing out from his ears and his face spewing hot red lava. He yelled at me to get out of his face.

Later that night, my mom explained to me that he doesn’t have financial aid because he’s undocumented, and undocumented students cannot apply for financial aid. I asked her if I too would have to worry about paying for college. She explained that I wouldn’t have to worry so much since I was an American citizen. American citizen – those two words rung in my head as if they were gongs, loud and gold, like a golden ticket to anywhere I desired to go. That night I asked my mom, “Is that why my brother doesn’t like me?” At the time it was a simple question that I thought had a simple response. My mom never answered the question. She ended the conversation, telling me to go to sleep. All I could think about that night was the fact that I was an American citizen.


For my first seven years, I lived life without an identity or a label. At eight, I labeled myself an illegal immigrant as if it was nothing more than a common name tag. “Hi! My name is … I’m an illegal immigrant.” But when I was 10, my mother rubbed off those words and wrote “American Citizen.”


I saw all the opportunities that only I had in my family. I saw the great things that these opportunities could enable me to do: apply for financial aid, go to college, study abroad, travel back and forth over borders without having to worry about returning to the United States. These privileges became even more important to me when I entered high school and teachers started pushing college on us. I think back to my brother and my parents’ struggles with more understanding now. I know I’m lucky when the word “college” rings in my head just like the words “American citizen” rang when I was ten. 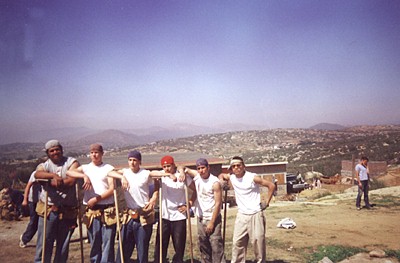