Favorite Quote:
"I take my champagne pink and my love with reckless abandon."

Rule #1 of being a teenager: Everything is more exciting if you're not allowed to do it. Phoebe and I didn't sneak out to meet boys or do anything against the law; we had no dishonorable intentions that could only be carried out at night. It's just that being able to walk and talk and dance and yell when everyone else is asleep is the most wonderful feeling in the world, or possibly the universe.
At the end of the summer before ninth grade, I spent a week with my friend Phoebe in Virginia. She lives on a back road where there are more chickens than people, and the only lights you can see at night are the fireflies. When I was visiting her we got hit with a heat wave, and her room was the only one in the house without an air conditioner. We would lie awake late at night listening to the air conditioner units wheezing throughout the rest of the house. It was a blessed opportunity: we were awake when everyone else was not only asleep but deafened by the sound of their fans.
Phoebe and I crept down the stairs, treading lightly in the old house that groaned at the slightest touch. But when we made it out the front door, we were running faster than the devil, our bare feet slapping against the hot pavement. Most of the time we would go into the field that belonged to her closest neighbor, and lie side by side across hay bales, or climb a tree and watch the cars whiz past far out on Route 29. We always returned by sunrise, because not long after dawn her mom would wake up to make her morning coffee. She probably wondered why we slept 'til noon and why our legs and arms were covered in bites and scratches; we looked like we had been dragged through a bramble patch. But she never mentioned it. In retrospect I think maybe she didn't want to ruin our fun.
One night, instead of going to the field, we came up with a new plan. This time when we got out the screen door, we slipped into our flip flops and went in the opposite direction – ­toward civilization. Civilization – ­otherwise known as the 7-Eleven a mile and a half away, right on the corner of someplace and the middle of nowhere. It wasn't much to look at during the day, with weeds coming up through the painted cinder blocks, and the woman who rang you up had to redo the total because her fake nails always got in the way. But the neon sign flickering in the window over
the donut display, and the buzz of ­refrigerators, and the smells of stale cigarettes and trans fats when you pulled open the door, were full of mystery and potential in the calm of night time.
Phoebe and I browsed the aisles of energy drinks and ­energy bars and pork rinds. Eventually we bought a dozen donut holes and a liter of root beer, and the woman who rang us up hit all the right buttons even though her perm covered most of her face and you could make shish kebabs on her stick-on nails. Before leaving we glanced, only a little nervously, at the trucker stopping for a smoke on the bench outside, but when his cigarette flared bright he just smiled ­absentmindedly at us in its ­orange glow.
On my last night at her house, we only made it halfway down the stairs when we got caught. Our heartbeats quickened and our palms sweated. It was like the moment before you die when your life flashes before your eyes. I could see it all. My parents were going to find out, I was going to be grounded for so long I would be forgotten and become a social recluse who develops a severe alcohol problem and drops out of school. I would live in my parents' basement until I died in a meth lab explosion at age forty-five. In my will, I would leave my entire worth of $13.57, mostly in dimes, to my hairless cat, Mr. ­Fluffington.
But when I turned around on the stairs, it was Phoebe's older brother. He put a finger to his lips and then went down the hall ahead of us, out the door, and got in his truck. Phoebe sat shotgun and I got in the bed, and he rolled quietly down the driveway, cringing at every squeak of the tires.
When we hit the road, we went fast, the wind whipping my hair round my head and whistling through my fingers. I spread my arms out, and Phoebe leaned way out the window, and for hours we just let the sleepy world whip past. 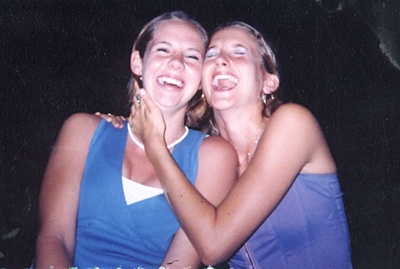 View profile
Hi! I'm the teacher's assistant in a creative writing class. We were going through the magazine and a few of the students found this peice. Just to lighten your day a little, I thought I would let you know what they had to say. Good details, interesting, relate to it, and absolutely consuming. Have a good day! I hope to see more peices like this.