For those unfamiliar with the New York Times bestselling Warriors and Seekers sagas, these epic series by Erin Hunter currently consists of twenty six books total, not to mention six from their equally successful Seekers series and eleven manga. (So far) It may seem like way too much writing for one author, but Erin can easily handle it for a simple reason; she is actually four people! Two of the amazing animal fantasy authors answered some questions for some fans.
Kate Cary – Wrote the very first Warrior book, Into the Wild, and will be writing the final book, still untitled.
Victoria – Creates ideas and plotlines for the series, including manga’s and Seekers.

Question: If you weren’t writing, which career would interest you most?

Kate: I would LOVE to be a librarian - all those books!! :) (It's organizing and cataloguing them that appeals to me rather than reading them, which is odd because if you saw my messy house and cluttered PC you wouldn't think I enjoyed organizing anything.)

Victoria: Working with horses and dogs when the sun is shining; baking wedding cakes and brownies when it's raining!

Q: What inspires you to write? Are all authors inspired by this?

K: Other people's creativity inspires me. Seeing great art, or reading a fab book or watching an interesting documentary or an exciting film – these things make me want to let my own imagination fly. I can't answer for other writers.

V: I can't speak for all authors but I get inspired by the teeniest, tiniest idea for a story, which I know I can grow in my imagination.

Q: Who had the greatest influence on your career? (Family, friends, writers, etc.)

K: Can I tell you when I've finished my career because I can't really tell from inside it?

V: My ex-boyfriend Joe who told me to apply for the job that I wanted to have in five years' time, then find out what I needed to achieve it. I got the job! It was as an editor, and from there I started working on Warriors.

Q: Many young writers are dying to know ­ how do you get published? Is it extremely difficult?

K: It depends how you approach it. If you want to write a book that's very successful and famous, then it's hard. If you just want to get published, all you have to do is convince an editor that your idea will make them money. The most helpful book you can read about how to get published is by Nancy I Sanders http://www.nancyisanders.com/writerzone.html - I didn't read it till after I'd been published, but it's a brilliantly practical down-to-earth guide to getting published.

V: It can be very difficult because there are a LOT of books out there, and the shelves are getting kind of crowded! You just have to write the best possible manuscript, send it to as many agents and publishers as you can, and be prepared to make any changes that editors ask for. Be charming, humble and aware that if you do get published, you're very, very lucky!

Q: Will you be publishing any more novels on your own, outside of Warriors?

K: I've written a couple of vampire novels under my own name - Bloodline and
The Reckoning - and I'm hoping to follow them up with a delicious gothic romance next year (fingers crossed). I'm also currently working on a series of pre-teen chick-lit which is great fun but will be published under another name.

V: Yes, I have several ideas but right now Warriors and Seekers take up all of my time.

Q: When did you decide you wanted to be a writer? Was it a simple decision?

K: When I was 4, and then again when I was at University. It was very simple. I wanted a career I could work on from home because the Grown-Up World seemed very scary at the time. (It's seems less scary now I'm one of the grown-ups)

V: I was always good at writing stories when I was at school but I never imagined I could earn my living as a writer. I worked as a high school teacher first. When I became an editor, the opportunity to write came up, and I grabbed it - with lots of encouragement from my ex-boyfriend Joe, mentioned above.

Q: How do you develop characters and plots?

K: I work on plot first. I sit down with a simple idea and then flesh it out with events and characters that eventually take on lives of their own and develop themselves - it sounds unbelievable, but you should try it. Just sit down with a pen and paper and an idea and start writing it out. You'll be amazed where it leads.

V: I try to think of things which haven't been done before, and of characters that will be fun to write, whether they're "good" or "bad".

Q: Out of all of your books, do you have a personal favorite?

K: Bluestar's Prophecy. I loved writing the sad bits. It was very indulgent.

V: Bluestar's Prophecy, then The Darkest Hour. Of books that I wrote alone, Code of the Clans.

Q: What other novels do you recommend for readers ages 13-18?

K: The Knife of Never Letting Go by Patrick Ness is WONDERFUL. As a teen I read everything in the teen section of the local library. "I Am David" sticks in my mind and I used to love the Pennington books by K M Peyton and anything by Paul Zindel.

Q: Is writer’s block ever a problem for you? If so, how do you handle it? If not, how would you?

K: It is. Though I'm not sure exactly what writer's block means. But there are times when I just can't bring myself to sit down and write and I'm never sure whether it's pure laziness or lack of courage - there's always the thought in the back of my mind that my writing won't be good enough.

V: All the time! I do something completely different, like taking the dog for a walk or doing housework. Then I switch computers, from my Mac to my laptop in the sitting-room. And then I switch to pen and paper, which usually gets my creative juices flowing again.

Q: Was there ever a time you felt like giving up writing?

K: Never. I only ever want to get better at it.

V: Oh yes, whenever I can't think of any new ways to kill cats!

Q: How do you come up with ideas? Is there a certain time, place, or setting that is best for you to come up with new plots?

K: I keep a notebook with me and jot down ideas that spring into my head or that are inspired by something I hear on the radio or read or see on the TV.

V: I just haul them out of my dark and twisted imagination! Ideas occur to me at any time, but most often when I'm walking in the countryside. Also in the shower - I should really keep a waterproof pen and paper in there!

Q: What is the best part of being an author? (Creating ideas, writing, talking to fans)

K: Working from home - no commute, no timetables, no co-workers :)

V: Being able to make a living out of creating stories, and also meeting the fans.

Q: What are the prerequisites of becoming a writer? Can just anyone get published?

K: All you need is good enough spelling and grammar to convince an editor to read past the first paragraph (editors really hate bad spelling and grammar. It's like turning up for a modeling job without brushing your hair.) If you can do that then there's nothing to stop anyone with a great story getting published.

V: You have to be able to write!

Q: Have you ever written anything other than stories, such as poetry or newspaper articles?

V: Yes, I've written plays, poems and some articles for newspapers. Novels are my favorite medium, though.

V: There's a RiverClan Super Edition coming out this year called Crookedstar's Promise, and a ShadowClan Super Edition next year, yippee! Also more Seekers books with the launch of the second series. And always more manga!

If you were a Warrior’s character, which clan would you most likely join?

K: RiverClan. They're never hungry and they get to swim - I love swimming.

V: RiverClan, because I love swimming and I'd like thick, glossy fur.

Q: The final Omen of the Star’s book is slowly approaching! Do the Erin’s plan on continuing the series?

V: There will be a fifth series, but this will be set back when the Clans first came to the original forest so it will feature all new cats!

Q: How involved are you with the Seeker’s series, Erin¹s bear series?

K: Not at all at the moment. I haven't time.

V: Completely involved! The books are based on my ideas, and I create the storylines for each one, just as I do with Warriors.

Q: It sounds difficult for you and the other Erin¹s to communicate when you hardly ever see each other! What is the process of writing like with four authors? How different is it than writing solo?

K: We don't need to communicate really. Vicky is the hub and she sends us all the information we need to write an Erin Hunter title - plotline, notes, cast lists. Each installment is a little tiny word of its own; keeping it linked with the main arc is easy so long as we simply read each other's titles as we go along.

V: It's very easy, really, thanks to email and phones! Plus my Erins are very obedient and write exactly what I tell them to. :) Seriously, I love working in a team, there's always someone to bounce ideas off, so it's much less lonely than working alone. 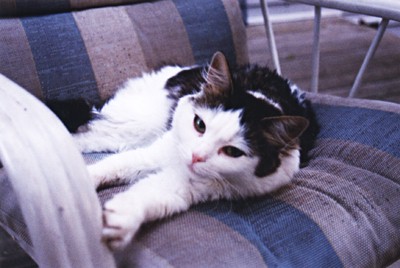 The author's comments:
I started reading Warriors when I was ten. Now, four years later, Erin is still my favorite author. I was amazed how much I learned about her from one online interview, I decided to try one myself.
Post a comment
Submit your own

Favorite Quote:
To die may be an awfully big adventure, but to love is an even grander affair -myself