The evening of December 8, 1980, John Lennon, beloved singer, songwriter, and political activist, was shot and killed in front of his apartment building in New York City. He was only 40. Lennon is a hero to me. Even though he was not alive during my generation, his influence lives on through his music and messages of peace.

John Lennon was born in England on October 9, 1940, during World War II. After his father left, his mother gave him to his aunt and uncle. In school, he was miserable. He was extremely intelligent but hated the conformity and his teachers. Later on, Lennon attended the Liverpool College of Art but dropped out for the same reasons. In art school, he met Cynthia Powell, who became his wife, and they had a son, Julian. It was during this time that Lennon devoted his life to music after hearing American rock ’n’ roll greats Elvis and Buddy Holly. He started a band with Paul McCartney and George Harrison called the Quarrymen, which later became The Beatles.

During the early years, the band played small gigs in bars and clubs. It was on a trip to Hamburg, Germany, that they started gaining fame. They replaced their original drummer with Richard Starkey, a.k.a. Ringo Starr, and released their first album, “Please, Please Me,” in 1963. Beatlemania had begun.

The band began touring England and America, and was constantly pursued by fans. Over the next seven years, The Beatles would release 13 albums. Lennon and McCartney’s songwriting partnership became legendary. During the later years, Lennon increasingly used psychedelic drugs and was in and out of rehab. He also met the love of his life, Yoko Ono, and Cynthia divorced him. By this time the band was falling apart and Lennon and McCartney were disagreeing about everything.

By 1970, The Beatles were finished and Lennon moved to New York. In 1971, he released the solo album “Imagine” to much acclaim. The next year brought the extremely political album “Sometime in New York City,” which addresses racial issues and denounces chauvinism. Lennon by now was steeped in left-wing politics, going as far as giving donations to Trotskyist parties.

Lennon transformed into an antiwar activist during the Vietnam War with the song “Give Peace a Chance.” His inspiration came from Bob Dylan, another singer and war protester. In 1972, Lennon toured the U.S. to influence youth to vote against the war, against Richard Nixon. The Nixon Administration found out and tried to deport him.

Other examples of his antiwar efforts were the “bed-ins for peace,” where Lennon and Ono would stay in bed shrouded in white promoting peace with signs reading “Bed Peace” and “Hair Peace.” Lennon and Ono also wore white bags over their bodies, satirizing prejudice and stereotypes. They funded billboards all over America denouncing war.

On December 8, 1980, Mark David Chapman stood in the shadows near
the entrance to Lennon’s apartment building. Lennon and Ono were returning from a recording session, and as they approached the gate, Chapman shot him four times in the chest. The police arrested Chapman, who did not resist, and rushed Lennon to the hospital, where he was pronounced dead. This news shocked the world. Thousands of fans camped outside his building and paid tribute by playing his songs.

John Lennon is my hero for many reasons. He took action against war and racism, and denounced oppression and violence. He fought for many things I believe in. I am also a huge fan of his music. His lyrics are meaningful and heartfelt, not shallow and repetitive like much of today’s music. He wrote music for the world, not for money. John Lennon has inspired me to speak up for what I believe in. He is also an artistic inspiration. If he were still alive, I think the world would be a better place. 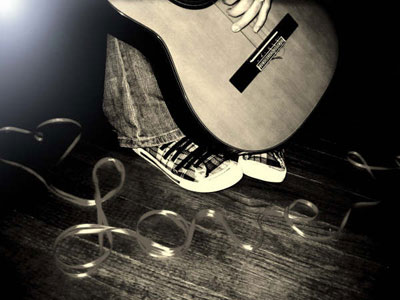 This article has 38 comments.

Favorite Quote:
“Promise me you'll never forget me because if I thought you would I'd never leave.” Winnie The Pooh

View profile
I looooovvvveee John Lennon!!  I had a teacher who played his music everyday when we would walk into class.  His music is beautiful and I love it!  I wish there could be an artist like him today.
_NoAir_ BRONZE said...
on Apr. 4 2010 at 7:40 pm
_NoAir_ BRONZE, Toronto, Other
4 articles 1 photo 463 comments

Favorite Quote:
There are as many ways to live as there are people in this world. Each one deserves a closer look.

Favorite Quote:
And at that moment, I swear we were infinite.

View profile
Great article, man. I think John Lennon is the greatest musician this world has ever seen. Period. You got it totally write when you wrote this piece. His music definetly is better than today's pop, and his lyrics had so much more depth and meaning to them. Awesome work.
DeadlyPoppy PLATINUM said...
on Mar. 13 2010 at 9:07 pm
DeadlyPoppy PLATINUM, Chehalis, Washington
30 articles 13 photos 41 comments

Favorite Quote:
Do not pity the dead, Harry. Pity the living, and above all, pity those who live without love -Albus Dumbledore

View profile
I LOVE the Beatles, and have loved the Beatles practically my whole life. I agree, Chapman was completley stupid when he shot John. I also miss George, because he was also pretty outspoken. Didn't he write Taxman? I haven't really listened to John's work after the Beatles broke up because I'm more of a Paul McCartney fan by like one percent, but I used his song All You Need is Love in a speech I gave in school, trying to tell people that all they need to do is love and accept people for who they are, etc. This world would have been a better place with John here. Wish they hadn't done drugs though.. :(. ALL YOU NEED IS LOVE!!
PaulMcCarntey44 BRONZE said...
on Feb. 19 2010 at 5:36 pm
PaulMcCarntey44 BRONZE, Sagamore Beach, Massachusetts
1 article 0 photos 4 comments

Favorite Quote:
I get by with a little help from my friends- Ringo Starr, They gonna put me in the movies- Ringo Starr and Its been a hard days night- Ringo Starr

View profile
As u can probly see im a big beatles fan and john is one of my heros. Some more facts~

*MDC shot john four times in the back not chest and then he hung around AFTER he shot him thinking he was not going to get arrested.

And at the moment imgaine is a song thats stuck in my head and i know it bye heart some days it makes me cry thats how touching it is but any way GREAT job
Amber_Dawg24 said...
on Feb. 2 2010 at 9:55 pm
haha, obviously.

View profile
This was really nice, but I think you could have written more about his activism, and that Nixon tried to deport him because John was hurting his campaign. John is my hero, too, he was great.. stupid Chapman. The world would be a better place if he was still alive.

Favorite Quote:
"It's funny. Don't ever tell anybody anything. If you do, you start missing everybody." The Catcher in the Rye

View profile
He was born in Liverpool!!!!!!! His middle name is Winston!!!! He changed his name to John Winston Ono Lennon!!!!! "Imagine" is the best song ever!!!!
loveandmusic SILVER said...
on Jan. 28 2010 at 1:54 pm
loveandmusic SILVER, South Plainfield, New Jersey
9 articles 0 photos 8 comments

Favorite Quote:
"If everyone demanded peace instead of a new television set, then there'd be peace." - John Lennon

View profile
YOU ARE MY SOUL MATE. Hahaha, just kidding. But seriously, John Lennon is my hero, without a doubt. His music, his lack of conformity, just the way he was...he was so cool and I wear black each December 8 in honor of him. This made me think of my hero and was a really well-written article as well.

Favorite Quote:
Life is what happens when you're busy making other plans. - John Lennon

1) He did not form the Quarrymen with George and Paul, but with friends. Paul and George came along later.

2) *He* divorced Cynthia on the grounds that she was having an affair, though that was simply an excuse(he was really awful to her during most of their relationship).

Have you read "John Lennon: The Life", by the way? It's great, if you can take 800 pages all about Lennon.

3)
SloopyMcCoy said...
on Jan. 30 2009 at 10:39 pm
AMAZING!!!! Yup John Lennon's my hero too. Heh I have a funny story my friend and I were listening to my ipod and imagine came on and my friend says "IMAGINE!" and my other friend who wasn't listening says "so is John lennon your idol or something?" and I'm like YUP!!!! Your article is AMAZING!!!