Lucky and I | Teen Ink

It all started two years ago in the summer at my favorite place in the whole entire world. The horse farm.

One morning 6am sharp, I went out to feed the horses,clean the pens, and muck out stalls, when i saw this big fat tabby cat just walking around outside like he owned the place. "Who is this cat"? i would say to myself, i already had to cats Trouble and Shawdow.

Here kitty kitty I purred to the cat not wanting it to runaway as if I was a dog.

He looked at me and gave me a little kitty grin and came over and rubbed agaisnt my leg and he left just like that.

I examined him making sure everything looked good. Well his fat i thought so maybe he isent a stray just an outside cat.

I went back to do my job, yuck i said after my third stall when i watched to wheelbarrel fall over. I sighed and muttered to myself I guess this also stall four then.

After a fed the horses and brought my horse Dreamer in for her grooming I went out to the barn to see one of the boarders petting the cat. (If you dont speak horse a boarder is a person who pays to have there horse at a barn/stable)

"He looks cute doesn't he I asked"?

"Oh yes he does i wish i could bring him home" She replied.

"Okay" she smiled a warm smile at me, "You were always an animal lover"

I smiled at her and walk toward my grandmas big house its very rustic looking it has windchimes and her house is made of wood. Its the deep color of bark on an oak tree.

I ran up the stairs to at a time like I always do and bursted threw the door and smelled lavender candles burning, and i saw her curled up on the couch reading a "Cowboys and Indians" magazine with her dog Dolly right next to her.

"Hey Grandma" i said with a sweet smile on my face.

"Oh hey Melly had a slow morining? Its nearly 9am and just getting in"

I laughed "I had some distractions" I said in a laughing tone. I looked outside and there was the cat again wandering around all by himself and i felt a pang in my heart of wanting to bring him in then I heard my grandma taking to me but i missed part of it.


"Oh umm" I said that while feeling like a complete and utter idiot. "Well theres this Orange Tabby cat outside just hanging around hes really friendly".


"Oh him"? "I saw someone drop off a box with two cats down the drive he must be one of them i think theres one other. Such i shame! People should just bring them to the "Human Socity".


By this time i was biting down on my lip feeling even worse for the cat as i stared at him threw the glass.

Then all of a sudden i heard the door boom open and my sister screaming not litteraly but it sure sounded like it.

She sounded like a herd of elephants walking up the stairs, and when she got to where we were she looked at the window at the cat.

"Well whos that"? She said in her typical stoner voice.

" An abandon cat" I said right away before she even finished her sentence. And before i could finish mine she was already running down the stairs and walking swiftly toward the cat who was now licking away at his paws like a lollipop.

I stayed in and watched her as she picked up the cat and started to nuzzle behide his ears I was imagening what his purr sounded like "Probably loud and adorable something you would want to hear all the time" little did i know i had a huge grin on my face.

A couple days past, and the cat had been following me where ever i go in the stalls even! I thought cats didnt like to get dirty! Apprently this cat proved me wrong.

I would pet him between tasks as he followed right behide me it was like i was a mother goose and he was duckling.

To show affection back to me he put his front paws on my forehead when i picked him up or licked my cheek. I loved the sandpapery feeling of his tounge it has always felt like a sercurity blanket didn't matter what cat was doing it.

After i was done with all my tasks i would put him in the tack room and gave him food and water so he wouldnt get hit by a car or anything.

My mom came and got me a couple days later. She was always a sucker for cats, always fell for them, so i took her to the barn with my grandma and I.

"Hey mom check this cat out"! i said enthusiasticly.

"Uh huh"! I smiled at her. Then i raced to the tack room. "Hey buddy" i said "try to look as cute as possibly" and in the second i swear he listened.
I walked up with saftly in my arms and i saw my mom reaction and she had a huge smile plastered on her face, I couldnt help but smile either.

I gave him to her and the second her manicured nails touch his soft fur he began to purr he purred louder than i have ever heard him before snuggleing up against her. "Thanks" i said softly in my head, as I watched my mother looking down at him.

"His name is Lucky!" She said proudly just like she won a gold medal in olypics.

"Melanie do want this cat"?

"Then his name is Lucky"


"So i can keep him"?! A huge smile spread across my face.

"Yes he can honey"

By this time i was jumping up and down like a dog when someone put a bone in his face and squealing like pig.

We brought him home and he slepted with me that night just like every night that i would soon find out.

I was Lucky's favoite I'm the only person he sleeps with or cuddles with which makes me feel special. My mother can never make him purr anymore just that one time. But thats all we needed. Every morning when i wake up i wake up to him and i love it.
There's only one thing i dont like about him and thats when you pet him all his shedding hair goes up your nose. Its a horrible feeling of hair in your nose its like he decided to crawl right up in there and take a nap.

Currently hes 20 something pounds. His nickname from the family is Fattie and everyone loves him.

Now it has been two years and I currently have five cats (yes five) and i love them all, but people always have those favorites.
So tonight when i go to bed i look over at him smile and look at his blue bandana he always wears and curl up next to him, knowing tomorrow he'll be the first thing i see in the morning just like every morning soon to come. 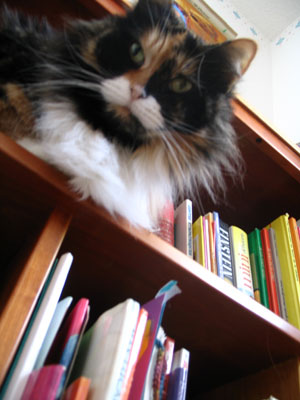 The author's comments:
I decided to write this story because this morning when i woke up I found im curled up into a ball sleeping in the gap in my knees purring away and i told myself "Why not write a story about your little cat over there?" So thats exactly what i did.
Post a comment
Submit your own