Volunteering at the Brookfield Zoo, I come in contact with all kinds of people. On days when 20,000 come through the zoo (I'm not exaggerating), I'm bound to run into some pretty interesting visitors. There are seven types of guests I encounter: the Family, the Grandparent and Grandchild, the Young Couple, the School Group, the Teenagers, the Lonely Adult, and the Problem Child. Needless to say, I wouldn't volunteer my time at the zoo if I weren't entertained.

Equipped with a wagon and a cooler with enough granola bars for a week, the Family is the most common sight. Usually two parents, with a variety of ages for the children. They are easily spotted, one of the parents holding a map, turning it around and then around again, while one child runs off to chase a squirrel. The parents usually ask the questions when approaching a volunteer, and then try to force their youngest to “Pay attention to the nice lady holding the skull and maybe you can learn something for once.” Families are attracted to, well, the big attractions. The baby tiger definitely draws a crowd, and when multiple groups of families congregate in one spot, they make an impossible-to-pass roadblock. Since a visible green polo shirt marks workers at the zoo, they must wait patiently for the families to move, rather than hampering the zoo experience by asking them to make room on the path.

The Grandparent and Grandchild

While similar to the family, this pair differs quite a bit. For one thing, the Grandchild is much better behaved with their poppa than when Mom drags them around. The Grandparents usually have fewer children with them, two at the most. The Grandparent often is carrying the child and asks simple questions, like “How much does the lion sleep?” “What's the lion's name?” These guests are probably the easiest to deal with.

When it's the summer and there are no more places for dates, the zoo is the best spot to visit with your loved one. Ranging from 16 (no one wants to be driven by Mom to the zoo on a date), to about the 30's, the Young Couples usually keep to themselves, although they are sometimes accompanied by a third wheel. They are generally only interested in each other, and the animals. Often I will be standing in front of an exhibit with a specimen, a skull or animal fur, and the male will ask questions, actually interested in what I have to say, while the female stands a few feet away, studying the map. The Young Couples never cause trouble, and are as annoyed with trouble-making children as zoo workers.

Two adults at the front, two at the back, and one long, long double line of children, each holding hands with the person next to them. Each school group wears one color, so a huge parade of red shirts, or a sea of orange-shirted children disperse around an exhibit. These guests are the hardest to talk to, because they are constantly moving to keep up with the group. I always look for a good-sized rock to stand on, and project my voice to control and entertain them. Dancing for them also grabs their attention.

Barely noticeable. They don't talk to zoo workers, they don't ask questions, they don't ask for directions, they don't even carry a map, they barely talk to anyone except their friends. There isn't much a zoo worker can do for these visitors. They can usually take care of themselves like adults, but like young children, couldn't care less about what a volunteer has to say.

The Lonely Adults walk around the zoo, always asking questions, and make you wonder why they are alone. They are usually older, 50-plus, wearing a visor, shorts, and a T-shirt, and carrying a water bottle, a fanny pack, and a map. They also like to tell stories. If I mention an animal, they will tell you about watching “Animal Planet” when a lion took down an elephant. If I comment on the nice weather, they have a story about that one really hot summer back in the '70s. On the outside, I am a zoo employee; I have to act very ­interested in what each one has to say. While they might actually have an ­interesting story, on the inside, I am still moaning about how much this guest talks and wanting to go to lunch and be able to sit down after being on my feet for hours.

The Lonely Adults are kind, don't cause any trouble, and basically just want to talk. There are those days when you stumble upon one with a great story, which becomes the highlight of the day.

This is the most frustrating type of guest. They pull feathers off the peacocks, they sit on and lean over the fences, they try to grab whatever is in a zoo worker's hand and run off with it, and they get lost. If I see a child walking around with a feather, there is a protocol: approach the child, and explain that they can't have the feather because the zoo needs it for something special. If they don't hand it back, ask again nicely. If that doesn't work, tell them the feather has mites, and watch them screech, drop the feather, and be dragged by a parent to the bathroom to wash their hands.

A lost child has a more critical protocol. If you come in contact with a lost child, determine if they actually are lost. Most likely Mom and Dad are standing 10 feet away but the child thinks they are lost forever. If they truly are lost, have them follow you to security. Sometimes they want to hold your hand, sometimes they are crying; often they are talking about the squirrel they just chased. That type of lost child is usually reunited with their family within five minutes.

Then there's the lost, lost child. An exasperated adult will go running up to every zoo worker to ­report that their child is missing. Here the protocol is to ask the adult what the child is wearing, how old they are, what color hair they have, and what their name is. Very often, a parent will describe their lost son, Colin, as four years old, in a red shirt with blonde hair. Colin will end up being a very tall four-year-old, with a blue shirt and red hair. No one ever understands why parents can't remember what their children look like. Maybe that's the reason they run off.

The zoo is a very entertaining place, for the guests and those who greet them, And with thousands of visitors coming to the zoo each day, you're likely to run into some very, interesting people. 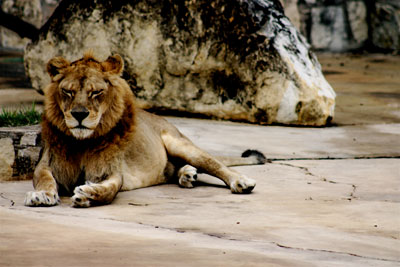