“We Are All What We Make Each Other” | Teen Ink

“We Are All What We Make Each Other”

Favorite Quote:
“The capital-T truth is about life BEFORE death. It is about the real value of a real education, which has almost nothing to do with knowledge, and everything to do with simple awareness; awareness of what is so real and essential, so hidden in plain sight all around us, all the time, that we have to keep reminding ourselves over and over: this is water. This is water.”

What is a soul?  Overtime, the initially religious concept has developed to mean so much more than some mystical, immortal aura that encompasses one’s being.  Philosopher Michel Foucault redefines the soul as “the prison of the body”––an exterior coating that forms as a result of the societal expectations. He believes that a soul is defined by one’s actions, signs, and words, much like an identity––in fact, one could argue, exactly like an identity.  Judith Butler’s article, “Gender Trouble” not only proves that there is no such thing as gender identity, but also that there is no such thing as any self-willed identity; we are all what we make each other.

To best illustrate Foucault’s notion of the soul, Judith Butler refers to his concept of prisoner rehabilitation:

"The strategy has been not to enforce a repression of their desires, but to compel their bodies to signify the prohibitive law as their very essence, style, and necessity.  That law is not literally internalized, but incorporated, with the consequence that bodies are produced which signify that law on and through the body; there the law is manifest as the essence of their selves, the meaning of their soul, their conscience, the law of their desire."

Foucault’s principle is that the surveillance of others, will eventually lead to a form of internal surveillance. He notes that reprogramming criminals has little to do with ending their desires, but rather has to do with slowly compiling criminals to act in ways deemed morally and socially acceptable.  Their deep-down inner desires may not change, but their surface––their actions, signs, and words––will mimic tacit, societal laws as a mechanism of survival.  Foucault argues that prisoners will reach a point where they will center their entire existence, on this outward projection.  They will eventually view the projected laws as their true desires––their “meaning,” and “essence”––losing conscious thought of old, inward yearnings.  Thus, the soul should not be considered the unconscious, hidden, and obsolete “core” of a person; instead, it should be considered the surface of the body.  However, in many ways this argument also signifies that one’s soul is one’s identity, for it is the way one is viewed––the way one acts, looks, and speaks. If Foucault’s concept is true, and one’s soul is merely a projection of accepted societal constructs––a projection based off others––then so is one’s identity.


Judith Butler explores the notion above relating it specifically to gender.  She argues that “the inner truth of gender is a fabrication and if a true gender is a fantasy instituted and inscribed on the surface of bodies,” then genders are “neither true nor false.”  She explains that genders are simply a way of succumbing to society’s laws––laws of how to dress, how to walk, how to look at your finger nails––and outwardly projecting those laws as a “stable identity.” Here, she illustrates that like the soul, gender identity is merely a projection based on the notion of others, but this concept applies far beyond strictly gender identity. Like the soul, identities rest on the surface of one’s body––identities such as scholar, athlete, hipster, or convict.  These identities don’t reflect people’s most inward desires, morals, goals, or instincts; rather, these identities, and many others, reflect society’s idea of what certain people “should” be.  For instance, as a privileged, private school attendee, society outlines a set of laws pertaining to my identity: I must have refined manners and social skills, work hard, and get good grades to get into a prestigious college, to go on to even high education, to get a high-standing job and esteemed position in society.  Social institutions such as school, family, media, workplaces and more, have projected these laws upon me so much so that I center my existence on them.  I view the inflicted laws as my true identity––my “meaning” and “essence”––projecting them back towards society on the surface of my body, just as Foucault’s prisoners do with their souls. While this idea that people aren’t really capable of defining or being their true selves may seem unfortunate, it also highlights a sort of unity amongst mankind.  We, as a collective force, hold the power to redefine someone or something, and in the end, we depend on each other to find a sense of order in an otherwise chaotic, potentially catastrophic, universe. 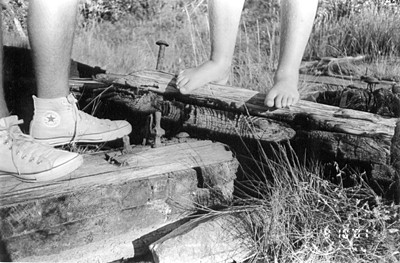