How does Dai Sijie depict the process of the Little Seamstress being influenced by her environment? | Teen Ink

How does Dai Sijie depict the process of the Little Seamstress being influenced by her environment?

In Balzac and the Little Chinese Seamstress, the narrator and Luo, both of whom have anti-revolutionary family members, travel to a rural area in Sichuan Province to be re-educated due to the coercion from local authorities. The Little Seamstress, the only daughter of a popular seamstress in the areas, is attractive and curious but shares characteristics of a Chinese rural woman. Provided the historical context, People’s Republic of China was primarily a collectivized agricultural country during the Great Proletarian Cultural Revolution, provided the futile efforts to rapidly industrialize China in the Great Leap Forward in 1958. Nonetheless, by harvesting a sincere friendship with the two young men and having access to literature, the Little Seamstress ultimately transforms into a confident and liberated urban girl. The tremendous comparison between the Little Seamstress’s two distinct statuses reveals the influences of the Chinese traditional culture, Communist doctrines, and interpersonal relationships. According to Dai Sijie’s depiction, the external environment inevitably nurtures an individual and fundamentally affects one’s identity to an unexpected degree.

Due to the introduction and propagandas of Communism in China, Communist doctrines were forcefully injected into people’s ideologies, and the Little Seamstress is also a subject of such influences. Regarding supernatural powers, the Little Seamstress reveals her opinion that one “cannot believe in them totally” or “deny them totally” and implicitly expresses that she partly completely supports atheism and materialism, both of which are important principles in Marxism (Dai 20). The Chinese traditional culture can be described as a fusion of Confucianism, Daoism, and Buddhism (introduced from India). Both Daoism and Buddhism involve supernatural powers such as Daode Tianzun (Daoism) and Tathagata (Buddhism), and Confucianism suggests that these powers do exist although they should not be discussed. By suggesting that she does not expect the narrator to denounce her, the Little Seamstress is actually confident in insisting upon her beliefs that are rooted in the Chinese traditional culture. This establishes that Communist propagandas and the cultural environment rooted in Confucianism together foster the thoughts and identity of Chinese people.

Chinese traditional culture, an inconspicuous part of the environment, has an immense impact on the development of the Little Seamstress because it is deeply rooted in people’s ideologies. Later in the novel, when the Little Seamstress has established a settled relationship with Luo, she acknowledges that her motivation to dive is the inner desire of “pleasing Luo. (Dai 73)” According to the Confucius philosophical doctrines in the Book of Rites, one of a woman’s four primary virtues is to maintain a demure and compliant physical appearance for the purpose of pleasing her husband. Therefore, the Little Seamstress, like most of her contemporary rural women, essentially submits to Confucian doctrines, an indispensable part of Chinese culture, by clarifying her ultimate purpose of wanting to “[please] Luo. (Dai 73)” However, the method the Little Seamstress adopts is not that recommended in the Book of Rites, which is attributable to the overthrowing of Chinese traditional culture by the Chinese Communist Party. When the narrator and the Little Seamstress are in Yong Jing in order to arrange the termination of her pregnancy, the Little Seamstress says she wants to “visit the old Buddhist temple to throw a few notes over the fence, in gratitude for the mercy shown by the heavenly powers. (Dai 88)” Despite the discouragements from the authority by classifying Buddhism as an example of the Four Olds, the Little Seamstress is able to possess her own idea that Buddhism should be respected and supported by even “a few notes over the fence. (88)” In Western Han Dynasty, Buddhism was brought to the Chinese region by missionaries and was not further promoted and developed until Tang Dynasty, after which its influence spread to almost every member in society. The Little Seamstress, as the “princess of Phoenix Mountain,” is evidently no exception because she is deeply affected by the legacies of the Chinese adaptation of Buddhism, an essential part of Chinese culture (Dai 11).

It is surmised that interpersonal relationships responsible for one’s social environment are extraordinarily influential to the Little Seamstress because different perspectives and values are inevitably introduced to her, which foster critical thinking and accelerates personal transformation. Although the Little Seamstress is almost illiterate at the beginning stage of the novel, she demonstrates her curiosity by being willing and “unabashed” to have conversations with young people from the city who are possibly more civilized in an effort to educate herself (Dai 13). The author is clearly suggesting that the Little Seamstress is distinguishable from the common type of Chinese rural women because she is confident and audacious rather than timid and self-conscious. It is foreshadowed that curiosity and a thirst of knowledge will permanently accompany the Little Seamstress in the upcoming parts of the novel and eventually result in her significant transformation, which differentiates her from the rest of rural women. In the ultimate chapter, the Little Seamstress, as the foreshadowing suggests, “betrays” the narrator and Luo and travels to Chengdu to become a confident and attractive urban woman. Prior to her departure, she says she has learnt “one thing from Balzac: that a woman's beauty is a treasure beyond price” (Dai 93). She essentially embraces independence and adulthood by pursuing a lifestyle of an independent city youth, which demonstrates her successful internalization of the novel’s inner messages to achieve this final stage of transformation while the boys failed to do so. Whereas the narrator, in his own trajectory, approaches reading in order to appreciate literary beauty, Luo is motivated by the desire to transform the Little Seamstress into an educated woman. In comparison, the Little Seamstress actually used reading as an approach to understand the world in a boarder context, which is quite ironical because the Luo is who presents the books to the Little Seamstress at the first place and is unable to fully achieve the outcomes comparable to those of the Little Seamstress.

Literature plays a significant role in profoundly influencing the ideologies and personality of the Little Seamstress, liberating her from Communism and Confucianism and motivating her to pursue greater meaning for her personal benefits. Later in the novel, the literary work of Balzac that Luo read to the Little Seamstress is a “sacred object” that profoundly touches the Little Seamstress with an “invisible finger” (Dai 32). Thanks to the reading and patience of Luo, the literature by Balzac transforms and reshapes the ideologies of the Little Seamstress possesses. The development of deep critical thinking is essentially fostered by encountering ideas contrary to one’s original beliefs, and the Little Seamstress is no exception. By wearing a coat that consists of literary texts, the Little Seamstress is essentially embedded in the literature on it, symbolizing an extensive connection in between that is comparable to the intimate relations among family members. When she addresses the narrator, the Little Seamstress acknowledges that at the bottom of the lake, she encounters stones like “pale eggs” and “buffalo horns” (Dai 73). In literature, the deeper one explores, the more insights of the world can one obtain and develop. Likewise, as the Little Seamstress approaches the deeper part of the lake, she has access to a completely different scenery. The Little Seamstress is now able to use literature devices to describe an extraordinary scene that she appreciates, which is due to the influence of Luo’s storytelling to educate her. The Little Seamstress will not restrict herself to only encounter scenes in the lake, but she will instead continue her quest of knowledge and social status and eventually transform into a person fundamentally different to her initial stage. In later parts of her narration, the Little Seamstress describes her portrayal of a fictional character in The Count of Monte Cristo as an experience that is totally unfamiliar to her. She realizes that she can still possess her original identity while pretending to be a completely different person, which demonstrates her growing maturity because she is now able to handle multiple different, if not conflicting, identities. This also foreshadows that she will eventually abandon her original identity as a mountain girl and attempt to pursue more significance by transforming her identity, but her ultimate stage of transformation has not been revealed at this stage of the novel.

In conclusion, the Little Seamstress transforms from a Chinese rural woman who is attractive and curious to a confident and liberated urban girl. The Great Proletarian Cultural Revolution is considered by many as the most devastating and catastrophic time period in Chinese history. Even in such a unprecedented time period can the external environment, which consists of the influences of the Chinese traditional culture, Communist doctrines, interpersonal relationships, and literature, inevitably shape an individual’s desires and personality. The Little Seamstress develops a desire to independently travel to the city, which is supported by her courageous and confident personality. Both desires and personality, different parameters that are attributable to a character’s development, influence the individualism of the Little Seamstress. 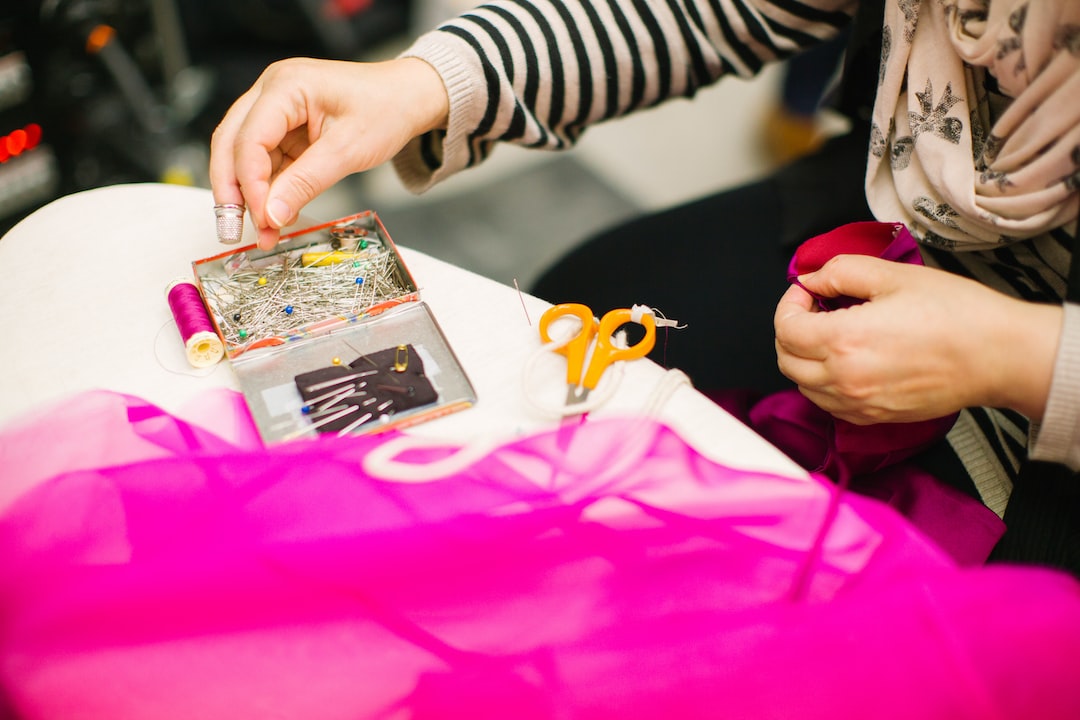 Photo by Kris Atomic on Unsplash