The Dangers of Tobacco | Teen Ink

The Dangers of Tobacco

I'm fifteen years old, and I have smoked a cigarette before. Let me tell you, I felt worse after than before I inhaled a dark cloud of death. It began because I was curious about what it felt like after seeing my brother smoke. He would get up and go outside to smoke no matter what. So I thought, if it's that great I should try it. When I tried it, I felt disgusted, I smelled and could feel a thick layer of dry spit mixed with smoke on my tongue. Now when I come across a smoker, I, and I'm sure many people as well, hold my breath as to not inhale second hand smoke or get a whiff of the smell. When I come across a tobacco chewer, I hold my head down and try not to make eye contact. If I do, I see the brown spit in the corner of their mouth and almost puke. Tobacco is disgusting and harmful to the user, those nearby and society.

Smokers are the ones being most affected. Some may be thinking it's their fault and at one point it is. Most want to quit, but are forced to continue because nicotine in tobacco is addicting. Of the 46 million current US smokers, 70% say they would like to quit (Ask and Act Tobacco Cessation Program). Tobacco users feel trapped and forced to continue to use it. Then, when they decide to quit, they face withdrawal symptoms. These include feelings of depression, trouble sleeping, feeling irritable, restless/jumpy, trouble thinking clearly and many more symptoms (Do I Have Nicotine Withdrawal?). They want to quit because they no longer feel the pleasure and they know the health risks. It can cause many cancers and is harmful to many parts of the body (The Effects of Smoking On Your Health).Chewing tobacco causes mouth cancers, dental problems, bad breath, heart disease/attacks, strokes, and painful sores in the mouth (The Pros and Cons of Chewing Tobacco). Tobacco can be harmful, but also beneficial.

Tobacco may provide alternative relief or prevention of some diseases in certain individuals (Health benefits of Smoking tobacco). It is said to be a stress/anxiety reliever and an appetite suppressant, which is beneficial for weight loss (The pros and cons of chewing tobacco). Also the risk for Parkinsons and Alzheimer's disease is 50% less likely in smokers.  Also nicotine reduces psychiatric, cognitive, sensory, and physical effects of schizophrenia (Health benefits of smoking tobacco). Children who were exposed the second hand smoke may also be benefited than those who were not exposed. The children exposed had lower rates of allergic asthma, atopic eczema, and food allergies (Health benefits of smoking tobacco). Tobacco is also beneficial to society. A pack of 20 cigarets can cost as much as $10.56 including federal/state excise taxes, which accounts for 43.8% of the retail price (Economic facts about U.S. Tobacco production and use). That is almost half of the tobacco industry's profit which is later used for the community. The taxes are used for tobacco related health education programs, disease research, medical/hospital treatment for patients who can't afford it, fire prevention and environmental conservation (Cigarette and tobacco products taxes). In a way it's giving back to the people and society.  It may not be enough to balance the scale of good and bad.

The use of tobacco is the leading cause of preventable disease and death in the US, accounting for more than 480,000 deaths every year. More than 16 million Americans live with a smoking related disease (Current cigarette smoking among adults in the United States). No doubt most people know that tobacco use causes cancer and many other diseases. Although it may help relieve and prevent disease, tobacco causes diseases and they add on making your situation worse. Tobacco affects almost the entire body. Smoking related illnesses in the US cost more than 300 billion each year in medical expenses and lost productivity (Economic facts about U.S tobacco production and use). It helps the society, but it also affects it greatly in a bad way. Also, almost 50% of their profit is being taken away, but tobacco industries still manage to spend billions of dollars each year on advertising and promotion (Economic facts about U.S tobacco production and use). This must be because all the people already being affected isn't enough, including the people affected by second hand smoke.

Smoking affects the whole world. Chewing tobacco can give the same pleasure, but is smokeless, non invasive for people around, and has no respiratory risks (The Pros and Cons of Chewing Tobacco). So getting rid of tobacco completely will be difficult, but limiting the ones affected can be done. The benefits can be ruled out by the disadvantages. Prevent the use of tobacco and stop using for a healthier and happier life, not just for yourself but your loved ones too. 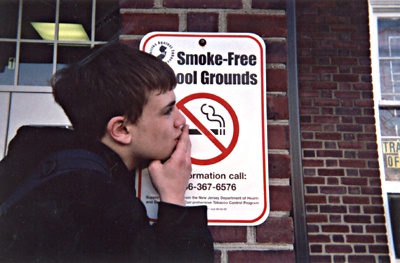