The Tao of Kairos | Teen Ink

The Tao of Kairos MAG

I nudged Kairos in the ribs. He huffed in annoyance. “Come on, buddy. I know it’s hot, but pick it up a little bit,” I hissed.

Kairos was an immense horse with a bulky build and hooves as big as my outstretched hand. His abnormally large eyes were a dark brown that made you want to dive in to learn all his secrets. If Kairos were a human, they would tell him not to play poker.

“Make him go faster! He’s barely moving,” barked the trainer. Austin was a stout man with scraggly gray facial hair. To my surprise, I was intimidated by this small man.

Sweat dampened Kairos’s dusty coat. He gave me a scornful look out of the corner of his eye and picked up speed. As we rounded a tree, Kairos swerved, nearly throwing me. I yanked him back, then felt a sudden pain in my leg, then another. My eyes darted to my calf. It was covered in black and yellow spots that were moving.

Wasps. WASPS! I felt a scream welling up in my throat – or maybe that was the anaphylaxis starting. I knew I should conserve as much air as possible; in minutes I would be unable to breathe. I’d be unconscious in a few more, and then I would suffocate. I pulled Kairos to a stop.

The wasps were everywhere. Zap. Zing. Zow. I was stung on my back, my arms. I felt the venom pulsing through my veins. I jumped off Kairos, who seemed pleased with the sudden end to the lesson. He planted his plump face in the nearest patch of grass and nibbled away. Well, at least he’s calm in a crisis.

I unzipped my saddle bag and grabbed my EpiPen, Benadryl, and cell phone. Gasping, I sprinted to the trainer, the sun stabbing my eyes and the wasps stabbing my limbs. I kicked off my boots and threw them as far as I could. No doubt they were filled with stinging insects.

“Allergic to wasps,” I panted, fumbling with my phone.

Three numbers. 911. How hard could this be? Very hard. My hands were shaking and puffy. I could barely see the numbers on the phone, let alone press them.

“Get the case off!” I shoved my EpiPen at Austin.

Suddenly I heard the click of the Epi-Pen needle and sounds of distress. “I-I seem to have pricked myself,” Austin said.

My eyes moved from the blood pooling in the trainer’s dusty hand to my EpiPen. If I hadn’t been so afraid, I would have laughed. Austin seemed to deflate. He sank to the grass clutching his chest. His breath came in gasps and wheezes. I don’t remember how I managed to tell the ambulance how to find us.

My throat stung. I could feel my lips and tongue buzzing with blood, growing spongy. Benadryl. I tried to pull the pills out of the foil, but my fingers wouldn’t work. The world seemed fuzzy and far away. My vision blurred with the rhythm of my hastening heartbeat.

Who is that? Paramedics can’t be here already.

I tried to locate the voice. A man with wild brown hair and tennis shoes was staring at me. I tried to focus, then nodded. He reached for the Benadryl in my hand and tore at the packet. I sighed and collapsed into the grass.

“Do you have an ambulance coming? Because that guy doesn’t look so good either,” the runner said.

I nodded absently and glanced at Austin. The man handed me a Benadryl. He took another package and went to work prying it open. I popped the Benadryl in my mouth and felt it fizzling on my swollen tongue. Then another. The tightness in my chest began to loosen.

Flashing lights appeared. A swarm of people with big bags came rushing at me. “She’s conscious,” a female voice sang.

“Are you allergic to bug stings?” grunted a deep male voice.

I tried to nod.

“You’re going to feel a pinch in your arm.” He wasn’t kidding.

Austin was still sitting, EMTs crouched around him. I felt an arm cinch around my waist pulling me to my feet. “What about Austin,” I slurred.

“EpiPens aren’t good for people with heart problems, but he’ll be fine.”

The paramedic led me across the meadow. Two ambulances were there along with a fire truck and a few squad cars. Lying down in the ambulance, people scrambling in beside me, doors closing, I caught a glimpse back into the meadow. Kairos’s head was bobbing up and down as he grazed. I envied the horse. In the years to come, I would need the steadfastness that he possessed.

Then Kairos looked up. I met his huge brown eyes and let them skim my soul. For a second, I was sure that he had read my mind. Then I was pulled away, sirens blaring.

Through the thick glass of the ambulance doors, I watched Kairos go back to nibbling grass. 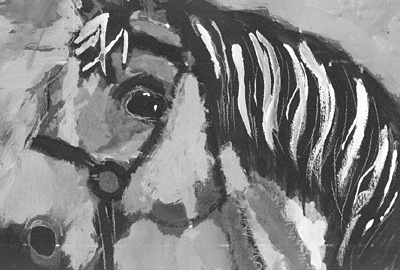