It’s not that I wish I had cancer. It’s just that when

I look at my brother, I want to be treated the way he is.

When I was seven and Mike was five, he was diagnosed with a skin cancer called melanoma. For months, my mom had been telling the doctor that she thought a mole on my brother’s chest looked funny. Finally she took him to a dermatologist who recognized what it was. The doctors were shocked. It’s extremely rare for kids to have a melanoma - especially at five years old. After measuring how deep the cancer reached, the doctors were even more surprised. While a melanoma is usually less than a centimeter deep, my brother’s was 2.5 centimeters. It was the surgeon’s opinion that in order for the cancer to have gotten so deep, Mike must have been born with it and it had been growing his whole life.

The doctors told my parents that they would operate to see if they could get rid of the affected area but that it didn’t look good. Of course, my parents were hysterical. They’d just been told there was a good chance their five-year-old son would die.

Being seven, I didn’t understand what was going on. I saw death as something that happened to old people. I figured anyone my age couldn’t get any sicker than a bad stomach bug. I remember sitting at the top of the stairs, listening to my parents crying in the kitchen.

Obviously, my brother was experiencing something horrible. Before the operation, they did all sorts of painful tests. I’m sure he was scared and had no idea what was going on. Because of this, everyone allowed him to act out, and he was never punished for anything. He got everything he asked for, and family always sent him presents: video games, movies, and the newest toys. At the time, all I wanted was for the operation to be over so I wouldn’t be second priority anymore.

Thankfully, my brother’s operation went well, and through the years, his checkups never showed that the cancer had returned. Unfortunately, spoiling my brother didn’t end when he got better. For years, he got everything he wanted, and it seemed he was always right and I was always wrong. Whenever I voiced that opinion I got the look and was told, “Mike was sick. He can’t help it; you need to understand.” Maybe my brother was angry that he had been sick, but he still needed some discipline. Instead everyone let him act like an animal. I wanted the attention Mike got; I wanted to be just as important as he was.

Fast-forward a few years, and Mike and I are in high school. Nothing’s changed. They’ve finally finished with the “he was sick; it’s not his fault” excuse, but they’ve moved on to just ignoring anything that he does wrong. Not that he’s going out and selling drugs, but my brother’s still the same spoiled brat he always was, and my parents act as though it’s completely okay for him to treat everyone badly. It’s stupid stuff like when my mom tells us to do something, he just laughs and turns on the television, and she just smiles. Sometimes I feel like Mike is my parents’ miracle child, and in order for me to measure up to his just living, I have to do something extraordinary that I’m not capable of. I’m not Mike, I’m no sports star, I come home past curfew, the cops in town don’t exactly love me, and I haven’t miraculously survived any diseases.

So, I don’t wish I had cancer. That must be terrible. But I want the same attention he has always gotten and the “Get out of jail free” card too. The worst part is the guilt I feel. What sort of person resents her younger sibling for surviving cancer? What kind of selfish human being wants a sickness so that people will treat her better? I ask myself these questions, and it makes me feel horrible to think that the answer is me. It’s not that I wish I had cancer, but sometimes I think that if I had, my life would be happier now, and that kills me. 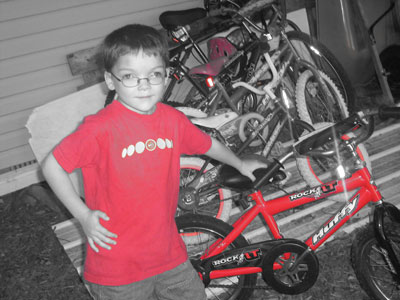 Favorite Quote:
'The only things worth doing on the weekend are completely pointless and wastes of time."

Favorite Quote:
"Pippin: What about elevenses? Luncheon? Afternoon tea? Dinner? Supper? He knows about them, doesn't he?" -
-- The Lord Of The Rings: The Fellowship Of The Ring

View profile
dont feel bad for wanting the attention that your brother has. im sorry if i have this wrong, but after the cancer got removed 15 or so years ago, hes been fine. the excuse is worn out. it was a really good piece of writing and i feel bad for you and your brother
The_Pen_is_Mightier GOLD said...
on Apr. 18 2011 at 4:21 pm
The_Pen_is_Mightier GOLD, North Woodmere, New York
13 articles 0 photos 5 comments

Favorite Quote:
"There is nothing so unnatural as the commonplace."- Sir Arthur Conan Doyle

View profile
I know, to a certain degree what you mean. Being the oldest child is not easy in its own right, but with a younger sibling with "issues," it's that much harder. It's nothing compared to what you and your brother went through, but my youngest sibling has a learning disorder. For a while, my brother and I were forced into her shadow and it wasn't fun. Like your brother, she is still a spoiled brat who gets her own way. I feel your pain and know that you are not a terrible person for wanting what he has. Take comfort in the thought that as an adult, you will be a fully functional member of society who benefits others and he will need your help just to stay afloat because he skated his way through adolescence and will make him work for it.
Aderes47 GOLD said...
on Apr. 2 2011 at 7:07 pm
Aderes47 GOLD, Cambridge, Massachusetts
11 articles 0 photos 897 comments

I agree with Joy and everyone else. You sholud show this to your parents and then mabye they'll realise how serious you are and how this makes you feel. Your not a bad person at all. I'm sure I would feel the same way if I were in your shoes. Good luck with your parents. Keep writing:)

View profile
This piece was very, very good.  You really captured the emotions in it well.  I'm so sorry for you and your brother.  It's not your fault.  You're a good person.  Never underestimate yourself.  Keep writing :)
musiclover114 SILVER said...
on May. 6 2010 at 5:21 pm
musiclover114 SILVER, Woodstock, Georgia
7 articles 0 photos 82 comments

born an original, why die a copy?

View profile
I don't think it's wrong of you to feel that way.It's amazing that he survived cancer,but now that it's over he shouldnt still be treated so much better than you.I'ts not fair.It's sorta the same at my house,but its b/c my little brother is the baby in the family.He gets away with everything.
veevee305 BRONZE said...
on Apr. 15 2010 at 10:15 pm
veevee305 BRONZE, Chesterfield, Missouri
2 articles 0 photos 1 comment

Favorite Quote:
"Don't just be good, be good for something." --Henry David Thoreau

Excellent article! I get what you mean about parents treating a chronically ill sibling very differently.

Not that I'm saying what your parents are doing is right, but it's simply not often discussed how a sibling feels about the special treatment their brother/sister gets, or is glossed over. It really ought to be addressed more.

Favorite Quote:
Shoot for the moon, even if you miss, you'll land among the stars -Les Brown

View profile
I agree with everyone else: talk to your parents, and show them this amazing article you showed us.  But I understand what you're going through. My step brother is 24 years old.  He was born with a disease that has him paralyzed from the waist down.  He can do pretty much everything I can do, and sometimes better, but my step mother babies him.  It's disgusting and annoying so i get it...
BasketballChick5 said...
on Mar. 10 2010 at 9:17 pm
BasketballChick5, San Diego, California
0 articles 1 photo 114 comments

View profile
Sorry! You need to tell your parents what you just said and see what they say back!!! its not his fault and in my opiniopn the pnly reason they bought so much stuff is becaus ethey said he could die so ya dont take this out on anyone!!!!
practicerandomkindness said...
on May. 30 2009 at 3:59 am
practicerandomkindness, Rindge, New Hampshire
0 articles 0 photos 46 comments
View profile
I know this may sound weird, but maybe talk to a guidance counsler. They can really help you. They helped me.
Joy said...
on Aug. 15 2008 at 4:27 am
Wow. When I read this, I literally teared up. It sounds like your living a tough life. I don't know if it would help, but a talk with your parents might lead to some changes. If that's too hard, maybe you should show them this article. Either way, I hope your life improves.