Why not smoke a lil Bud? | Teen Ink

Why not smoke a lil Bud?

Favorite Quote:
"Don't take life too seriously, you don't get out alive anyways."

Is Marijuana a Drug? What makes it a drug? Who decided that Marijuana was going to be drug? What kind of effects does Marijuana really do; and finally should it really be illegal?

The definition of a “drug”; is any substance that, when absorbed into the body of a living organism, alters normal bodily function. Many people through out the United States stands at a still deciding whether or not marijuana is a drug. When looked up the effects that marijuana does have, there are no negative effects from smoking or digesting the plant.

The effects on the brain include; an increase on pleasure, memory, thought, concentration, sensory, time perception, and coordinated movement. When looking at what marijuana effects the heart; it does increase heart beats anywhere from 20 to 50 times a minute, but it also drops blood pressure.

Some say because if smoking marijuana the dabree will end up affecting your lungs and lead you on the road to lung cancer. There is no such evidence that a pot smoker will end up with cancer. A pot smoker will, however, experience heavy coughing, and an increase production of phlegm.

So if marijuana has little to almost no harmful effects, why is it illegal? William Randolph Hearst, in the 19th century, was an owner of a logging company. He took notice that hemp, marijuana, was being used for cloth, rope and other productive objects used in society. Hearst logging company started loosing money and falling apart. He spends millions of dollars campaigning against the use of marijuana, and took it to a federal offence.

Researchers have found that hemp is 10 times more reliable then anything we use today.

So, as our economy has fallen to pieces, why not bring back up the past and use what “GOD” has given us to begin with. Bring back hemp. Costs of paper, clothes, and oil would drop dramatically. Our trees would grow back and the health of our society would increase dramatically.

“Bud makes me focus,” exclaims a local pot smoker, “without it, I’m nothing, I can’t focus and I refuse to take any pills to calm me down.” Marijuana isn’t only used for calming someone down. There are several positive effects from this plant; other then the production of inanimate objects, marijuana is used to help cancer patients consume food. The active ingredient in pot is THC, Tetrahydrocannabinol. One of the effects this ingredient is a craving for food. Pot also helps with a mood elevator. Laugher is one of the most common reactions from smoking the plant.

“You act stupid when smoking bud. You have no motivation, no brain activity, and no nothing. You’re more likely to do something stupid.” A local non-smoker replies. In fact, smoking marijuana does not change your judgment what's so ever. There are responsibilities that need to be taken into consideration, like not driving. But that’s the same common sense that someone has when they’ve been drinking. The statement, you have no brain activity, is a statement that isn’t true. When someone has consumed bud, they’re brain activity increases. Most people have experienced more artistic abilities, new self-realizations, and even inventions.

So why is Marijuana illegal? You tell me. 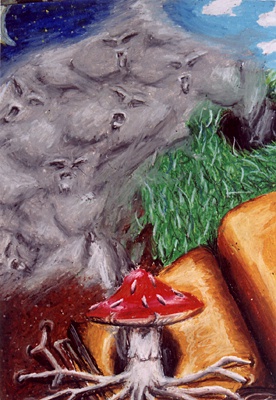 pjpw2320 said...
on Mar. 29 2013 at 9:00 pm
So if there are no harmful effects from it and only positive effects then why does the writer say that one should avoid driving when smoking pot?