In 2008, an 18 year old killed herself because of the harrassment from fellow classmates. All she did was send a nude picture to her boyfriend through texting (in other word she "sexted") and as soon as they broke up he forwarded it to his friends. In the following months life for this teenage got so bad she was depressed, miserable and was afraid to go to school knowing that the name calling would never stop. In May 2008, she went on a Cincinnati television to tell her story. Her purpose was plain and simple, "She didn't want anyone else to go through the same thing she went through." Two months later Jesse hung herself in her bedroom. This was the first case in the nation in which a connection between sexting and suicide is drawn.

The only other case happened just months ago to a 13 year old girl. She lived in Florida with her mom, Donna, and dad, Charlie. Hope was a "A and B" student in school except in math, she had many friends, she went to church every Sunday, and she knew what she wanted to with her life. She wanted to attend the University of Florida and major in agriculture. The last week of school in June a chain of events happened that shouldn't happen to a 13 year old. Hope sent a nude picture of herself to a boy that she liked. Another girl got a hold of the boys phone and forwarded the picture to other people. It circulated through the Middle School Hope attended and also the High School nearby. The last week of school was brutal. As soon as she would walk in to classes or past people they would whisper quitely to each other and shout cruel names at her. She had to be surrounded by her friends in hallways just to get to classes. Hope understood that it was her own fault for sending the pictures. Two weeks after school let out the school found out about the picture and contacted Hope's parents. They issued a suspension for the first week of the new school year. Her parents took her phone and computer and grounded her for the summer. However, they let Hope attend the annual FFA convention in Orlando. At the hotel two boys from across the hall found out about the nude photo and bothered her all night to send them a picture too. She got scared after they wouldn't stop messing with her so she borrowed her friends phone and set it out in the hallway for the boys to get it. An adult found the phone before the boys did and saw the picture and reported it. When the school year started again Hope had her week of suspension and then went back to school. The harrassment still hadn't stopped from other children in the school. On September 11th a teacher noticed cuts on Hope's legs and made her talk to the schools social worker. The social worker made her sign a no-harm contract but never called Hope's parents to tell them. The next day Hope stayed home while her parents worked during the day. That night they ate dinner together. Later, Donna checked in on her and she was laying on her bed writing on her journal. At about 11PM, Donna went to say good night. When she walked in Hope's room She saw her daughter standing a few feet away — her head lowered, her hair was hanging over her face. "Hope, what are you doing?" Donna said. Then she saw that a pink scarf was knotted around the canopy of her queen-sized bed. The other end was wrapped around Hope's neck. Hope's mother called 9-1-1 and she was pronounced dead at the hospital. Things like this shouldn't happen to children at that age and the reason I wrote this is because Hope was my friend. I grew up with her from the time I was 3 years old until her last day. I would never have thought that this would happen to one of my own friends and I wish I could have stopped it. It wasn't even noticeable. I saw her a few weeks before she killed herself and no one could tell that she was in pain.I want people to be informed that this is a real life problem that is going on and it needs to stop. Now, all I can think is "If only". If only I could have stopped Hope from sending that text message. If only I could have been there to stop her from hanging herself. If only. I can't do anything now except inform teens about sexting and how dangerous it is. After these terrible events I will never have my friend that I loved so much back. I hope teens consider that just simply sending a nude picuture to someone could ruin their lives and the hurt the people around them. 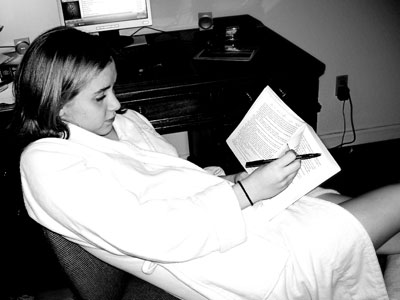 well...that shuldnt happen to kids..and im soorry for u

Favorite Quote:
I can't remember it clearly, but it went something like this:

"The past is the past, the future is the furture. But now, now is like a gift, which is why it is called present."

Favorite Quote:
"The truth with a bad intent, is worse than any lie you can ever invent."
"You are smarter than you think. You are stronger than you look. You are braver than you feel."

View profile
wow. i almost started crying when i read this. especially the ending. i dont understand why kids use 'sexting' anyway. i completely agree with u. it could ruin their lives and hurt others around them. plus, where's your dignity?? be kind to yourself and ur body. im so so so sorry about ur friend Hope. u have 2 understand though that under any circumstances it's NOT ur fault. Hope made her choice becuz she was hurt deeply. i wish u the best of luck!!
Anna135 SILVER said...
on Feb. 5 2010 at 6:29 pm
Anna135 SILVER, Centennial, Colorado
9 articles 0 photos 3 comments

Favorite Quote:
Being perfect doesn't mean that you never make any mistakes, being perfect means you make your own mistakes and you learn from them.

Favorite Quote:
"If you love somebody, let them go. If they return, they were always yours. If they don't, they never were."

View profile
Wow so all that really happened?