How Bad is the Big Mac Towards Your Health? | Teen Ink

How Bad is the Big Mac Towards Your Health?

Health is extremely important in a teenager’s development, as the body is going through so many changes. One of the most important aspects of health is the food. Ever since the rise of the fast food industry, there has been a major increase of dietary diseases and medical disorders. The most common are cardiovascular disease, diabetes, and metabolic syndrome, and especially the combination of diabetes, high blood pressure and obesity. All increases the risk of possible coronary heart disease, stroke or other situations involving the blood vessels, that distributes blood throughout the body. In addition, it’s proven that these health problems are most likely to happen when fast food is consumed more than twice a week. Todays, around 20.9% of US adolescents, aged 12 to 19, are obese. Yet, what is it in fast food that makes it worse compared to a homemade alternative?

Looking at one of the most known fast food items, the Big Mac from McDonalds, there are several ingredients that one would not be aware of, all contributing to its nutritional value. The burger is composed of 7 parts: The Big Mac Bun, beef patty, shredded lettuce, Big Mac Sauce, Pasteurized Process American Cheese, pickle slices and onions. The components with most sugar and soybean oil are the Big Mac Bun and the Big Mac Sauce.

Sugar is the third most abundant ingredient in the Big Mac Bun. It is not uncommon for bread to be compromised of sugar, as it provides the “food” for the yeast, allowing it to take its chemical change. The fifth most common ingredient included is soybean oil. The Big Mac Sauce not only contains sugar, it is also composed of a lot of soybean oil. The problem with soybean oil is the high quantity of Omega-6 fatty acids, and when overconsumed, it could lead to chronic inflammation. This is when the body’s response to fighting against things that are harming it (injuries, infections, toxins etc.) is chronic, which could over time lead to harmful effects towards the tissues and organs, causing heart disease, cancer, diabetes and arthritis. Another component of the sauce is the high amount of sugar. The sweet relish in the sauce, the second most abundant ingredient, contains sugar, high fructose syrup and corn syrup. The sauce itself includes, again, sugar, as well as caramel color. Caramel color is a dark brown food coloring that is made with a process called caramelization. This is another form of carbohydrate, adding onto the calories. The most common effects of too much added sugar is obesity and diabetes, including several other limitations. For the heart, there can be an increase in death from cardiovascular diseases, and the liver can become overloaded as the sugar transforms into fat. This leads to a high buildup of fat over a long period of time, contributing into fatty liver disease. This is one reason as to why sugar can be called the white poison or the white death.

Not only does regular fast food consumption cause serious heart complications, but also plays a huge role on the body’s outer appearance. With the fat from the fast food, the fat cells place themselves around the muscles which is why one would get “fatter,” because you are overconsuming on fats and carbohydrates. Even so, you would still need to eat healthy fats to maintain a normal balance in the body and health. Though, this is not the only place in the body that is impacted. Another big impact from bad fat is an increase in pimples. This is due to the Big Mac causing blood sugar levels to rise quickly, causing insulin levels to rise as well. Over time high insulin levels will eventually cause the skin to form pores and break out.

When you look at the nutritional content for the entire burger, it is 550 calories, with 30g of total fat, 11g saturated fat and 1010mg (1.01g) sodium. But it gets worse. When looking at the DV% of a product, it provides the daily value percentage for a 2,000-calorie diet. Therefore, the total fat has a 38% DV, saturated fat is 53% DV and sodium is 44% DV. Overall, this counts for 6 teaspoons/ 29g of fat in one Big Mac. Thus, if one were to have 2 burgers, the total fat would be 76% DV, saturated fat would be 106% DV and sodium 88% DV out of the daily value. The troubling fact is, by having 2 Big Macs, you are exceeding over the daily value of saturated fat needed in a 2,000-calorie diet. That can cause health limitations, such as an increase of bad LDL cholesterol, clogging the blood vessels, again leading to heart problems. For the sodium percentage, eating 2 Big Macs, one would have to be aware of consuming the rest of the 12% DV in 2-3 meals.

Yet, if Big Macs have so many health limitations towards the body, how come it has not become more popular to create a homemade version, which would not only include fresh ingredients, but decrease the consumption of chemicals, as well as too much sodium, total and saturated fat. Making a homemade burger, you are able to eliminate the bad content (sugar, caramel color, soybean oil, etc.), which would make the burger a lot better. You are then also able to construct your burger the way you want, to make it healthier. For example, using whole grain bread for the bun, adding extra vegetables (as there is almost none in a Big Mac) and you may even consider replacing the beef patty with plant-based beef.

This replacement can become important as meat/ plant-based meat provides protein to the body. Protein has been proven to be one of the elements that makes you feel satisfied after a meal. Food is modulated through mu-opiod receptors (MORs) bracket on nerves of the portal vein that drains blood from the gut. Simply put, this is the process in which your body communicates when you have eaten something. When the MOR’s are blocked or suppressed you get a full feeling and a signal to the brain to limit food consumption. When digesting protein, one of the byproducts is peptides, showed to block the MOR's. Despite this, food modulation takes time from when you first eat to when the brain signals that it is full, which is why eating slowly helps to prevent overeating.

An easy way if you want to create your own healthier version of the Big Mac, could be to follow recipes, such as eatthis.com, providing the same ingredients as one would find in the original Big Mac. However, what makes this homemade burger relatively healthier is the big differences of calories, total fat, saturated fat and sodium.

Using the recipe from the website, there are 44.7% more calories in the Big Mac compared to the homemade, a 100% increase in total fat, 120% increase in saturated fat and 32.9% increase in sodium. Thus, this also makes a huge difference in the daily value percentage. The homemade burger count is 19% DV in calories, 19.2% DV total fat, 25% DV saturated fat and a 33% DV of sodium. This shows a substantial larger amount compared to the alternative, as some of the daily values are doubled in the Big Mac burger. The elements that makes up the huge differences in the nutritional content are the bread, sauce and the large increase in vegetables added in the alternative compared to what you buy in the fast food chain.

Therefore, it proves that there are several health risks with the constant consumption of something that many don’t often consider. So even though you know that fast food is bad, it is only the beginning of something worse, disturbing and the dark truth about fast food. Yet, the scariest part is that there is another factor that should also be evaluated during the consumption of any fast food. You are not only eating one item from the menu, but a whole meal. This would normally include fries and soda, which increases the health risks even more from sugar, sodium and fat intake. That is where, especially teens, have to ask themselves: Is this what I want to do to my body? 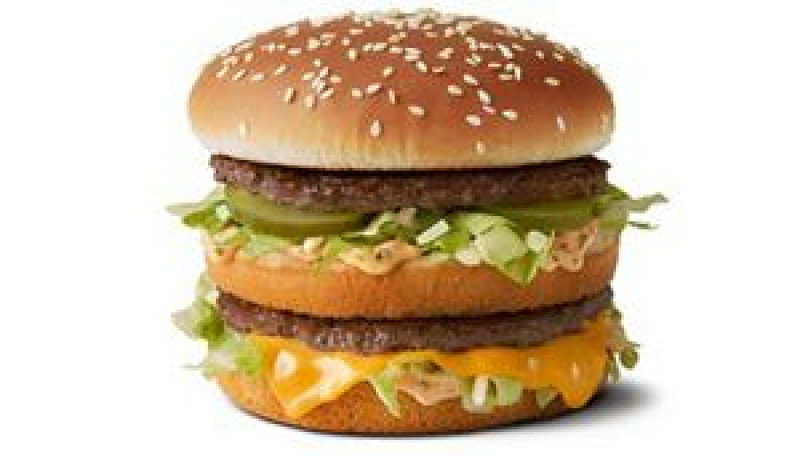