Favorite Quote:
"We should all start to live before we get too old. Fear is stupid. So are regrets."
- Marilyn Monroe

How Alternative Energy Could Save Our Future


Oil spills, global warming, pollution, and war; these are the harsh effects of fossil fuels being used as an energy source. Not to mention the continuously increasing price of gasoline needed for transportation vehicles due to this limited resource. Everyday when you start your car and head off onto the road, you are little by little, deteriorating the ozone layer. This invisible shield is what protects us from the sun’s harmful ultraviolet rays. We need to save our ozone in order to protect our families from health problems such as skin cancer and a climate issue known as global warming. One incident leads to another, which brings us to a worldwide issue known as war. The U.S, for example, has experienced a Cold War involving China over the oil riches in Africa. Whether it be violent or not, oil is the culprit for these conflicts. The world’s most recent tragedy, is the oil spill that took place in the Gulf of Mexico, which British Petroleum (BP) oil company is responsible for. This unfortunate event is the reason behind destroyed marine life and polluted beaches. Acid rain is also another form of pollution caused by the combustion of fossil fuels. Our planet is at a constant battle with the effects of fossil fuels and at this point in the game, we are losing. This is an energy source in need of replacing.


The sun emits 3.8 x 10^26 joules or watts of power each second! Solar energy is a renewable resource that will never run out. Not for 4.5 billion years at least. Solar energy is produced through flat mirror-like instruments referred to as solar panels. Solar panels are comprised of several individual solar cells which collect solar radiation from the sun and actively convert that energy to electricity. Solar panel systems are usually installed on rooftops of RVs, houses, buildings, etc. And are used for heating water or simply to turn on your bedside lamp. Although the sun is a powerful resource, it is not enough to replace fossil fuels completely. Solar power in the United States accounted for less than 0.1% of the country's electricity generation in 2006. This coming from the world’s second largest energy consumer, China being first.


The center of the Earth is around 6000 degrees Celsius - easily hot enough to melt rock. This renewable resource is known as Geothermal energy which means heat from underground. Geothermal power stations are usually installed in volcanic areas, where molten rock can be very close to the surface. This means heat. Holes are drilled towards the hot region, then engineers send cold water down in return for hot steam. The hot rocks underground, heat water to produce steam. The steam may be used to drive a turbo generator, or pass through a heat exchanger in order to heat water for homes. This source of energy is used around the world, but electricity production in the U.S was only 0.30 percent in 2006.

The Sun heats our atmosphere unevenly, so some patches become warmer than others. These warm patches of air rise, other air blows in to replace them - and we feel a wind blowing. We can use the energy in the wind by building a tall tower, with a large propeller on the top. This is called wind power and is most certainly a renewable resource considering wind is always around you. The wind blows the propeller round, which turns a generator to produce electricity. The best places for wind farms are in coastal areas, at the tops of rounded hills, open plains and gaps in mountains - places where the wind is strong and reliable. A major advantage of this resource is the fact that wind is free and produces no waste or greenhouse gases. Wind power produced 23.5% of its energy which is much greater than some of its sister alternates.

Water is made up of 75% of the earth’s surface. This is probably the world’s most abundant natural resource. We have used running water as an energy source for thousands of years, mainly to grind corn. This is known as hydro-electric power or energy from falling water. Nowadays there are many hydro-electric power stations, providing around 20% of the world's electricity! Usually in a valley where there is an existing lake, dams are built in order to trap water. This water is allowed to flow through tunnels in the dam, to turn turbines, and drive generators. Hydro-electric power stations can produce a great deal of power very cheaply. These dams are very costly to build, but once it’s completed, water comes free of charge without emitting any waste or pollution. A popular tourist attraction known as the “Hoover Dam” was built on the Colorado river and supplied much of the electricity for the city of Las Vegas. In the United States, 5.74% of its energy is produced by hydro-electric power.

In the coming years, fossil fuels need to be diminished, and renewable resources must be a priority. We need to use Earth’s natural resources to the best of their ability without causing pollution. Therefore the burning of fossil fuels isn’t a sensible option. Although not one specific resource will overrule fossil fuels alone, oil can be outdone by combining all renewable energies. That includes more than just solar power, wind power, hydro-electric power, and geothermal energy. We need the power of tidal waves, nuclear energy, biomass, wave energy, and pumped storage. Combining the work of all these renewable resources together can lead to success in putting an end to the use of petroleum oil, putting money back into our pockets, and giving back to our planet. Fossil fuels are still in high demand today and are the primary source of energy throughout the world. It is our job, the teens job, to recognize the obstacles the world faces today with fossil fuels and make it our goal to prevent these problems in the future by using alternative energy. 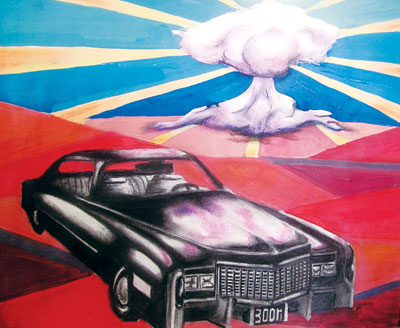 The author's comments:
Fossil Fuels have been an ongoing issue for quite some time. I really hope my peers will open their eyes to what's going on around them and put some effort into protecting our future. All of us can make a huge difference.
Post a comment
Submit your own