The Faces of Poverty | Teen Ink

The Faces of Poverty MAG

Favorite Quote:
I have studied many times
The marble which was chiseled for me—
A boat with a furled sail at rest in a harbor.
In truth it pictures not my destination
But my life.
For love was offered me and I shrank from its disillusionment;
Sorrow knocked at my door, but I was afraid;
Ambition called to me, but I dreaded the chances.
Yet all the while I hungered for meaning in my life.
And now I know that we must lift the sail
And catch the winds of destiny
Wherever they drive the boat.
To put meaning in one’s life may end in madness,
But life without meaning is the torture
Of restlessness and vague desire—
It is a boat longing for the sea and yet afraid.

I have always known what poverty looks like. In my rural hometown, I have seen homeless men on the street cocooned amidst all their worldly possessions. I recall my mother, always empathetic, driving home from the bank on a payday and stopping to give a stranger money – even though it meant that I would not get the new shoes I had been asking for. I was young, but quietly accepted that this person needed the money more than we did.

In second or third grade, I realized that some of my classmates didn't have new clothes or pristine binders when school began. Of course, being from a polite Midwestern family, I never spoke about this to a soul; I only wondered why some parents could not give their children what my parents gave me.

As I matured, I developed an interest in politics, and found that I had a mind for facts and an interest in impassioned discussions. Poverty inspired deep emotional reactions in me and became the vanguard of my battles. I began to question the structure of society. Why must some people work their entire lives without seeing any fruits of their efforts? Why do some go without while others live in excess?

I received an invitation to the Global Youth Leadership Conference and spent much of the school year dreaming of Europe and its cities: Vienna, Prague, Bratislava, and Budapest. I researched what sights to see and learned all the necessary phrases: szep napot, ich spreche nicht deutsch. However, I never really thought about what it would be like so far from home. Europe will be just like America! I thought. People are people. I had yet to learn the differences in the ways our societies function.

I&#39d been in Europe a week and had not seen anything particularly shocking – until we arrived in Budapest. With facades crumbling and bullet holes still visible from the 1956 revolt, the city seemed to have never recovered from Soviet rule. How could a modern European city be so poorly maintained?

What genuinely inspired a visceral reaction within me, though, was the number of people begging on the streets. Men, women, and most dreadfully, children lined the corners of many roads. I remember a young girl with golden curls, quite different from most Hungarians, sitting at a busy intersection with hands outstretched, pleading for change. I remember the look in her eyes, aged far beyond her years. She had seen more in her short lifetime than I had experienced in all my years.

Kneeling at the entrance to the subway, a man crouched, his forehead pressed against the filthy pavement in submission as he uttered an undeniable plea for help. His tired hands clutched a cup containing a single coin. His body was shriveled and scarred, his clothes, many sizes too large, were caked in muck. He was clearly starving to death. I wondered, then, what had caused this man to become so desperate. Others walked by without a glance as if he were a stray dog; eyes ahead, they gave him a wide berth, as if to prevent him from getting his hopes up for human contact or compassion.

Americans do not accept poverty as a fact of life. We are a blessed nation with a thriving middle class that often provides for the less fortunate, and rightfully so. Charity is a central value in the United States. Rather than viewing poverty with indifference, we choose to lend a hand, whether through food pantries or homeless shelters. We have required our government to take a stand against destitution. However, what does a society do if they do not have the resources of the United States?

I saw countless others like that girl and man during my days in Budapest. I also saw a change in myself. No longer was I simply citing statistics about poverty; I had seen it firsthand, and not in a shantytown in Liberia, a pueblo in Chiapas or in a refugee camp in Jordan – I had seen the faces of poverty in a modern European city.

Two years later, I still see them when I close my eyes. They will always be reminders of what I must do in my lifetime, what I must work for. The Nobel Peace Prize winner Muhammad Yunus said, “One day our grandchildren will go to museums to see what poverty was like.” This is my goal. This is what Budapest taught me. 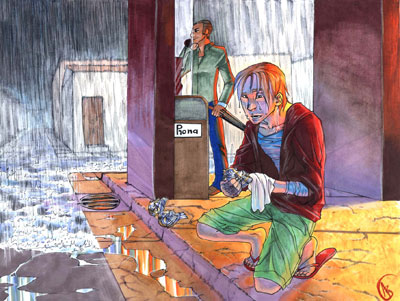 Favorite Quote:
"In the end it won't matter how many breaths you took, but how many moments took your breath away"

View profile
incredible, just incredible...this piece left me speechless..you are a very talented writer  and this article was, in a word, inspiring.....i hope that one day your goal is achieved, and poverty is nothing but a memory....wonderful job:)