“Hi Jason.”
The door was wide open and there she was. His ex. His favorite ex. Michelle. She was there. In Seattle. Her hair was dark black and curly, different from the brown it was before. She was wearing a skin tight black dress with a petite leather jacket and shimmering heels. She walked in and looked around his apartment. He was frozen in place until the clicking of her heels broke his trance. He closed the door and followed her in.
“Michelle—what…what are you doing here? What are you doing in Seattle?”
She stood there, very still, looking at his bright red couch.
“You got a new couch.”
He walked up to her and touched her shoulder. She turned slowly around. She was crying. Her eyes were bloodshot and her cheeks were puffy.
“Why did you come here?”
She wiped her eyes and walked around the coffee table and lay down on the modern couch. She looked around, but he could tell that she didn’t care. Her eyes were dead. And very angry.
“You said you were moving to Tampa. I looked for you. I missed you. None of your friends would tell me anything. You’re mom was the only helpful one of course…I told her that you left a lot of your things at my apartment. She was very welcoming after that. I just thought I’d deliver them to you personally.”
“Michelle….I can explain. I was supposed to go to Tampa. But then they moved me here. I just forgot to…call you. I’m so—“
“I don’t want any apologies. I just want to give you back what you deserve.”
She stood up off the couch and gently began to stroke his upper arm. Then she held his cheek and moved to the back of his neck. He wasn’t sure what was going on until he felt her lips on his. He hadn’t missed her that much since he left, but he had missed her kisses.
“But—Michelle,” he said in between kisses, “I didn’t leave anything at your apartment in Miami.”
Suddenly a loud bang went off and his chest began to hurt. As he was intoxicated with her lips he hadn’t felt her other hand pull out his semi-automatic gun and point it at his chest. He fell onto the bright red couch and blood began to pour out of his open wound, blending with the color of the couch.
“Thanks for leaving the gun. It really helped me with our breakup. Goodbye Jason.”
She stepped over his drooped legs and walked toward the door.
“Michelle…”
She turned when she heard him whisper out her name. She could see his eyes just over the edge of the couch. The light was fading. She remembered when she saw the light fading from her own eyes. She looked into the mirror by the door. The light was back. She smiled and blew him a kiss goodbye. She shut the door and walked down the three flight walkup. 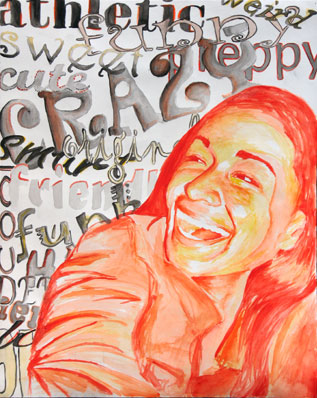 Favorite Quote:
The thing is to tell yourself that this is life, and chaos is part of it.