John Grayson sat in his small flat above Bakerlee Street, watching tendrils of fog collect in the horizon of the murky city, whose shadowy streets were already cloaked in a thick mist. John, who spent most of his time selling vacuum cleaners by phone, rarely took the time to examine himself and now found, staring at his hands under the thick haze, that they seemed foreign, that he did not recognize the freckles, the flaky skin, the protruding veins. The miasma grew to catastrophic proportions before John’s very eyes, and fearfully, he watched it wrap around his apartment, tracing its way through the kitchen, through the long creaky hallway, to the bathroom like a viscous veil. And there it sat, attracted to a particular silver object that proved magnetic, for only minutes later John found himself drawn to the bathroom as well.

As John walked down his hall, the fog began to dissipate, to dissolve into the blue walls, under the uncarpeted floorboards, until he saw the white paneled door with an inhuman clarity, and opening it, was exposed to an image that would wake him up at night for years to come.

Upon seeing the figure, his hands began to shake and lips tremble, his eyes grew wildly fearful, his brow quivered. The floor beneath him seemed to sway, like he was standing on a moving ship. Blood pounded in his ears, his forehead began to sweat, and suddenly he found himself on the cold tiles of his bathroom floor.

He inhaled sharply, and mustering up all of his courage, he finally opened his eyes; standing before him was the man that had ruined his life.

The man’s eyebrows were arched menacingly, his mouth contorted in a cruel snarl, but there was something benignly familiar about him, as if John had once loved this human wholeheartedly. Only now, how sinful were those eyes, how wicked that smile! Suddenly John was revolted by this human, and the man’s appalling nature became apparent in a way it never had before, concealed by the murkiness characteristic of John’s life.

“You!” He screamed at the man, his voice vibrating throughout the bathroom like a cymbal, “I can’t believe it was you! All this time I blamed my own mother, for sending me to that goddam college instead of the Peace Corps, and Erica for convincing me to move here, and even the freaking president of the United States for unemployment and the fact that I’m stuck with this goddam joke of a job, but all the time it was you! It was you!”

John saw a tear begin to form in the man’s right eye- he wondered for a moment if the man was here to apologize, but realized quickly it was too late for him to forgive the human who had already ruined so much; it was then John saw the glass cup. Without bothering to consider the implications of his actions, John grabbed the glass and threw it at the man, with enough force, John reckoned, to kill.

The glass whirled, spinning with years of concealed anger, and with the intentness of a man who can suddenly see; it hit its target with cruel precision, and the mirror shattered into a million pieces. 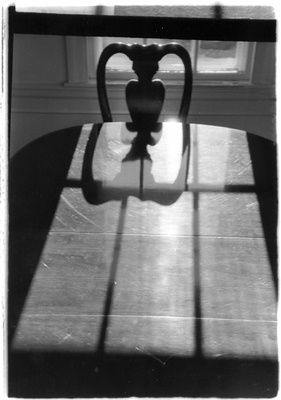