“The last time he had seen his sister was in the forbidden forest. Their ball had rolled into them when they were playing with it. She had said she would fetch it for him and they could continue to play but he knew that she shouldn’t have gone. He tried to convince her to not go and just go home but it was her favorite ball and she wanted it. He had followed her to the edge of the forest, not daring to go in. He fearfully watched his sister joyfully skip to her ball. She started to make fun of him because he believed the silly stories about these woods being forbidden. She bent down to pick the ball up. He saw it before she did. A spinning vortex of something, it stopped right in front of her. She dropped the ball and turned to run. It was too late though. The thing stopped spinning. It was a mixture of a bunny and a wolf. It was behemoth and it didn’t look too happy. It reached its paw out and grabbed her. The thing dragged her farther into the forest. She kicked and bite but her feeble attempts were no match for the behemoth thing. He cried out, too fearful to move. Finally he got up and ran home. He ran into the village shouting about his sister being taken away. The villagers looked sadly at the boy. Many children had been taken away by the thing but there was nothing that they could do. No one smart would go into those woods. He still looks at those woods in fear and that is why they have electric fences surrounding it.”

“That is not true Lizzy. They put those fences around it because there are dangerous animals in there.” Lori reprimanded, “Stop telling those children lies.” “Lori this is the truth. If you actually believe that crap about wild animals then you’re as gullible as they come.” Lizzy retorted. “Liz, Liz what do you think happened to his sister?” one of the children asked. Lori rolled her eyes and said, “Children if you’re done listening to stories then come and sit at the table for a snack.” All the children raced to the table. “Lizzy if you’re done story telling then come and help me with the food.” “It’s not a story. It’s a true story.” Lizzy huffed and walked to the kitchen.
“Bye kids.” Lori and Lizzy shouted out the door before closing it. “I love those kids.” Lizzy said. They walked up the street and took a short cut threw someone’s yard. They passed the forest but then Lizzy stopped. “You know if you don’t believe in the legends then why don’t you go in them?” Lizzy asked with a smirk. “The fence is on.” Lori replied a little scared. “No it’s not. They will turn it on in about an hour.” Lizzy said. “What if I get stuck in there?” Lori asked. “Don’t dilly dawdle. Just climb over and walk a few feet then climb back over.” “Fine, hold this.” Lori handed her book bag to Lizzy and started climbing. It wasn’t a hard climb and she was soon on the other side. Once you were over it wasn’t that scary. She walked a little into it and looked around. Everything was going great until she looked down. She saw something pink. She bent down to pick it up and looked at it. It was a deflated ball. The weird thing about it was that it looked different from any ball she had seen. The designs were of the Virgin Mary and that’s when she figured out it wasn’t a ball, More of a small sack that had been emptied of its contents. “Lori are you okay? You can come out now.” Lizzy yelled. “Okay. These woods aren’t so scary.” She replied. She threw the sack down and went to climb the fence. She barely got halfway when she felt that something was wrong. She turned around and saw a miniature tornado coming towards her. She screamed and climbed faster. “Lori what’s wrong?” Lizzy asked a little worried. She never got her answer. The tornado was faster than Lori and it was soon at the bottom of the fence. It stopped spinning and a bunny wolf thing reached up to grab her. Lori tried to climb faster but it was too late. The thing grabbed her and pulled her down. She fell and tried to get up nut the thing grabbed her legs and dragged her farther into the forest. “HELP ME. PLEASE LIZZY HELP.” Lori shouted. Tears were running down her face and there was nothing she could do. “LEAVE HER ALONE!” Lizzy shouted, banging against the fence but it was to no avail. The thing dragged the screaming Lori into the forest until she could no longer be heard. 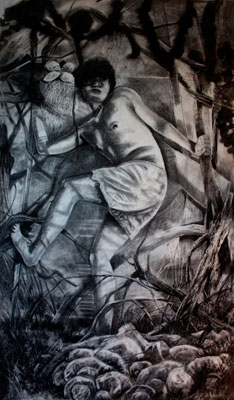 The author's comments:
I love fiction mysteries so here's one i began. I might continue it but I don;t know.
Post a comment
Submit your own