"Hello, dave," said the doctor slowly.
hello, Doctor.
"How are you?" slowly.
how are You?
"I'm well, thank you. Today i want to do some tests with you. Is that ok?"
only if it's ok with You.
"Well then, let's get going," said the doctor, forcing a smile.
The doctor and i were in a mental facility outside of Sacramento, California, with white walls, and white floors, and nurses draped in white. All of which i had stopped to thank for their help and had shaken their hands fervently.
"All right, dave, this might hurt a little bit," he said.
Why would You hurt me?
"Sorry dave, but it's for your own good," he explained.
Ok, Sir, if You say so.
After multiple needles he sent me back to my room, me thanking him the whole way there. Once inside i sat and wondered what this set of tests was about. Whatever it was, the Doctor said it was for my own good, so there could be nothing to worry about. my mind started to wander and i last remember thinking of how, um, how, um… then darkness.

I woke up alert. My mind raced. I tried to tell them, tried and tried, but my alternate personality, the one that overtook me quickly, that left only enough of my true self to notice the change, was mentally unstable. So I was in an asylum. This alternate self was not a brilliant doctor and scientist; it was an insecure man who worshipped everyone around him, felons and officials alike. But before, it hadn't been a problem; before, I had made my own medicine, in the laboratory in which I worked, but when my company evaporated because of conflict in ownership the maniac inside of me was allowed to flourish. My predicament is, well, exactly that, a predicament. Everything I said was discounted because of my mental volatility. But it wasn't my mind that was volatile, I was perfectly fine, it was the lunatic that had somehow burrowed itself in me that had placed me here.

For weeks now I pleaded with the doctors, to tell them what was wrong, but none had listened, had even pretended to listen; they just smiled and had me escorted back to my room. My world had been flipped; i had gone from a widely respected and internationally renowned biogenetic researcher to a man who received smiles of pity from worthless nurses while they ignored my every word. I had always been a slightly angry person, but after more than a month in captivity, my mind was frenzying and the insanity slithered through my veins with every waking moment. With every tick of the clock I was filled with anger about my situation, and resolutions to end it, but i had no way of showing these insignificant pests that they had no right keeping me here because the only thing giving them reason to have me here, was having me here. I needed a plan, something to get me out of here so that i could gain stability and become normal again. I needed a way out. I needed a lot of things, but currently my mouth was painfully dry. I hit the intercom, the only thing in this place i liked, and a nurse came with breakfast. I gulped down every liquid she brought and asked for more. Whatever "medicine" they had given me had really taken a toll; i was dehydrated, exhausted even after many hours of sleep, and had a pounding headache.

This fight was destroying me. My mind was torn, and my body did not know which side to follow. I could feel my body falling apart, almost as quickly as my mind unraveled. I could not fight this for much longer, for it grew every day. Was a few days of sanity worth the pain of losing it? An idea seeped into my brain, a horrible, cruel idea that I would never have imagined myself to imagine. How perfect it would be, to not lose, but concede to my illness. It was there, and it was growing, and there was nothing I could do about it. The asylum did nothing but fuel my plight. I could not stand this for much longer, and my fight was a pathetic one, anyway. Not noble like a fight against cancer, my fight caused me to thrash in my sleep and throw my head against walls in my enraged moments. This plague would get the best of me anyway, so why not let it on my own accord? Maybe I needn't fight, maybe I could just stop. Stop and not lose the shred of dignity I had retained. I thought about this for the rest of the day and finally surrendered myself to the idea that this was the best way, the only dignified way, left. I lay down in bed and felt the insanity coursing through my every vein, and instead of thrashing at it, I reached out and invited it further. I invited it and tempted it to grow and flourish, and for the first time in a long time I felt comfortable, and in a strange way, almost happy. The darkness spread like food coloring through crystal-clear water, and as it grew, I shrank under it's weight, until finally I was reduced to nothing, and whatever evil had burrowed inside of me had finally overtaken it's host. The vine had finally grown and strangled the life mercilessly out of its host-tree, but for the first time ever, with the tree's permission. To bring on death was such a beautiful way to die. 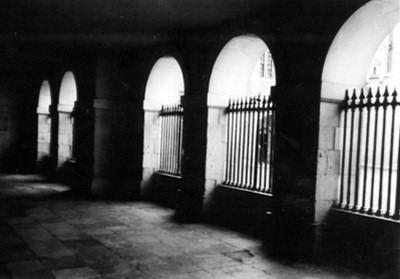 Favorite Quote:
"Life Is A Book; How Will Yours Be Read?' -- Lauren-Alice Danielsen