Favorite Quote:
“For beautiful eyes, look for the good in others; for beautiful lips, speak only words of kindness; and for poise, walk with the knowledge that you are never alone.” -Audrey Hepburn

Rain splattered the streets, during that dark, stormy night in North Yorkshire. The streets were littered with scattered beggars and vendors. Rarely was there a well-dressed sight at this time of night. A symphony of crying children and moaning elders rose into the darkness. The occasional shopkeeper would appear along the streets after closing his shop.

There was a sound. A sound of clicking boots against the slippery cobbles. A silhouette appeared. The shadow was a woman; she was running quickly, lifting her massive skirt as she went. Before long, her pursuer appeared. Dressed in black, and clearly a faster runner, he was sprinting after his soon-to-be victim. Something in his hand glinted. It shone like a shining silver crescent moon. Just waiting, waiting, for the moment when it would be adorned in scarlet.
The woman dove into a dark alleyway. Her chest rhythmically heaving up and down. Droplets of sweat trickled down her forehead, from exertion.
“Please, please, don’t find me,” she frantically mumbled to herself, between breaths. “Help me! Oh please.” As she turned around to leave, she let out a gasp. She saw him. His maniacal smile caused her to shriek as he lifted the dagger inches away from her face.
“I found you.” 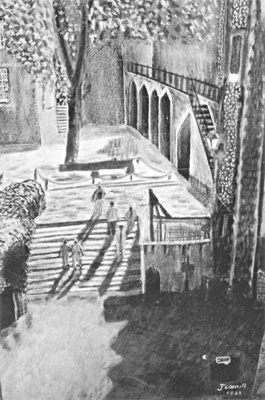 The author's comments:
We had to write a flash fiction piece in class, it turned out better than I expected!
Post a comment
Submit your own

Favorite Quote:
"Security is mostly superstition. It does not exist in nature nor do the children of men as a whole experience it. Life is either a daring adventure or it is nothing."
-Helen Keller

Favorite Quote:
"Be the change you wish to see in the world."~Ghandi