The drapes hung low, keeping out whatever weak rays the sun was raining down on the earth. Kelly stayed away from the window. The sun was no friend to her pale albino skin. She watched shadows dance across the floor, dancing to unknown music. They danced with slow smooth strokes across the dusty wooden floor. Kelly knew this place used to be beautiful. Even dusty and decaying it still retained that long lost feeling of beauty. Every time she closed her eyes the dust disappeared, the wood repaired itself and she saw how it looked in its prime, everything all sparkling and new. She imagined the rows of seats filled with nicely dressed men and women. She heard them cheer as the band took the stage and begin playing. The shadows became beautifully dressed dancers, moving around the floor with a primal need to be the best. They were all in time with each other and the music. She finally inserted herself in the scene and found she belonged in the shadows where she wouldn’t be seen, but she was seen. A young handsome man stared at her from across the room. She just knew he could see her. He dismissed himself from the girl he had been ignoring and started across the dance floor. No dancers bumped into him or even came near to it. He was soon standing directly in front of her. He didn’t say a word or make a move to get any closer to her. She in return did the same. Then he reached up and held his hand out to her. No one seemed to be watching them. It seemed like everyone was under a spell. The dancers had changed their dance. No one sat down; no one joined the dance floor. The only one who had stopped what they had been doing was the handsome stranger in front of her. She took his hand and was surprised to feel his warm skin underneath hers. He wasn’t. “Hello.” He greeted in a slight southern accent, and then it was gone. The beauty, the dancers, any sign of life was gone. She was back in the dusty decaying room. She knew it had all been in her mind but her hand could still feel his and the smell of him still lingered in her nose.

He had seen her. He had touched her. He had just joined into an eternal conversation with a girl newly there, but then he had felt a disturbance and he had seen her. And he knew she could see him. For the first time in five million years he had stopped doing what they wanted him to do and did what he wanted to do, and he could already tell they weren’t happy. Their music had gotten faster and more dangerous sounding. The dancers seemed to be running around the dance floor in panic but were in fact just dancing to the song. Maybe the paradise they had promised them wasn’t one after all? What if the hell hole they had left was better than the one they had willingly walked into? The living girl was just the start of this realization. For the first time he had arrived, he questioned the land that started and ended with their music playing. They could change every aspect of their lives with just a different chord on their guitar. Maybe the danger he had tried to avoid on earth had not given up but waited in every corner ready to pounce? For the first time since dying, he felt an emotion other than contentment, fear 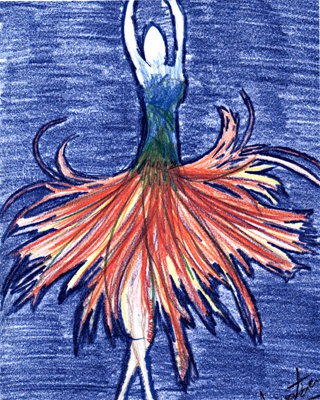 The author's comments:
I wrote this in church and I liked it.
Post a comment
Submit your own