Battlefields are loud. Of the very few films I have seen in my lifetime, none of them were able to depict this properly. Gunshots are much louder when you were right next to them, nearly shattering your eardrums whenever they went off. The cries and screams of the men engaged in battle surrounded me on all sides like a cage. But most of all, the thing that movies never show you, is that war is not some honorable way to sacrifice your life. It is violent and bloody, with men murdering each other in cold blood. Others are suffering from horrible injuries and no one, not even their own companions, are stopping to help them. For the first time in my very long life, I am frozen. The excitement I usually felt on the battlefield was gone. In its place I could only feel repulsion and most importantly, terror. I do not think I have ever felt terror before. I tried to wrap my mind around this new feeling, but something else was fighting its way to the front of my mind. Someone was screaming.

I looked around the field, but it did not take me long to find the source of the screaming. Not fifty feet away, a man lay on the ground, screaming his head off. I rushed over to his side to find out what was wrong. When I finally pushed my past some soldiers, he came into my full view. My stomach turned over when I realized what was wrong.

The whole lower half of the soldier’s body had been blown off. I could see some of his organs peeking out of the lower half of his body where his legs should have been. It was a miracle he was even still alive. Or maybe not a miracle. A quick death would have been much more merciful than this.

I bent down next to the soldier and placed my hand on his chest. He looked up at me with eyes so full of pain I had to look away. I could feel his whole body trembling under my hand. His heart was beating so fast, but was finally beginning to slow down. The soldier grabbed my hand and I forced myself to once again look into his eyes. In those eyes he implored me. I nodded my head and released his hand. I pulled my gun from my belt and placed it on his temple. Right before I pulled the trigger, I looked into his eyes for the last time. They were relieved.

I pulled the trigger and his body convulsed once and was still. For a long time, I just stared at his body. I waited for that feeling of triumph to wash over me like it usually did when I disposed of a human. But it never came. Instead inside I was horrified at the fate of this poor, brave soldier. I felt sick at the sight of his mangled body. My heart broke at the thought of the family who would never see him again.

I finally stood up and tried to rouse myself. I began to walk away, but I stopped and came back to his side. Leaning down, I gently closed his now sightless eyes. They were blue. 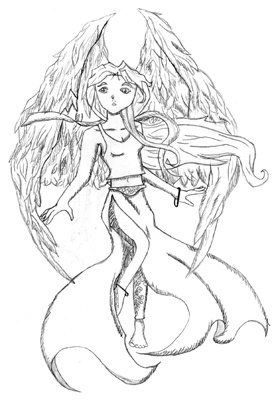 The author's comments:
Short story that could eventually be part of a novel.
Post a comment
Submit your own