Favorite Quote:
You cannot be lonely if you like the person you're alone with. -Wayne Dyer
Leading those who have followed a greater leader without knowing what it is you are doing is the same as wielding a sword against a master of weapons. -Kreepy

When darkness fell, Bael crept into the clan and slunk into the hut where the girl was sleeping. He quickly gagged her and bound her arms. She was very strong but still no match for his demonic strength. The corruption coursed through his body powerfully as he threw her over his back and ran out of the clan with her, heading back to Pyros’ cave.
When he arrived, she was feasting upon a large and rather ugly looking carcass. Seeing his arrival she smiled, exposing her many, many needle-thin razor sharp teeth, “Ahh…you have her…good. You may take the eye...” she used her sii to lift the Ruby Eye and drop it in his hands before pulling the girl towards her and cutting her hand, licking the blood before closing the wound. Instantly Pyros seemed to glow with a new life. She smiled dangerously, “You may take her with you…her people will not want her back and I am sure you could use a friend. Now leave…I will expect you back in a month or two.”
Bael nodded and left, the girl following after him. He took her to his ship and headed back out to sea, battling the powerful storms, the shrieking wind and pounding waves until he reached home again. He was gone a month for this journey and was now safely back home where he belonged.
Along the way he had tried to talk to the girl, getting her name and learning she was a very intelligent and very clever girl. Her name was Derimacheia L. Wolf, though she had said her nickname was Lynx. She was a hybrid, a vampire and a wolf, or rather a werewolf or shape shifter. She proved worthy of something when they arrived back in Zenthus and confronted Demetri together.
“I have done as you asked…now return to me what is rightfully mine...” Bael threw the Ruby Eye to Demetri as he sat on his throne in pure rage and anger. He glared his younger brother down and then turned his eyes to Lynx, surprised at her beauty but still angered nonetheless.
“You think I would ever give you my throne?” he sneered. “You will never have it…and you will never take it from me!” Demetri then lunged at Bael, but before anyone could do anything else; Lynx had a dagger through his heart.
“Learn carefully how to pick your enemies. Be wise in how you confront them, for they may be cleverer than you expect,” Lynx whispered into his ear before he fell to the ground, gurgling blood before dying.
And so it was that Bael reclaimed his kingdom and befriended Lynx most greatly. They stayed friends for many more years to come. It was only after a few years; however, that Bael gave his throne to the very trusted psyche who had started this mess in the first place. She was a wise and loving woman, but strict and unbreakable as well. She would be a wise and kind leader for the people of Zenthus.
Set continued to watch over this small water droplet planet, making sure that his son was safe and happy. It was soon to be Bael's nineteenth birthday...and Set had something specially planned for him. Nylarthotep had a few things to reveal as well, but that is yet another story entirely. 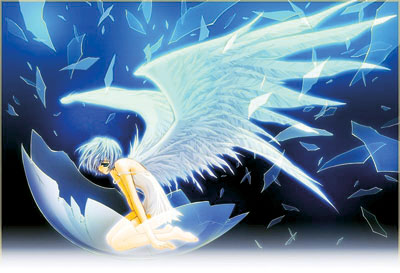 Favorite Quote:
you never know how strong you are until being strong is the only choice you have

View profile
the whole of the short story was very interesting. i usually like hearing more details but this story makes you dream up your own. liked it very much. = )