Wolfbane glared down at his reflection in the water. Ugly. the swift, powerful river distorted his scarred face. He growled at his stupid, ugly wolf face, wincing as he caught sight of his yellow fangs. He hated himself. Deeply. He so deeply resented that stupid, hideous face and those ugly scars. Why? He silenced the voice. Because he was a monster. Because he was wrong, a freak. Good only to be chained up and shown to make money.

He had been young, once. A pup. Happy, enough. For a freak of a werewolf, anyway. It was wrong. For him to be happy. He didn't deserve it. He morphed and became human. Subconsciously, he rubbed his neck. The hole in it, where they had put a chain through his flesh. He remembered, vividly.
He had been playing outside, in wolf form. So strangely happy, free. Chasing a leaf. His mother was in their home, a cave. He was old enough to be allowed out on his own for short periods of time. He was thrilled. Then he heard a rustling. He jumped and turned, play growling. A human with a metal stick walked out into his sight.

Wolfbane wanted to feel free again. He stared down at the rushing current. So free… he wanted to join it. Dispose of the monster in the process. He growled, human, at the face staring up at him. The scars lining his to-aged face. He stared up at the night sky, hate in his gaze. A cloud hid the moon, keeping him human.

“Why?! Why me? What did I ever do?” no response. The silence infuriated him. He picked up a rock and threw it at the sky, but it just fell back and landed in the water, splashing him and further distorting his face.

He went back again, saw the laughing, jeering crowds mocking him, the monster. Felt the gravel sting his eyes as they threw it at him. Tasted the blood of a kid who got close and tried to poke and prod him when he had had enough. He bit. And then they lead him off, holding a gun. He was beyond caring then too. He bit them and ran, but he wasn't free.

He went further back, to when they named him. Like a pet. Like he wasn't human. Like he didn't have a name. Wolfbane. He hated it. It was him. He embraced it. Argh! Why didn't anything make sense?! He felt tears sting a fresh cut as they fell down his face, streaking through the dirt. He ignored them.
The moon came out and he became a wolf again. He looked back at his reflection. Ugly. he stared at his eyes. Red. evil. Like him. His fur was black. Maybe beautiful, if it shined. If it was wild and free and streaming in the wind. Not dull, limp. Black was evil too. He looked back at the current. He knew what it looked like. Freedom.

Wolfbane put in his paw, slowly. He stared at it. The fur flowed in the water, gleaming in the moon. Beautiful. Wild. free. He didn't hesitate with his other paw. Slowly, he walked into the churning current, walked into himself, walked into freedom. Every step felt good until the current was strong and he was deep in, just half of his body above the water. Then he plunged in his face and let go.
The current took Volk, carrying him, denying him breath, pulling him deeper into it. He freely exhaled, giving his life gladly, as himself. As the wolf, the man, the free. 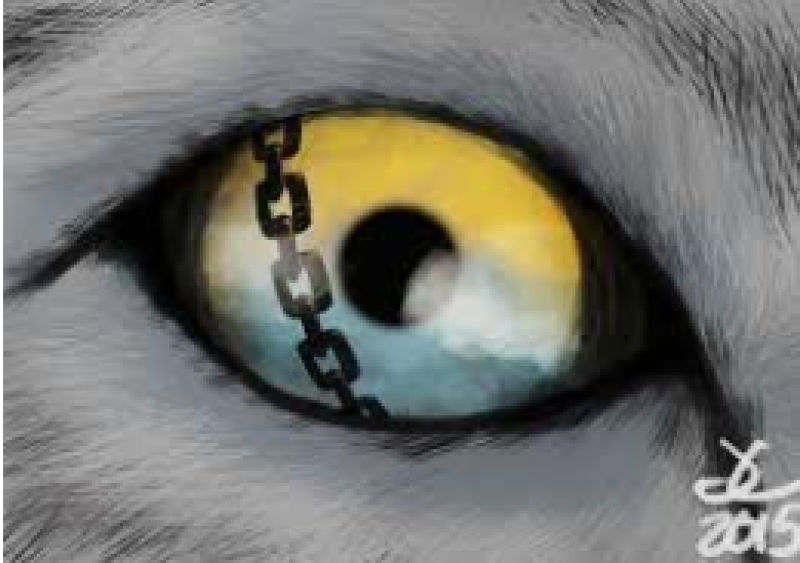 this is a part of something i co-wrote with wolvesrain

we had no clue how to cowrite so we both wrote the same story in our ways and interpretations and then tried to stitch them together and edit that. this is my piece before we merged it.

check out the final product on her account. she titled it Volk: the captive now free