“O to the freaking mg.” Cassie yelped dropping her lunch on the already dirty floor. The janitor gave her the evil eye as he went to fetch the mop. Cassie didn’t seem to notice as she grabbed her friend’s arm, almost making her drop her lunch. “Cassie!” she yelped steading herself. “Sorry but look over to your right, table nine.” she said picking her tray up. Her friend looked over and all she saw was the table that all the skater geeks always sat at. “What?” “Don’t not tell me you don’t see him Taylor?” Cassie asked annoyed. Taylor looked over again and finally saw what Cassie had been gawking at. “You see now.” Cassie said steering her to their table.


“Why is back?” Taylor whispered to Cassie in their History class while they were supposed to be watching a movie. “Like I know. But he has gotten considerable hotter.” Cassie replied smacking her gum and getting a look from their teacher. “I don’t care how hot he has gotten, he shouldn’t be here.” Taylor ended and sat back in her seat in a sulk.


“Taylor!” Cassie screamed running into the art room. Everyone looked at her as she ran to her best friend. “Cassie.” Taylor said looking around, “You will never believe what I just heard.” she said breathless from running. “What?” Taylor asked getting her supplies ready. “He’s in this class.” she whispered with suppressed excitement. “What!?” Taylor yelped dropping her paintbrushes. “He cannot be in this class.” Taylor exclaimed as he walked in. “Well look who we have here. Cassandra and Taylor. Surprisingly everyone but you two have welcomed me back.” he said with a sneer on his face. “Because Roger, unlike those people we are determined not to be fake. As you should know I do not like you so I am very unhappy at you coming back.” Taylor replied coldly. She turned away from him to pick her paintbrushes up. “Deep inside Taylor you are rejoicing at me being back.” he said taking the easel next to her. “I think you want me to say that Roger.” Taylor replied not looking at him. He was about to say something else but was interrupted by the bell. “Okay class continue working on your projects while I help our new student Roger.” their teacher announced walking over to him. Taylor sighed in relief from the distraction the teacher was offering her from talking to Roger.

“Why do you hate him so much?” Cassie asked smacking her gum. They were sitting on their bus about to go home. “It’s a long story I don’t feel like telling.” Taylor said looking out the window. Cassie rolled her eyes but didn’t question her farther. “Hey Tay-Tay.” someone from the front yelled. Taylor flinched at the annoying nickname and looked up to the front. Roger was standing on the seat. He had everyone’s attention and he thought he was hilarious. “Hey Roger, why don’t you go get your teeth clipped again. They’re showing.” Taylor yelled back to everyone’s amazement. Roger smiled and walked to the back. “Say it to my face Taylor.” he said taking the seat next to her. A little sixth grader was already sitting there and was overjoyed at being so close to the action. “Roger, I really would have thought you had grown up but you’re still the immature person you will always be.” Taylor replied instead rolling her eyes. “It’s funny that you call me that after I dumped you.” he said. Everyone looked to the back, hoping for some action on a boring Monday. “To have dumped me, we would of had to gone out and since that never happened that’s not possible.” Taylor said deflating the bubble that he was trying to build.
“Remember Taylor, we did.” he whispered so that only her and Cassie heard. Cassie punched her shoulder, letting her know that this wasn’t over. “Why must you ruin my life?” Taylor replied with a sneer. “I made your life, not ruined it.” he replied softly.
“I cannot believe you dated him.” Cassie said for like the fourth time. They were sitting in Taylor’s room “studying”. “I was young and foolish.” Taylor replied. “He’s hot though and apparently still hot for you.” Cassie said poking her in the shoulder. Taylor rolled her eyes and laid down on her stomach. “I don’t like Roger at all.” she said, more for herself than for Cassie.

“Honey, did you hear?” Taylor’s mom asked her that night after dinner. “What?” she asked. “Roger is back.” her mom replied. Taylor’s breath caught in her throat. How had her mother known? “Yes, he’s in my art class.” Taylor finally choked out. “I remember when yall two were real... close.” her mom said choosing her words carefully. Taylor pursed her lips and nodded her head. She wanted this conversation to be over. “Oh, what ever happened to you guys?” her mother asked? “Mom.” Taylor replied with a warning in her tone. She wasn’t going to talk about this to her mom. “Tay..” her mom started but was interrupted by the phone. Taylor silently thanked God for the distraction. She was halfway upstairs when her mom called her name. “Well that was Fran. She invited us over for cake. You don’t have to talk to me but you do have to talk to Roger.” Taylor sighed but knew there was no way out and ran upstairs to get her shoes.

“So immature.” Roger said smiling at Taylor. She hadn’t spoken one word to him since they had arrived. Their moms had stuck them in the family room with popcorn and a movie. Taylor had rolled her eyes when they had left. Like she didn’t know what they were up to. A piece of popcorn landed in front of Taylor. “I’m the immature one?” Taylor commented sliding farther down until she reached the end of the couch. “You haven’t changed a bit Tay-Tay.” he replied sliding closer. “Actually I have. And don’t call me Tay-Tay.” she said suddenly desperate to prove to him that she was different. She always felt a need to prove herself to him. “If you’ve changed...” Roger grabbed a piece of her hair. “Why do you still wear the same hairstyle?” Taylor flicked her hair out of his hand and looked directly at him for once. “Rogdrick, I am not the same scared lovesick little girl I once was. I have grown up and I’m over you. You were right on the bus. You didn’t ruin my life. You made me stronger.” Roger laughed as if her speech hadn’t affected him at all. “Fine. If you are over me then..” He started then leaned over and kissed her. At first she resisted, then she let her mind wander to the days where they had been a thing. It was some of the happiest days of her life. Then she remembered the god awful breakup and pulled away. “Taylor, I never forgot about you.” Roger whispered grabbing her hand. “I never forgot you either.” Taylor said pulling her hand away. “I never forgot any of it.” 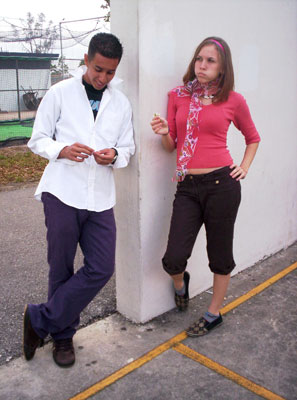