As I walked to the door that day, I thought about what I was doing and where I was going. I thought it obvious I had to go. I wasn't about to let a war stop me from seeing him. I had no doubt in my mind that he loved me, and that I loved him. Not one.
"Where are you going?" asked an all too nosy voice behind me. There had once been a time when that voice was full of respect. Now it was simply suspicion. I knew the owner of that voice. I also knew that she didn't trust me. At all.
"I'm going to tell," the voice persisted.
"Really," I replied, not bothering to turn around.
"I know you're going to see him. You can't, it's not safe."
At that I turned around. "Tell me not what I can and cannot do. You do not care if I live or die.”
"I'm going straight to Rachel-"
"Ha! Her? She can't control me-"
"Father then! I'll not let you-"
But I never did hear the end of Sarah Revere's words. I was already out the door.

It would have been a beautiful day. Even with the constant rounds of gunfire. But my mind was clouded with thoughts of war and how at any moment, Amos could be asked to fight in the war. It was only right. He was old enough, and certainly fit enough. I wondered, if he went, would he survive? No, I told myself. Don’t think of such thoughts. It was easier to scold myself then to actually banish the thoughts. They lingered in the back of my mind at all times.

As I sneaked my way back to my room, I thought of the great time I’d had with Amos. All thoughts of war had vanished. For that matter, thoughts of everything other than Amos had vanished. But that quickly changed as I tiptoed into the room to see my sister waiting up for me.
“So, how was your little outing?” Sarah asked in somewhat sneering way. Yes, that’s right, Sarah Revere’s my sister. My name is Debby Revere.
“Actually, it was marvelous, thanks,” I replied. I was in much too good a mood to let Sarah’s childish antics annoy me.
“Won’t be that way for long,” Sarah said a little too sympathetic for my liking.
I knew I probably should have ignored her. I should have brushed my hair and gone to bed. But I didn’t. The curiosity was too much for me. So instead I asked, “What do you mean?”
Sarah didn’t say anything at first. It was as though she was contemplating whether or not to tell me. That’s what made me suspicious. I didn’t have too much trust in Sarah. “Well,” she started slowly. “It’s just that I happen to have seen Amos. With another girl.”
“And?” I asked, internally sighing my relief. Sarah would say as much. I needn’t be a genius to know that.
“And he was sweet talking to her.”
My immediate response was, “You lie.”
“Cross my heart. I heard him with my own two ears.”
Yes, of course. “No. That’s not possible. Amos would never.”
“Don’t believe me then. But I heard him say where they were planning on meeting next.”
This was much too tempting an offer. I had to get to the bottom of this. “And where, exactly, would that be?”
“The pier, seven o’clock. And if you’re planning on going, I know of a small cave nearby. You would be able to hear his conversation, and then you can judge him however you like.” Sarah finished.
She had a point. Wait, Sarah having a point? No. I think not. I decided that I’d not go. I had to have some faith. So I snapped, “I know how to trust. Maybe you should learn how too.”

But the next day, I somehow found myself sitting in the very cave Sarah had mentioned the night before. I did trust Amos, just not enough to stop me from going. I know, I know, it was invasion of privacy and all that blubber. But did I really think I could just sit around when Amos could be at the pier, sweet talking to another woman?
I hushed my thoughts. I could hear someone on the other side of the cave. It was Amos! Soon, a soft voice joined him. I could barely hear as I pressed my ear to the wall.
“You look lovely.”
“Oh, thank you,” the unknown girl said with a giggle. “And you look handsome in that coat.”
I could hardly believe what I was hearing. Part of me wanted to storm out of that cave and demand Amos tell me what he was thinking, sweet talking to another woman. But the other part of me, a bigger part of me, was too shocked to close my hanging mouth, much less barge into them. It would break my heart more than anything to see them together.
So I sat, and I listened. And after they left, I cried my eyes out. Yes, I, Deborah Revere, was crying over a man. What surprised me was that I wasn’t just angry. I was sadder, more heartbroken. I sat there for a long time. Too long, surly. I should have gotten up and walked away with head held high. But I couldn’t.

“I’m sorry.”
“I’m okay.”
“This is my fault.”
“No. I should be thanking you.” I took a deep breath and turned to Sarah. “Thank you.” I turned away, wishing I had my own bedroom. Sarah took the hint and left he room.

For the next few days, I acted as though everything was normal. On the third day, however, I received a note from him. He had ended it with “love”. How dare he! I wanted do go tell him off, but Sarah told me not to. It was funny how she was talking to me much more these days. She probably felt sorry for me. Still, this sudden change had raised a red flag. But I didn’t see it.

After two weeks of letting Amos’s letters go unanswered, I couldn’t take it anymore. I wrote Amos a note. It said:
Meet me by the barn at midnight.
~Debby
I purposefully made it short, no room for argument. He either came or he didn’t. I secretly hoped he would, I hadn’t seen him in so long! I just wanted to move past this, with or without Amos.

Standing in the moonlight, I waited for Amos. He would show. I knew he would. My perdition came true in a matter of minutes. I let him say the first words. He had some explaining to do. “Debby, what’s been going on with you? One day you’re fine, the next you’re ignoring me. I don’t understand.”
“Well that’s funny. You didn’t think I’d find out? How could you? I thought-” I stopped, then decided to continue. “I thought you loved me.”
“I do Debby, but what’s all this talk about finding out things? How could I have what?”
“You know-“
“No, I don’t know.”
“You’ve been having a lovely time with some other woman, sweet talking to her and everything! That’s what,” I snapped.
“Wait a minute. You mean Cindy?” Hearing her name felt like getting stung by a bee.
“Yes her! How could you have Amos! I trusted you! I lov-,” I stopped abruptly.
“Debby, listen here. I don’t like Cindy. I was only buttering her up for business. It’s hard enough to find buyers these days. Honest, Debby, I don’t like her. How could I when you’re around?”
“You- you mean, it was all an act? All of it?”
“Yes. Cross my heart.”


Amos and I were in the parlor of our city estate when Paul came. Said he had big news. He said, “Sarah’s going to be married!” At first, I wondered why he was telling me this. After all, she had been the reason I nearly ended things with Amos. But that was a different me. That was Debby Revere. Now I was Debby Lincoln, and proud of it. “You’re going to attend, aren’t you?” Paul persisted, and I wondered if I was. This was the new Debby, after-all. And anything is possible when your name is Debby Lincoln. Cross my heart. 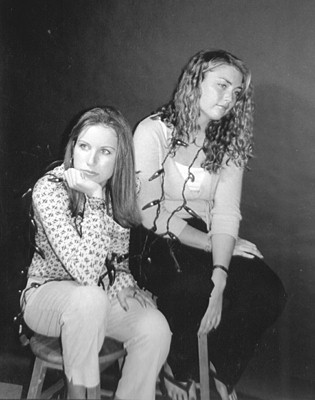 The author's comments:
The characters are from a book caled 'The Secret of Sarah Revere'
Post a comment
Submit your own

Favorite Quote:
everyone is the same in a different way

View profile
i think you are a very good writer...can you give me some advice, please? i would love to hear from you. thanks if you do,if not is okay