“That was,” Matt paused, “something.”
“Something out of a horror movie.” We both laughed at my joke. “But really; I met your parents. That is a big step in any relationship.”
“Parent.” He corrected me, Matt really didn’t like his stepfather. “And Sadie set it up, I didn’t just introduce you.” It seemed like if Aunt Sadie hadn’t arranged this, I never would’ve met his parents. Matt didn’t seem to care whether I knew them or not. It wasn’t supposed to be like that. But I had already met his parents, so there was no need to worry about it now.
“Speaking of family, where was your brother?’
“Who knows?” Then added under his breath, “The little dorky kid.”
His use of the word ‘kid’ didn’t sound like the fun and playful way you talked to your younger cousin. He acted as if Josh was an actual kid. A kid older than me. “So, if he’s a kid, what’s that make me?”
He just looked at me, a straight and serious face. “You’re my girlfriend.” That didn’t answer the question. He hadn’t really answered any of my questions that night.
“Enough family stuff,” Matt told me, “Who cares if you babbled and said all the wrong things in front of my parents causing them to look at you like you had two heads. It doesn’t matter. You are my, not their, girlfriend. My girlfriend.”
“At least Aunt Sadie likes you.”
“Yeah.” Matt had my hand and making small circles with his thumb on the back of it.
“Mmm-hmm. Uncle Mike, too.”
“You’re mine, and that’s all that matters. You. Are. Mine.” Matt looked straight into my eyes and gave me the sweetest kiss. 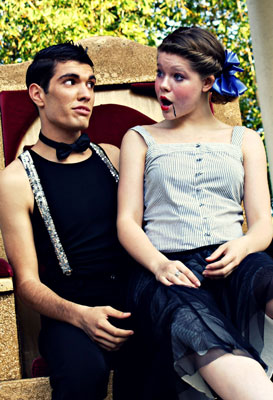 The author's comments:
This really didn't fit into Chapter 5, so I added it to four and made it part three. Enjoy. :)
Post a comment
Submit your own

View profile
Thank you so much! I love all the help I can get!!! :)
winterdrifts SILVER said...
on Jul. 7 2010 at 11:40 am
winterdrifts SILVER, Wilton, Connecticut
5 articles 0 photos 7 comments
View profile
WOW. i really liked the story...i felt like i really got to know the characters (Corey from the beginning was funny haha) and your writing has great voice. the only thing you might want to work on is making your writing a bit more formal...but please keep the "diary" aspect of it because that was really good :)...but as the story progressed i could see your writing improving.  anyways, i loved it and you DEFINITELY have talent!!
taylorf463 GOLD said...
on Jul. 5 2010 at 11:35 pm
taylorf463 GOLD, Marion, Kentucky
13 articles 0 photos 152 comments

View profile
I will! It may be a while because I haven't gotten them subitted yet! lol :)
TheReader SILVER said...
on Jul. 5 2010 at 1:11 pm
TheReader SILVER, Avon, Colorado
8 articles 0 photos 42 comments

Favorite Quote:
"Go for whatever you want, even if your friends aren't backing you up. "

View profile
This is really good! I can't wait till the next chapters! Let me know when they are up!