Blinding white, the snow fell upon the dark foreboding trees silhouetted against the gray sky. I kept walking, my feet leaving marks in the previously untouched snow. My cheeks were red, the wind continuing to lash mercilessly like tiny whips. I looked behind me, but I couldn’t see them anymore. I was trapped in a whirlwind of white. They probably didn’t know I was gone yet. I kept blindly stumbling through the forest until the snow stopped. I was at a roadside, completely deserted and unplowed. There was a gas station across the road, covered in a blanket of snowy velvet trimmed with icicle lace. I had no hope of finding anyone there, but it was a place to rest. I curled up next a pole and fell asleep.
I woke up in an unfamiliar place. I was on a bed, a metal bed with crisp white sheets and blank white walls. A hospital, I thought when I came to my full senses. I’m in a hospital, but why? I’m not hurt am I? Sick? Just then a familiar face peeked into my room.
“Hi,” my little sister Mady chirped, climbing at sitting at the foot of my bed. “You’re okay, you know. You ran away when the car broke down and they found you at the gas station. The doctor said you had hyper- hypo-hypi-…”
“Hypothermia?” I guessed.
“Yeah, that. But you’re all better now. But you still might be in trouble ‘cause you ran away.”
“I was trying to get help…” I started, but Mady cut me off.
“Well, we got help from the shiny guy. Now you’re supposed to rest. Bye!”
“The shiny g-“ I began.
Mady giggled as she ran away. I snuggled under the thin white sheets. The slightly creased sheets looked like small hills blanketed in snow.
---
It was going to be a white Christmas. The snow was only softly falling now, but by the time I got home, the blizzard would have started. The wind howled in the distance. Lost in my thoughts, my tire slipped on the ice, and the car went spinning. I don’t remember if I screamed, it felt like a dream. All I could see was blinding white. The car stopped, and I cautiously pushed open my door. The car was on an angle, half sunken into a snow bank. Seven years before, I had walked the long white expanse ahead of me, in search of help. I was eleven then, and didn’t even think that Mom and Dad could have used their cell phones. I dug for my own phone in my pocket, but it was frozen. I frowned and began to walk the expanse.
The trees were no longer there. In their place a hedge, with a pile of snow atop it, like icing on a cake. I stopped when I came to the hedge. A house stood where the forest once did. I ran to the door as fast as one in heels could run through snow. I slammed myself at the door, my ungloved hands to numb to knock. No one answered. With a quick glance at the gas station across the street, I knew it was deserted again. I trudged back to the car. I probably wouldn’t be able to push it out of the drift, but it was worth a try.
When I got back to the car, the snow had stopped. I could plainly see the car was not in the drift anymore. Two men had pushed it out. The first got back into his pickup.
“Thank you!” I called, waving to him. He nodded at me in a ‘You’re Welcome.’ way. The other man seemed to be encircled by light. He gave me a wave and sort of faded away before I could thank him. My breath caught.
The shiny guy. 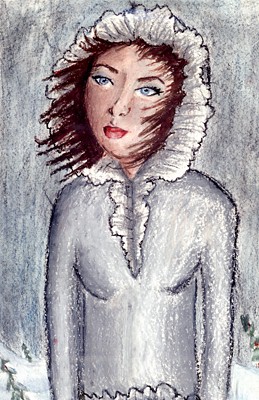 The author's comments:
The first half of this story is the main character (Nina)and her family on the way to a skiing trip. Their car breaks down and eleven-year-old Nina goes to find help. The second part features an eighteen-year-old Nina on the way home from college on holiday break.
Post a comment
Submit your own