This Time I'm Sure | Teen Ink

This Time I'm Sure

I bend down to tie my shoe. Students rush by, barely noticing me. But I notice them. I’ve always been an observer, very chameleon-like the way I fade into the background. I’m also very bookish. It might come naturally, since I’ve always been painfully shy. I discovered the way to avoid being scared of large crowd is to read and ignore them.

When I was two, my little sister was born. I didn’t understand who this strange new person was, but mainly I stayed out of her way. I would stand calmly by my plastic Kiddie Kooker Kitchen and watch Ellie roll around on her play mat, giggling happily to herself.

I stand up again, and head over to my locker. I hum a happy tune as I turn the dial to my combination. I’ve managed to lead a happy life, despite the fact that I have very few friends. I calmly look on as a group of friends passes by me, laughing at something that isn’t even remotely funny.
Inside joke I guess.

When I was five, kindergarten started. I played by myself, mostly, unless I was reading. I loved to read.
One day I was perfecting my block city. I had spent the last hour planning it. It was a beautiful city, and I stood there staring at it in wonder.
Of course it was knocked over by the stampede of kids when the bell rang.

“Yes! The final bell!” a guy shouts from behind me. He’s the linebacker for the football team. Suddenly a mass of kids eager to end the school day seem to come out of nowhere, pulling me along in their forceful current.
“Ow!” I cry, collapsing on the orange and black tile floor of the hallway. My books fly out of my arms and slide away.

“Are you okay, Emily?” Mom asked, entering the room. I glanced up from my book, Pride and Prejudice. I was only eight years old, but reading old classic novels gave me a thrill.”I’m taking Ellie to her friend’s house to swim in their pool. You’re invited too. Are you coming?”
I glanced down at the book and back at Mom. Normally I would decline the offer, but it was an extremely hot day, so I supposed it wouldn’t hurt to cool off a bit.

“Are you okay?” two pairs of eyes are staring down at me. One pair blue, the other brown.
“Um, yeah.” I said, blushing as I picked myself up off the floor. As I brush myself off, I take notice of the two people. A girl and a guy. The girl has thick brown hair that falls to her waist, so different from my own thin stringy blonde hair. The girl’s deep blue eyes sparkle as she extends her hand.
“I’m Lia and this is my brother Trevor.” She says, nodding toward her brother, who looks nothing like her.
Trevor has brown eyes-or hazel? I can’t really tell the way the light is. He has wavy blond hair, thick like his sister’s. He is holding my runaway books.
“I’m Emily.” I say, smiling as Trevor hands me my books.
“Well Emily, do you have any plans after school?” Lia inquires. I shake my head, this is the truth unless you count homework.
“Cool,” Trevor says. “The baseball game today is against the Hornets. I’m starting pitcher. You wanna come?”
I nod, it wouldn’t hurt to check it out.
“You can sit with me.” Lia announces happily.

Nervously I stepped into the crowded gymnasium, tugging at the too-short dress Ellie had loaned me. She had a sense of style and I didn’t.
I didn’t know why I had let Ellie talk me into going to the first middle school dance. She was only in 4th grade then, what did she know? I plopped down on a folding chair with an unbelievably cold seat. After getting comfortable, I reached into my bag and retrieved my book.
“Did you have fun at the dance?” my Mom would ask me,
“Yes.” I would reply, and it would be the truth as long as I had a book.

Lia leads me to the crowded field, where we have to wedge in to fit on the bleachers together.
“Did the game start?” I ask. Lia gives me a weird look.
“No of course not, they’re still warming up.” She replies.
“Oh.” I pull my book out of my bag, but Lia swats it out of my hand.
“The game’s about to start.” She tells me. “Relax.”

“You’ll be fine, Emily.” This girl named Margaret told me. I was sure I was going to have a heart attack due to the facts that a: My family talked me into trying out for the 8th grade musical and I actually got a part, and b: This is the warmest palm tree costume ever known to man.
“I might pass out…” I croaked , stumbling toward the stage. Palm Tree 2 wasn’t exactly a glamorous role, but it worked for me, because it wasn’t a speaking role and all I had to do was wave my arms in the background of the opening and closing numbers.
When the curtain went up, the stage came alive. I almost forgot to wave my arms it was so beautiful.

I sit rigidly on the bleachers trying to make out what is happening between each play. It all happens so fast, though I lose track. However, the Hornets have an amazing team, and I almost clap for them because they play so well. Not to say Trevor and his tea m don’t play well, but the Hornets play beautifully. Suddenly, a guy on the Tigers (our team) hits a two run homer! (At least, that’s what Lia told me when I asked why she had yanked me to my feet and ordered me to clap.) The game continues with the Tigers in the lead.

“Emily, you’re hyperventilating.” Ellie told me, handing me a glass of water. “Calm down.”
“You would be hyperventilating too, if you were starting high school. But you’re starting 7th grade, and there’s nothing to worry about there.”
Ellie raised an eyebrow, and I vaguely remembered hyperventilating on the first day of 7th grade.
“Yeah, but that was me.” I admit. “Not you.”
“That’s true, but quit worrying. I’m sure you’ll love it.”
I wasn’t so sure.

“Yes!” Trevor pumps his arm in the air. “Victory!” he turns to Lia. “Tyler is having the team over for a party at his house. We can bring people along. Wanna come?”
“Sure!” says Lia grinning. “Emily can come too.”
“But-“ I begin, but Lia cuts me off.
“You’ll love it. I’m sure!”
I think for a moment then grin.

This time I was sure. 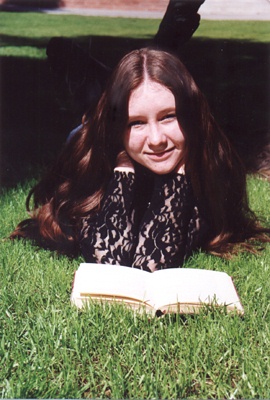 Favorite Quote:
'There was no need to clarify my finger snap, the implication was clear in the snap itself' - Magnus Bane

View profile
Wow! I really liked this. Emily is very releatable, and I loved the first paragraph, it really helped me understand the sort of person she was. The structure of this story was great, adding events from her past really made her seem more real. Great story and well written, and the characters seem very well developed