Sweat dripped down her back as she raced down the track. She felt her new running shoes slap the beaten dirt track. She focused on it. She drowned out the cheering of family and friends and just focused on her footsteps. Slap, slap was all she heard as she passed the person she used to be neck and neck with. She heard, felt the person gasp but she soon drowned out that too and went back to her footsteps. Then she heard something else mixed in with her footsteps. It was soft, barely audible, a clinking sound. She heard it again. It was ruining her concentration, sounds of the crowd were leaking in like she forgot to fully turn the facet off. First it was the sound of a baby crying, and then change as someone dropped it on the bleachers. Her speed slowed and again she was neck and neck with her competitor. She gritted her teeth and tried to focus on her footsteps again. The sound was there again every time she found her concentration. She looked down in desperation and finally saw the source of the problem. Her shoe was untied and the tip of the shoe lace was dragging across the ground making a clinking noise every time it hit the side of her shoe. She looked back up and tried to find something else to concentrate on and soon. She saw the finish line and her competitor was gaining speed. She could feel the extra dust hitting her bare leg. The sun beat down on her neck as she scrambled to find a new point of interest. The crowd was almost unbearable, cheering and making more noise than should be allowed. They were all chanting different things but to her all they were chanting was, “Win, win, win!” She swallowed the saliva that was beginning to collect in her mouth. The finish line was now in view and it was approaching faster than she thought possible. She cried out as the person fully passed her. She forgot about focusing and just threw herself fully into just running. She soon caught up with the person and the finish line was just in front of them when she didn’t hear her feet on the track anymore. She didn’t even feel the ground until she landed on her stomach one inch from the finish line. The air rushed out of her lungs and out of her mouth into the air. She heard the crowd’s cheers mixed into the boos and the ahhs. She picked herself off the ground and slowly walked across the finish line to her coach who was kneeling on the ground. “Coach.” She said sadly. He looked up at her with his tired wrinkled eyes and said, “Get out of bed you lazy girl.”
Jamie woke with a start, tangled in her sheets and sweat dripping off her forehead. “What?” she asked dumbly not fully awake. Her mom yanked the covers off of her, twisting her legs and making her jump up. “You are late.” Her mother said disapprovingly. “Sorry mom.” She replied finally understanding her rude awaking. Her mother huffed and shook her head. “Hurry.” She said then walked out the room. Jamie sat back on her bed thinking about her still fresh vivid dream. She had just cost her school the championships and worst she had lost because she had tripped. She looked at her calendar across the room and almost fainted. It was the day after the championships. She had tripped. She had cost them the championships. 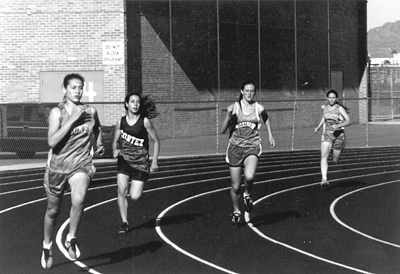 The author's comments:
This is just how I would feel if this ever happened to me:)
Post a comment
Submit your own

Favorite Quote:
Due onto others as you wish others to do onto you.