I walked along the beach barefoot, with my white summer skirt heavily stained with sand and my hair woven with tangles from the ocean breeze. It was a nice day. I walked the shoreline, where the sand was constantly flooded with water, and where the newest and most exotic shells drifted their way to land. Today’s finds hadn’t been at all impressive. A few fractured conches, cracked scallop shells, and a handful of stained but smooth pebbles. A few surfers who were catching evening waves called to me. I nodded in their direction, but I doubt they saw my gesture from their distance. I wasn’t really in a talking mood, anyway.
I knelt down and sat in the sand, with the expectant hope of some sort of sea treasure washing up right before my feet. I drew in the sand, waiting for the gem to catch my eye. It didn’t. The waves just lapped lazily against the shore, taking a layer of sand with every ebb and flow. Eventually it revealed a legion of baby clams, the largest no bigger than my little finger’s nail. They pushed themselves up vertically, and then buried down into the sand, all praying they wouldn’t be swept away with the tide. Looking closely, I could see small slivers of muscle emerging from the edges of their shells, digging in the sand, forgoing their primary protection so they could burrow away into yet another layer of armor. I could relate.
I picked one up. It was a pretty lavender, with white edges. But the moment my fingers brushed its exterior it snapped its tentacle back into the shell. I felt my brow knit with frustration, but then my features softened into reluctant understanding. I wasn’t really a fan of lying in someone’s hand, fully exposed either. Sitting there, lonely in my hand, it looked no more special than one of my common beach pebbles. There was something inside, despite whatever the exterior betrayed. I was sure of it. I’d seen it, just a second ago.
A little girl, no more than seven, approached me from behind while I was musing over the clamshell. She wore classic pigtails and a bright pink flowery bathing suit, which reminded me of one I’d owned as a child. She splashed into the shallows of the water, a small pail in hand. “That’s a pretty rock!” she said enthusiastically, and waved her little pail as high as she could manage, “I have a whole bucket full of them!” And then pranced away. 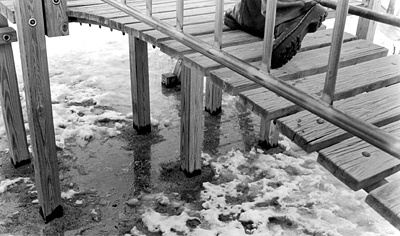 The author's comments:
The walls we put up create both safety and loneliness.
Post a comment
Submit your own