Favorite Quote:
Be who you are and say what you feel, because those who mind don\'t matter and those who matter don\'t mind.

The speaker on the left side of the backseat of Nora’s blue Bug pressed into my leg. I ignored it and continued scrolling through the list of songs on my iPod, trying to find one that would be suitable to play. Everything seemed to have something wrong with it. Too metal. Too folk. Too electronic. Nothing was acceptable.


“Will you hurry up?” I heard Bree command from the passenger seat.


I mumbled my agreement and continued my work, the speaker still pressing into my leg. I was always stuck in the backseat because I was “too short” and “small enough to fit back there,” while everyone else got the prestigious passenger seat.


“Let me see,” James, who sat to my right, said, poking my arm. He reached for the iPod and I snatched it away, as I did with everything around him. My possessions. My ideas. My feelings. He was too eager, always needing something new to touch or look at or think about.


“Hold on,” I said sharply, squinting at the slightly too-dim screen as I pressed play.


Guitar chords resonated throughout the interior of the Bug, and a fast-paced rock song began. The four of us sang and laughed, momentarily living as our rock star alter egos.


Car rides with Nora were often like this. No matter who rode with us, we were loud, happy-looking from the outside view. On closer inspection, though, there were cracks in our mask of perfection, cracks that grew larger every day. Lies and rumors spread like wildfires through our little group, tearing us apart. It was like trying to pull apart taffy: slow and difficult, as we tried our hardest to hold on.


Nora was one of the worst. We were all to blame, but much of our troubles originated with her. All the sneaking around and the conflicting stories were too much to handle. Every time she picked up her phone, we wondered who she was texting, what the message said. We suspected some things. We knew other things for sure. Her secretive and smug smiles, always directed towards the same person, held more than the smirks of someone as typically two-dimensional as she was should ever hold.


The rest of us had our own issues. Long-standing bonds were breaking. Newly-formed friendships were blessings and curses, treading upon those that had been around for much longer. Feelings were being confused with one another. Jealousy ran rampant. We were all hurting.


“Pick a new song,” I heard Nora’s command from the driver’s seat. “And make it a good one.


I was drawn from my pensive state of mind by James’s hand reaching for the iPod.


“Will you chill for two seconds?” I snapped, practically shouting. I mumbled a quick “Sorry,” keeping my head down and my gaze focused on the tips of my Converse.


I scrolled through the list and picked a song. The keys of a piano twinkled before making an unexpected segue into a throbbing drum beat and we began singing again. I could still feel the speaker pressing into my leg. It would surely leave a mark when I got out. For now, though, my only job was to smile, sing, and play the part of the happy girl in the backseat of the blue Bug. 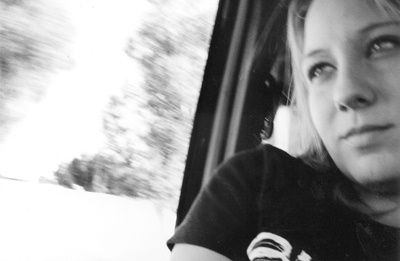 The author's comments:
The prompt was to choose five of our friends and describe them. We were then told to choose at least three and write a story using their personalities. My piece was the only negative one...

The friend that was the inspiration for Nora and owns the blue Bug actually read the story and didn't understand the metaphor, telling me how much she loved the piece.
Post a comment
Submit your own