The Price of Silence | Teen Ink

The Price of Silence

Favorite Quote:
...one word from you will silence me forever. If, however, your feelings have changed, I will have to tell you: you have bewitched me, body and soul, and I love....I love...I love you. I never wish to be parted from you from this day on. -Mr. Darcy

The man sat in front of the TV, the dim glow bouncing off the cold beer he was sipping. It had been a long day at work, and all he really wanted was a few hours to himself. He stretched his neck, kneading at the knots buried deep.

“Daddy?” A meek voice came from a tiny pajama-clad figure next to the TV’s bluish aura.

No response. A pounding pressure throbbed in the back of his skull.

“Daddy?” The pajama-clad figure was a bit louder now. He positioned himself in front of his father, his miniature hands placed defiantly on his miniature hips.

No response. A searing pain replaced the dull throbs, and the man gritted his teeth.

“Daddy, I think you hurt Mommy’s feelings. She won’t stop crying.” His father waved him away, an unfocused light in his eyes.

“Look at me!” The pajama-clad figure was blocking the gleam of the TV, his voice a high, reedy whine.

“Get out of the way, brat,” he growled, pushing his son to the ground.

A tear slipped down the pajama-clad figure’s cheek.

And then silence. Finally. 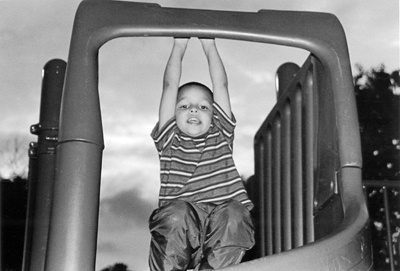 This article has 22 comments.

Favorite Quote:
Washington Irving once said “There is sacredness in tears. They are not the mark of weakness, but of power. They are messengers of overwhelming grief and of unspeakable love.”

View profile
i have to admit that flash fiction is definatly ur thing:) sweet, short and simple:) nice:)
JoPepper PLATINUM said...
on Jun. 16 2011 at 11:43 am
JoPepper PLATINUM, Annandale, Virginia
35 articles 0 photos 782 comments

Favorite Quote:
"Freedom is the ability to not care what the other person thinks."

"Not all those who wander are lost" --JRR Tolkien

"When you are listening to music it is better to cover your eyes than your ears." --Jose' Bergamin

View profile
That was really good!  Was he a drunk?  Good job!!!