Favorite Quote:
"All art is quite useless." -Oscar Wilde

The moment the music began, snowflakes moved to fill the windows.
It was a clever accent for nervous young performers whose anxious hearts beat alongside the rugged music. She ended with a b-girl freeze, body twisting exotically up in the air. Finished in four minutes and twenty-two seconds.

As she exited the building and met the snowflakes, beady eyes followed her out the door.

“Gauge Leviathan. Marvelous talent. But a bit too stiff in the eyes.”

Her peers didn't quite understand why she auditioned for Lamia Inc. The company was notorious for grueling training. And it wanted to charge her right through it.

Gauge quietly said good-bye to her friends, companions, and associates, with her older brother's arms wrapped around her shoulders. They sat in their acclaimed circular booth, gripping honey tea in their hands.

“Let's see the memo one more time,” they all said. They were more her brother's friends than hers, but she liked them well enough. So she showed it to them.

“What does it mean?” they all wondered. They all said it differently, with different accents and tones and some swearing thrown in here and there, but Gauge shrugged them all off in the same way. It wasn't that she didn't have a normal schedule with normal dates and normal, clear-cut duties. This particular memo came in as an add-on in the mail one day, and she kept it.

“It's probably nothing to worry about,” Ace, her brother, said, words smothered by his mug. The world was nothing to him, but he was everything to the world. If he said everything would go smoothly, then damn straight that's how it would go.

She&#39d been wasting the last hour on a park bench, the only one with the luck to be basked in sunlight. In the middle of a symphonic metal chorus, the memo disappeared from her thoughts and the single word anger filled her brain. She went into a mad scramble for the one perfect song on her iPod, and after listening to it three times and breathing slowly with her eyes closed, she got it.

At 10:26 she was in the building, examining her map with a heavily drawn red circle around room 656.

Beady eyes watched as Gauge slipped into the room and shut the door. The dance floor was in the center, surrounded by carpets and tiles and wallpaper. Heavy curtains covered the windows. Spotlights replaced the sun.

“Have you come prepared?”

There she was. Gauge didn't know what to make of her, merely: This must be The Teacher.

She nodded haltingly, wondering what to do with herself, then plugged her iPod into the speakers. No one needed to tell her to press play.

The Teacher wanted anger. Gauge was set on giving it to her. She could feel it screaming through her veins too, because the song was perfect and the lighting was harsh, until The Teacher paused the music.

“Does anger mean violence?” she asked mid-leap. Now that Gauge was forced to stop, she didn't know how to continue.

As the silence limped forward, Gauge finally chose to answer, “I think it does.”

“These private appointments are not mandatory to your training,” The Teacher went on mercilessly. “Should you feel disinclined to learn, I see no need to waste my time.”

With that, she cast a sidelong, careless glance. Gauge decided she refused to go near the door.

“What does anger mean?” she asked.

For the first time, The Teacher showed hints of a smile. “It is not the actual action, nor is it the hunger. It is the fire that fuels those. Start over. What you have is satisfactory, but I want to see the energy flowing through your limbs, not mere movement.”

That night, Gauge must have seemed off, because before she turned off her bedroom lights Ace appeared in the hallway asking, “You okay?”

Ace relied on her the same way she relied on him. So of course he smiled with relief and said, “Got time to help me with my paper?”

They wrote about the hypocrisy of human nature, throwing words together in whatever way they saw fit. That night, she dreamed of fire. Dark green like the carpet in room 656. Chasing the Greeks to war against the Trojans. A burn of everlasting anger.

“Are you always this serious, or do I have the sole privilege of seeing a stone face staring at me when a true entertainer should be in her place?”

She had paused, frozen on the floor this time, suddenly recalling the time Ace whispered to her: “You kind of have this mean look on your face all the time.” Gauge hated accidents.

“You think anger and rejection are related? Anger is motivation. Rejection is a deeper concept. Think carefully. You are an outcast. Love, camaraderie, warmth – they've all been taken from you. Do you plan to write this down?”

Gauge began to shake her head, then nodded.

“That won't do you any good, will it? You can't just think; you must feel.”

The appointments went on. They did not get any easier, merely more enjoyable.

After a month of meeting The Teacher, Gauge felt like a veteran. She lived like a reincarnation of her previous self, far away from the miserable little shadow who had not known what to do with the extra hours of the day. She began to feel like the genius she was acclaimed to be. And then, [10:30 a.m.] Private appointment with The Teacher: Love.

Gauge went to take a hot shower after receiving this memo. Sitting naked on the white porcelain, she allowed the water to turn cold, and remained there for half an hour until she heard pounding on the door, Ace's voice demanding entry to the toilet. She wished she could have stayed there, drowning under the pressure from the shower head and thinking: What should I do? What should I do?

The morning of the appointment Gauge awoke with a high fever. She lay in bed alone the entire day worrying, because truth to be told, she was only ­sixteen.

She did not go to the appointment.

The Teacher did not send her another memo. 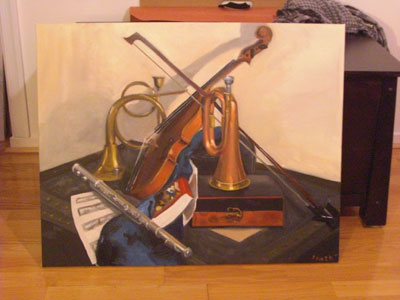 The author's comments:
Strong, clever, and determined, Gauge is one of my favorite original characters. But her downfall is her detachment from everyone around her.
Post a comment
Submit your own