This is what happens when my family tries to have dinner

To begin with, my family isn’t just weird and they’re not only strange, but completely and entirely annoying. Harsh? Maybe, but they’ve been on my last nerve for past sixteen years. After that long it can be a hard thing to get over.
“Mouse!” My ears perk up from the safety under my bed.
When the voice calls for me again, I pray to anyone on some weird unearthly plain who is listening that my family doesn’t find me, that maybe this one night those people can function without giving me an aneurism.
There are sounds of stumbling and feet stampeding about in the hallway. My eyes watch two tiny feet waddle across my floor, calling out my name again, “Mouse?”
By the way, my name isn’t “Mouse.” I actually do have a name, a very nice name, however I was cursed with that horrid nickname after being born with a tiny head and ears trying to eat it.
The little feet stalk with ease around my room, filling my stomach with vomit inducing anticipation, until the feet’s whole body collapses to the floor and I’m face to face with my father’s cousin Moritz, a little person with more facial hair on his face than my entire pubescent body.
“I found him!” He shrieks with some accent and I groan pitifully and hit my head against the floor. I’ve stopped asking where his accent’s from, every time I do, he follows me hours later until I’m at his height so he can flick my ear. Not that it hurt, the whole thing just freaked me out.
My mother’s voice booms from the first floor “Well bring him!”
“Yes maim!” He sounds off like a soldier, while his beady little eyes slink over to me and his mouth grins wickedly.
“Oh no-!” Is all I’m able to spout, before he grabs me by the ear and starts dragging me across the floor as I kick and scream, “THIS IS COMPLETELY UNNECESSARY!!!”
From the midget’s amazing strength, I find myself at the dinner table next to Brando, the narcoleptic old guy who came with my aunt Evelyn’s husband Fernando, who isn’t exactly sure where he’s from and on my other side is their son Angus, a blonde little eight year old. Across from me are my elder siblings, Piper and Emerson, and my parents. Evelyn and Fernando sit by their son, while Moritz and Gran-Gran sit at the ends.
See, there are just so many people, they don’t need me. With ease, I lightly lift my body to ready myself for a quick get-away, but Piper kindly acknowledges me, “C’mon Mousey sit. Stay awhile.” Her black lipstick stain lips curl and I push my sarcastic smile for her pleaser and sit down.
“I don’t see why you want to stay in your room all day,” Mom comments, standing up, probably to go get the food.
“She’s right,” Fernando joins in, his voice like a Spanish singer; with each word he serenades the air. “Life is too lovely for a young man to be cooped up in one tiny space.”
“Hey,” Emerson snorts, “I had a lot of fun alone in my room.”
Rolling her eyes, Piper grunts “You’re disgusting.”

“Disgusting!” Angus gushes, throwing his hands in the air, making Piper laugh, though his mother snaps for his silence.
“I don’t get it,” Gran-Gran mentions clueless to the conversation, although that’s actually normal, which makes Emerson feel the need to say, “Well you know Gran.” He only motions her, but her expression didn’t change, so he decided to do an obscene gesture with his hand and his crotch.
Instantly the whole table is in an uproar, nagging and barking at him while Angus copies him and Evelyn slaps his hand, while I could only sigh, “Oh Emerson, really?”
The whole table buzzes, even Mom joins in when she sees everyone arguing, which means—in her mind—everyone is trying to mess up her dinner, so she starts yelling.
This is why this family can’t enjoy a normal dinner together. We haven’t even been sitting down for five minutes and we’re already at each other’s throats, no I shouldn’t say that. One Christmas dinner Moritz literally had a knife to Fernando’s throat, while he had one to Piper who pointed a fork at Brando and in her defense, he was holding a gun… no one knows where he got it.
But the point is, this just isn’t a family. It’s a mad house. Now, it doesn’t make me happy to say that or even think that. I’m just realistic… if I’m not being realistic, I can only gaze around this table of people throwing their anger back and forth, and feel lonely. I rather be pragmatic than sad.
“THE TURNIPS WILL DESTROY US ALL!!”
Everyone becomes silent; our eyes fix upon Brando who made the outburst.
We only watch him fall back down and smack his head on the table to snore back into his slumber. Dad is the first to recover by saying, as a joke “And let that be a lesson to you.”
Some of us chuckle awkwardly, before relaxing into our seats, letting Mom pass out the spaghetti. The warm smell of the sweet Italian sauce drifts through the room and into our bodies. It fills my chest as I inhale and I can only exhale with a smile.
The others seem to react the same way, almost planting their heads face first into their plates, unfortunately we’re stopped by Gran, “Wait! We must say grace.”
“What?” Emerson whines, looking around the room for back up. “Do you see anyone religious here?”
“Emerson if you’re so passionate about it, why don’t you say grace?” Dad raises, giving out his stern voice that no one can argue with.
Getting heated, Emersion retorts disdainfully “Fine.”
We all bow our heads and cross our fingers, waiting for Emerson’s pray. It’s funny how I just knew this was coming. The grin in my brother’s voice only dug his grave, “Good bread, good meat, good God let’s eat.”
Pop!
My eyes snapped up to Gran swatting Emerson in the head, which made him shrilly yelp and instinctively retract away from her and hold his head. “Ow Gran!”
“What disgusting behavior!” Gran hollered, hitting him again, but in the arm.
Right as the table almost began another uproar, little Angus grabbed a handful of spaghetti and tossed it in the air, smiling “Disgusting!”
The spaghetti hit everyone on the other side of the table and after that it was chaos. Piper threw her spaghetti at him and everyone else joined in, launching noodles and more noodles into the air, finding their way on everyone, the floor, the table and even me.
Feeling a meat ball roll down my face, I sigh under all the shouting, suddenly feeling tired. Lately I find I’m losing the ability to get angry and fight them, now all I can do is get tired. So I pick up my plate and utensils without speaking a word. My feet drag along the carpet before I get to the stairs, where upon I hear Brando scream, “ITS MY FACE I SWEAR!”
“Pfft!” I chuckle unconsciously and can hear other laughs in the dining room…
Okay, so they’re weird and strange and really, really, really annoying, but they try… in their heads, I bet they think the same way I do and just know everything was going to end in a catastrophe, but they still went in there and made the effort.
Maybe that’s what I need to do.
Sighing the last of my frustration, I smile, holding my plate up and run their way, hollering my battle cry to hurtle my own food at Moritz and to have them throw food at me.
So dinner ended with food everywhere but our stomachs…
This is what happens when my family tries to have dinner. 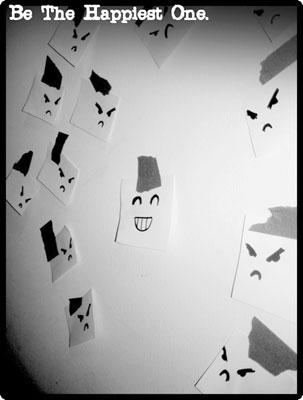 The author's comments:
I hope people will just enjoy this. This isn't made to be serious, but something that will make you ask, "What in the world?"
Post a comment
Submit your own

But that's not really my house. These are just made up people, but I completely agree XD

Favorite Quote:
John 3:16
For God so loved the world that he gave his one and only son so whoever believes in hill will not die but have eternal life.

View profile
I love this story! It has a great comedic timing and plot line, I LOVED the ending. The only thing was, it was a little longer then I liked for it's witty comedic nature. But other wise I was just thinking: What in the world?. I hope you never bring a date to your house.
SomeChick. said...
on Jan. 3 2011 at 7:43 pm
This was so funny! And I was so excited to read about those really weird characters. I love stuff like that XD
Just.A.Dream SILVER said...
on Nov. 4 2010 at 2:36 pm
Just.A.Dream SILVER, Lake Geneva, Wisconsin
7 articles 0 photos 430 comments

Favorite Quote:
We all have dark secrets, just no one knows them.- Me
"If you love something, let it go. If it comes back to you, its yours forever. If it dosent, then it was never meant to be."-unknown

View profile
this is good i am so used to a girls point of view that i was about to stop reading it knowing what my brothers say and do but i was hooked very good job i look forward to more of your work in the future
Auburn-Morrow PLATINUM said...
on Oct. 14 2010 at 6:31 pm
Auburn-Morrow PLATINUM, Canton, Georgia
22 articles 0 photos 19 comments

View profile
Actually I'm working on "This is what happens when my family goesto the supermarket" lol. And thank you, I'm really happy you enjoyed it~
Tayrodactyl PLATINUM said...
on Oct. 14 2010 at 3:23 pm
Tayrodactyl PLATINUM, Palmyra, Indiana
20 articles 1 photo 62 comments
View profile
This made me laugh. You should write more stuff like this :)
addisonmc521 GOLD said...
on Oct. 13 2010 at 4:14 pm
addisonmc521 GOLD, Oak Harbor, Ohio
12 articles 16 photos 27 comments
View profile
FLIPPING AWESOME. LOVED IT.